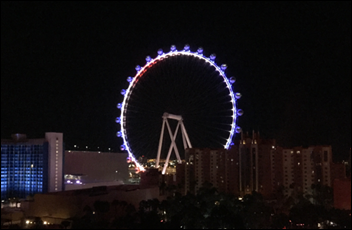 Oh, how naïve I was to think that I could sleep past 4:30 am Vegas time … The early start was actually a good thing, giving me plenty of time to get my bearings, enjoy the eventually beautiful sunrise, and prepare for the day’s events. 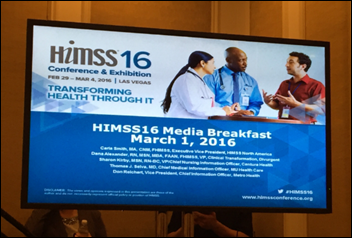 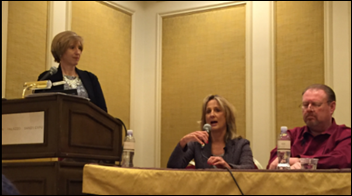 My first stop was the HIMSS16 Media Breakfast, during which panelists from HIMSS, including HIMSS North America Executive Vice President Carla Smith, Divurgent Vice President of Clinical Information Dana Alexander, and Metro Health (OH) Vice President and CIO Don Reichert took members of the press through results of the association’s 27th annual leadership survey. The two big takeaways seem to be that more and more providers are including a clinical IT executive in their C-suites – a trend that is having a “notable impact on the organization’s orientation toward health IT.”

The other is the association’s long overdue focus on the gender-based wage gap, and the larger conversation that opens up about diversity. Survey findings indicate that women lag behind men by about $25,000 in compensation for C-suite roles. Kudos to Smith for taking the lead on bringing these statistics to light. She and her team are hopeful that the findings will lead to additional research that will in turn evolve into HIMSS resources and programs focused on engendering diversity in organizations that have historically been led by white males. Reichert held up Metro Health as an example of an organization that has made a conscientious effort to focus on diversity in its hiring practices via new programs. Perhaps that’s the kind of case-study session HIMSS needs to think about offering next year in Orlando. 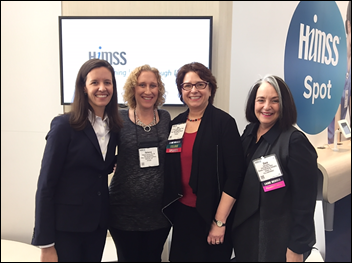 I headed over to the HIMSS Spot shortly after the breakfast, where I caught up with ONC CNO Rebecca Freeman, RN University Hospitals Health System Interim CIO Sue Schade, and Encore Health CEO Dana Sellers at the #healthITchicks meetup. All three had great advice to share on balancing work and life, especially when caring for young children and aging parents; working in a male-dominated field; and encouraging young women to learn more about STEM. 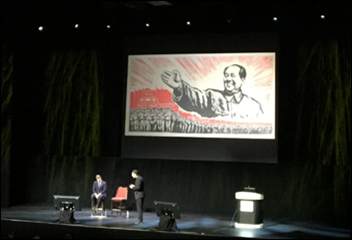 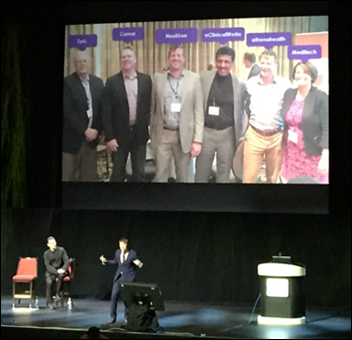 My favorite session of the day by far was the lunchtime “View from the Top” featuring Beth Israel Deaconess CIO John Halamka and Athenahealth CEO Jonathan Bush. The duo tag teamed a talk about how far we’ve come in health IT, how far we have to go, and the opportunities that are staring us right in the face. Their talk was a bit toned down compared to their on-stage antics at HIStalkapalooza the night before. I had no idea Halamka was such a great speaker, or that he is the nation’s leading expert on poisonous mushrooms and plants. Apparently he does a brisk business in telemedicine visits with parents of children who’ve eaten mushrooms (the garden-variety kind and the psychedelic kind) , and adult nature lovers who are convinced the wild variety they find in the woods will go great in homemade stroganoff.

What was perhaps most interesting to me was the juxtaposition of Halamka’s humorous (the Chairman Mao-Meaningful Use analogy was hilarious) yet critical eye towards government regulations with Bush’s obvious ability to make money off of those burdensome, click-inducing regulations. Yes, the top vendors can get together at posh resorts and commit to sharing data with one another (as the picture above shows them doing at the recent KLAS summit.) Yes, they can publicize their pledge to HHS that they will help consumers access and share their health data, preclude information blocking, and implement government-friendly interoperability standards … but what will that look like in practical terms and how long will it take? As CMS Acting Administrator Andy Slavitt mentioned during a media briefing later in the afternoon, we’ve really got to push vendors to do the things they say they’re going to do. There’s no letting up if the journey towards interoperability is ever going to progress. 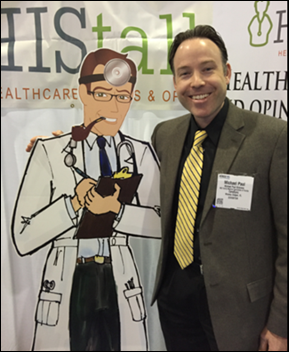 Things lightened up once I headed over to the HIStalk booth. (If you’re looking to find us in the 5000 row, wind your way through or around Epic then head straight back. We’re near the fun folks at MedData and next to Stericycle, which has a fun array of gummy candies to nosh on. I had the chance to chat with “HIStalk Celebrity Lawyer” David Schoolcraft, who I hope will swing back by and keep me company at some point. I also got to pick the brain of passers by including Michael Paul Gimness, MD (above) of Family Medical Specialists of Florida and Mike Narumiya, director of data and information systems at North Central Texas Trauma.

Gimness, whose practice runs Allscripts and Caresync for CCM was roaming the aisles in search of additional population health tools to help him make the move towards value-based care. Given that I had just spent come out of a media briefing with Andy Slavitt, I asked Gimness about his thoughts as an independent doc on MACRA. “I feel MACRA’s coming, and it’s going to stay. They can say they’re getting away from MU, but they still have to have a carrot and a stick when moving towards population health and value-based care. I don’t like docs getting penalized, but it’s the government’s money and they can do what they want with it. I can’t opt out of Medicare or Medicaid. My staff is not going to take a pay cut.”

Narumiya, meanwhile, was on the hunt for security tools, which were easy to find given that, in his opinion, at least a third of the booths had products related to privacy and security. (Thus far both he and Dr. Paul have validated my initial predictions of cybersecurity and population health management being big items of interest at HIMSS. Validation feels good.) He has shied away from looking into products from the big vendors, opting instead to focus on smaller companies and startups. He also mentioned that his organization has been happy with encryption tools from DataLocker. 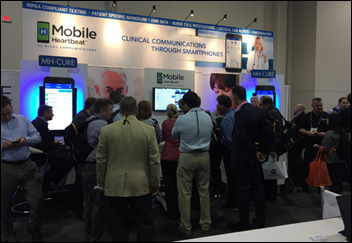 The fun folks at Mobile Heartbeat trekked across the aisle to introduce themselves to us. Their booth seemed to have consistently busy traffic. Providers must still have a strong interest in migrating from pagers to mobile clinical communications (or making a vendor switch). 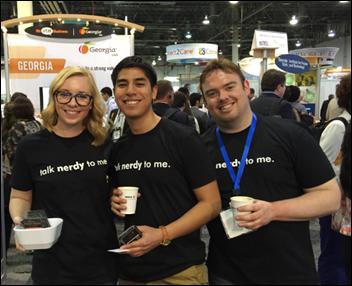 I didn’t spend much time wandering around the exhibit hall today. I’m pretty sure Mr. H and Dr. Jayne will cover that part of the conference in their typically excellent fashion. I did make a point to stop by the Georgia HIMSS reception to say hi to friends. On the way I just had to snap a pic of the ScienceLogic trio above. I wonder if they’ll give me a shirt if I talk nerdy to them? 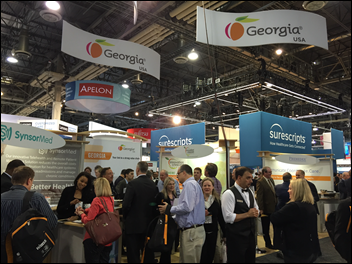 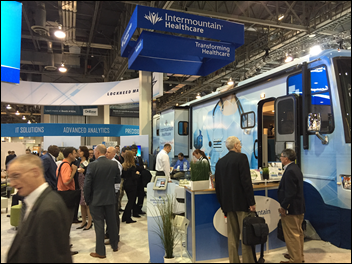 The reception was buzzing, as was the Intermountain Healthcare bus. I wonder if I could sneak on board and use what I’m sure is far more reliable WiFi than the tenuous exhibit hall connection provides. Intermountain CIO Marc Probst – who was coincidentally up for a HISsie – seemed very excited about the bus when I interviewed him a few weeks ago. He mentioned that he too will be looking for security solutions during the conference. 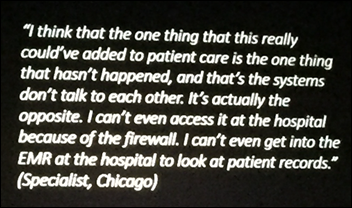 My last session of the day featured a fireside chat with National Coordinator Karen DeSalvo and Andy Slavitt. The two seemed completely at ease with each other – joking about their tendencies to be positive (DeSalvo) and negative (Slavitt). Slavitt humorously pointed out that of course DeSalvo’s positive – she spends her time with technology and vendors. He, on the other hand, has been spending a lot of time lately with grumpy physicians. The two took a good hour to cover the evolution of Meaningful Use and hopes for MACRA, highlighting the aforementioned pledge from healthcare stakeholders to make EHRs work better for patients and providers, and the just-announced “FHIR Cloud” – a new FHIR app ecosystem that will incorporate app challenges and resources to help providers and consumers take advantage of innovative tools based on open APIs.

My favorite part of the presentation came when Slavitt started getting into the nitty gritty of his recent physician focus groups. The comment above is just one of hundreds he’s been listening to throughout the course of eight meetings with providers. A telling comment: “To order aspirin takes eight clicks on the computer. To order full-strength aspirin, 16. That’s not patient care. It’s clicks.” 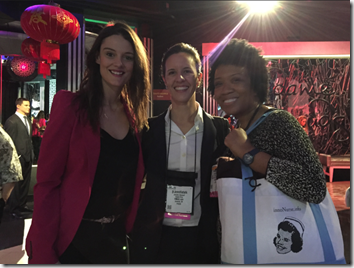 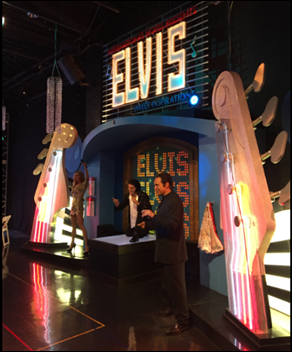 My evening ended at the HIMSS Women in Health IT Reception at Madame Tussaud’s –  a unique venue if ever there was one. I spotted DeSalvo mixing and mingling. I wonder if she thought the figurines were slightly creepy like I did. I did end up taking a pic with Andre Agassi, just to show my tennis team. All in all, my second day at HIMSS proved to be fun – great sessions, tremendous networking, and beautiful weather. Now if I could just manage to sleep a little later …