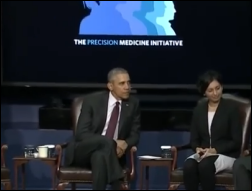 From the transcript of President Obama’s remarks Thursday about the White House’s Precision Medicine Initiative:

Part of the problem with have right now is that every patient’s data is siloed — it’s in a hospital here, a hospital there, a doctor here, a lab there. The goal here is if we can pool and create a common database of ultimately a million people that’s diverse so that they have a lot of genetic variation, we can now take a disease that may be relatively rare, but because we have a pretty large sample size and start seeing patterns that we might not have seen before. But a couple things that requires — it requires, first of all, us understanding who owns the data. I would like to think that if somebody does a test on me or my genes, that that’s mine, but that’s not always how we define these issues …

In terms of the model that we use for health records that hopefully will be digitized more and more, companies help hospitals keep and collect that data. They should get paid for that. They’re building software. They’re building an infrastructure. On the other hand, we don’t want that data just trapped. So if I am sick and voluntarily I want to join with other people who have a similar disease to mine and donate our data to help accelerate cures, I’ve got to be able to work with the electronic health record companies to make sure that I can do that easily. There may be some commercial resistance to that that we have to talk about — although we’re seeing some terrific participation now, and that’s part of what we’re announcing, of those companies in terms of helping that happen. 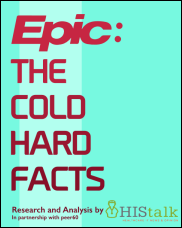 From Sitz Bath: “Re: your Epic report. How many people downloaded it?” About 1,200 that I know of, but the Politico people messed me up by publishing a direct link that avoided the sign-up page I had created to keep count. You can download it here.

From CMIOmaha: “Re: your Epic report. Much appreciate the amazing summary on Epic. The most objective and down to earth summary I’ve ever seen. I downloaded it this morning and shared with all our C-level with an immediate and incredible feedback! I wish you’d do the same with Cerner.” Maybe it would be interesting to ask the same questions to the executives of Cerner users. Peer60 did all the heavy lifting via their market feedback platform, so it wouldn’t take much of my time.

From HIMSS PR: “Re: Greenway Health. Second staff reduction in the past six weeks. Sales leadership and enterprise sales team taken out. Not the best PR heading into HIMSS.” Unverified. 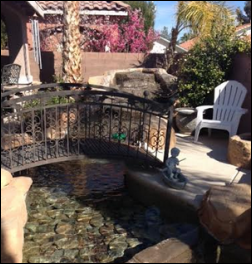 I’m writing this Saturday from Las Vegas, where it’s sunny and warm. I rented a huge, luxurious house five minutes off the Strip for $200 per night and it’s filled with friends and family (all female, I just realized) who are helping with HIStalkapalooza. We have a heated pool and hot tub in our outdoor oasis, so last night it was pizza and this afternoon I’m grilling hamburgers and hot dogs poolside. I fell asleep last night to the gurgling of the hot tub’s waterfall outside after catching up on emails on the 25-megabit Wi-Fi (take that, crappy hotel Internet made worse by guests streaming Netflix and porn). It’s nice to be able to relax before the madness starts Monday, not to mention that I’m saving a fortune in hotel and restaurant bills. I should hang the HIStalk booth banner over the garage door.

I’m not sure when I’ll post over the next couple of days. Certainly Monday night after HIStalkapalooza (which means I won’t sleep much before a long Tuesday), but maybe Sunday if anything interesting happens.

I was amused that the marketing manager of a vendor I highlighted as misspelling HIMSS on their site emailed me to accuse me of Photoshopping the screen shot, saying they had spelled it correctly. However, the sneaky alterations were on their end – they took down the page with the misspelling and posted a new one, perhaps not realizing that I could simply email them a link to Google’s cached image of the original page to prove my point. Doh!

The results of the reader-requested poll of health systems allowing the use of test patients in production systems are as follows:

Concerns listed by respondents include the possibility of dropping real charges, the downstream effects on interfaced systems, and inadvertent printing of documents (I’ve seen all of these). 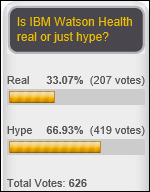 It’s beyond hype. They have now officially taken what was a brilliant branding strategy (personifying the intangible and making it both relatable and revolutionary sounding) and turned it into pure silliness. The Phytel acquisition last year was when my red flags were raised being that pop health is still just a buzzword, vapor and yet to be proven, but this addition just confirms that IBM is just trying to over-PR their revenue shell game. What is funny is that Truven began as the mixed bag business unit of Thomson Reuters after they went on a silly publishing buying binge while the publishing world was crashing (PDR, Micromedex, etc.). Thomson couldn’t find a way to blend those brands well into their financial and media strategies and spun them off, which resulted in Truven. How IBM is going to find a better fit for these brands that were too out-of-date for an old publishing co company is beyond my logical understanding. It makes me speculate that IBM may want to closely observe what is currently happening to Xerox. Bottom line, I no longer view Watson with the shock-and- awe wonderment that I once did.

New poll to your right or here: will EClinicalWorks and Athenahealth become major inpatient system vendors? 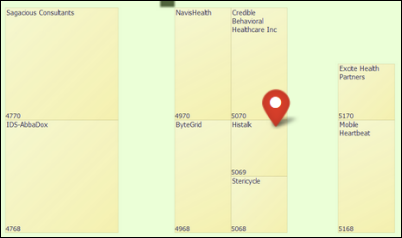 Here’s where Lorre will be spending the week – Booth #5069, with those other companies around us hopefully being OK with the significant traffic of interesting people we bring to an otherwise undistinguished location right next to an area labeled “Chain Link Fence – Storage.” I’m not sure I really get $5,000 worth of value from a 10×10 booth, but I’ll feel better about spending the money if everybody at least drops by to say hello.

Healthcare IT Leaders donated $1,000 to DonorsChoose to attend my CIO lunch this week, which I used (along with third-party matching money) to fully fund these teacher grant requests while sitting by the pool: 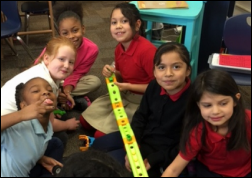 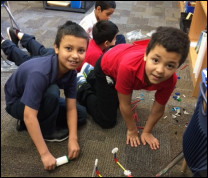 Mrs. Newman reports on the STEM activity kits we gave her Indiana second graders by funding her DonorsChoose grant request: “Thanks to you, my students are benefiting more from discovery learning as opposed to teacher led instruction. With team work, they are working collaboratively building roller coasters to learn more about gravity. They are also reading instructions on how to incorporate levers and pulleys into their creations. It is so exciting to watch them in action! Your help in providing these amazing STEM materials has been appreciated by my students, parents, and myself. Thank you very much!”

Also checking in is special education teacher Mrs. Allen from South Carolina, who reports, “My students were so excited when they came back from Christmas break to new headphones! They actually want to use the computers now … They have begun taking pride in our computer center and want the computers to look neat … I had no idea that something as simple as headphones could make such a difference in the attitudes of my students.”

We’re running a HIMSS special on webinars. Contact Lorre or see her at our booth #5069 (don’t blink or you’ll miss it).