From Fair and Balanced: “Re: Epic. Our support rep has been asking questions about one of our projects, saying Epic recently started an intra-company contest for writing news stories about positive client developments. She and I both speculate that Epic is looking for stories to feed to actual media outlets. If that’s the case, I’m uneasy that Epic is going to this length to promote itself in relying on its own employees for good news rather than for it to come about via independent parties noticing it.” Unverified. I’m not sure I would find that practice objectionable other than it seems to violate Epic’s unconvincing insistence that it doesn’t practice sales and marketing. Industry magazines and sites will cover anything that a vendor or provider hands them on a silver platter regardless of news value, but it’s a tougher sell to newspapers. I was once approached by the local big-city newspaper about a story that their highly visible technology reporter was writing about mobile devices. As I was taking him around to interview people at our hospital, I was surprised at how clueless and generally weird he was (he carried what looked like a purse and stopped every five minutes to squirt drops into his eyes, plus he didn’t seem to know much about technology). The resulting piece was superficial and not insightful since he simply regurgitated selective quotes from our folks, which is probably why I’m disdainful of former reporters who proclaim themselves health IT experts simply because they’ve spent a few years working at that superficial level.

Listening: Intronaut, LA-based jazzy progressive rock whose sound ranges from a jamming Alice in Chains to a heavier Tool. Also, one of my favorite bands, Zip Tang, masters of complex progressive rock now evolved to a power trio with the departure of the amazing Marcus Padgett (saxophone, keyboards, vocals, and most relevant to health IT, SVP of Experian Health). 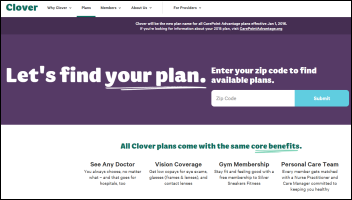 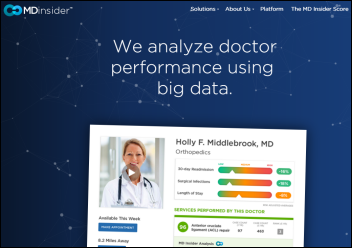 Data-driven physician performance website MD Insider raises $12 million, increasing its total to $24 million. The round was led by Summation Health Ventures, an investment fund started by Cedars-Sinai and MemorialCare Health Systems, with Cedars-Sinai CIO Darren Dworkin joining the company’s board. 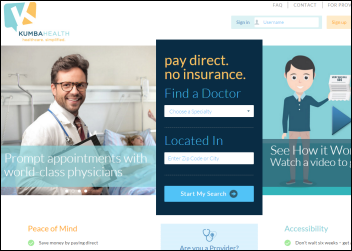 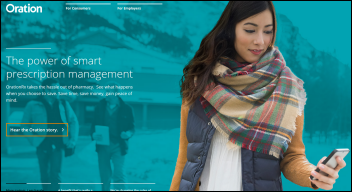 Oration, which offers prescription buying tools for the employees of large, self-insured companies, releases its first app and announces $11.2 million in Series A funding. 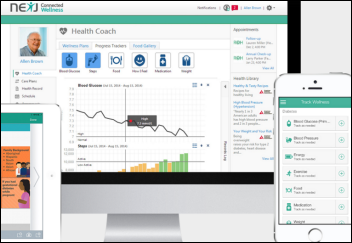 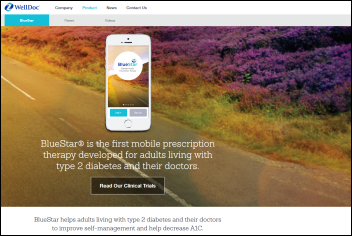 WellDoc, which offers a prescription-only diabetes management app, raises $22 million in Series B funding, increasing its total to $27 million.

Cerner says 93 percent of its 17,000 US employees have  signed away their right to sue the company in return for $500 in stock options and ongoing eligibility for merit increases. An expert says it’s the only example he’s seen where a company will limit future merit increases to employees who decline to sign its arbitration clause. 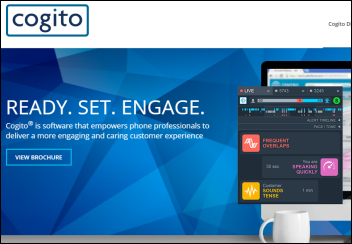 The VA contracts with Cogito Corporation, which sells voice guidance technology for telephone salespeople, for software that can assess the mental health of participating veterans by analyzing their telephone conversations.

Paul Kleeberg,MD (Stratis Health) joins Aledade as medical director. He served on the HIMSS board from 2011 through 2015 and was its chair through June 2015. 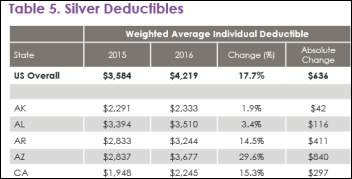 Robert Wood Johnson Foundation releases a dataset of all insurance plans offered on health insurance marketplaces in 2015 and 2016, supporting state-by-state analysis of premiums, deductibles, and other plan attributes. For example, the dataset shows that prices increased an average of 10 percent for all tiers in 2016, while silver plans in Alaska saw the largest jump at 35 percent to an average premium of $643. 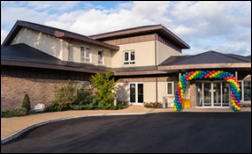 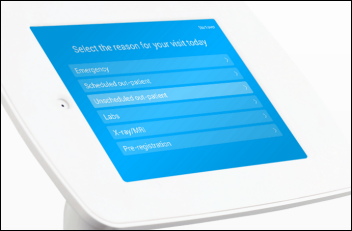 Columbus, OH-based CrossChx launches its Queue fingerprint-based check-in kiosk for hospitals that it says reduces wait times by 80 percent. The company says it links a fingerprint to hospital EHR data to provide interoperability when its customers check in somewhere else. Founder and CEO Sean Lane is a former Air Force intelligence officer and NSA fellow who served five tours in Afghanistan and Iraq before founding Battlefield Telecommunications Systems. 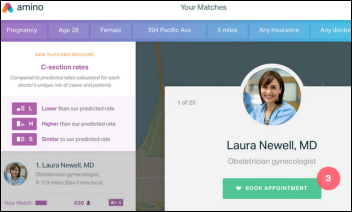 HHS says few states have accepted available federal money to support data-driven Medicaid fraud detection even as improper payments have nearly doubled to 10 percent. The states that were contacted by Modern Healthcare gave several reasons: they have their own data mining efforts, they are trying to figure out if it would help, or they’re waiting to see what other states do before jumping in.

LifeLock will pay $100 million to settle FTC charges that it overstated its data protection capabilities and engaged in deceptive advertising. 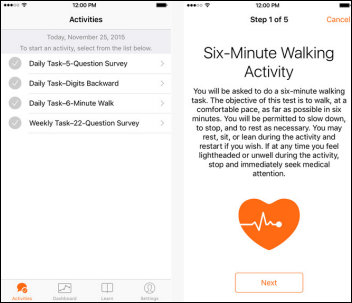 Madison magazine reviews the impact of Epic on Wisconsin, observing that it attracts huge numbers of liberal arts degreed young professionals who often leave the company after a few years but remain in the Madison area, giving Wisconsin an enviable population of high-achieving Millennials. 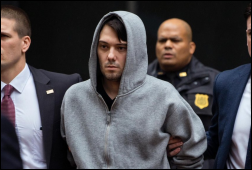 Turing Pharmaceutics CEO Martin Shkreli, the most-hated man on the Internet for hiking the price of old but important drug Daraprim by 5,000 percent after acquiring it, is arrested by federal agents and charged with securities fraud. Prosecutors claim Shkreli played a Ponzi-like financial shell game while with Retrophin, a drug company he started before Turing that eventually fired and sued him. Shkreli had previously mocked the lawsuit, saying, “The $65 million Retrophin wants from me would not dent me. I feel great. I’m licking my chops over the suits I’m going to file against them.” A wag observed that Shkreli was arrested only after he bought a rap album and started wearing hoodies, another dubbed him “Karma Bro,” while The New Yorker’s satirical piece was headlined, “Lawyer for Martin Shkreli Hikes Fees Five Thousand Per Cent.”

Former BIDMC CEO Paul Levy writes that news media misreported details about President Jimmy Carter’s cancer, running click-baiting headlines that gave credit to a “miracle drug” (which has actually performed poorly in clinical trials) while downplaying the likely impact of surgery and radiation therapy. Levy quotes a freelance health reporter’s comments at a medical summit in 2009 that sums up the state of medical and health IT journalism pretty well:

It is not our job to satisfy you [physicians], but to keep our readers reading and our viewers viewing. The more responsible the press becomes, the less readers seem to like it.

A fourth co-conspirator pleads guilty to impersonating a Cerner employee in selling medical equipment and $6 million in investments from 50 physicians.

Kaiser Permanente will start its own medical school that will train students on its integrated style of care. The California-based Kaiser Permanente School of Medicine will admit its first class of 48 students in 2019. 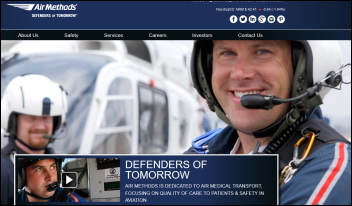 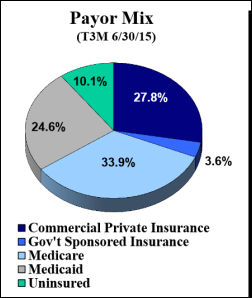 Another medical helicopter goes down as two crew members die in an Arizona crash. It was operated by the publicly traded, Colorado-based Air Methods, the self-styled “defenders of tomorrow” that operates medical transport services as well as its 60-aircraft helicopter tourism operation (the recently acquired Blue Hawaiian in Hawaii and Sundance Helicopters in Las Vegas). It also runs a billing company for other medical transport companies, including EMS agencies and ambulance services. The company earned $741 million in revenue where it staffs its own aircraft with medical personnel and bills the patient directly, as well as $162 million from hospital contracts. It earns an average of $12,000 in net revenue per patient transported. As the pie chart above illustrates, federal taxpayers provide 60 percent of the company’s patient revenue. Air Methods likes healthcare reform, predicting that more widespread insurance to pay for its transport services will increase its annual revenue by $31 million. The company’s investor presentation lists its #1 operational challenge as “accidents.” The Glassdoor reviews of Air Methods are pretty bad, with a common theme being that it isn’t really focused on the safety of patients and staff. It has a commendably obtuse and high-falutin’ but questionably punctuated mission statement: “To be the dominant global expert of comprehensive, vertically-integrated, critical care access solutions supporting patient logistics—the movement of patients and their medical analytics.”