The Department of Defense awards a $4.3 billion renewable EHR contract to the team of Leidos, Accenture, Cerner, Henry Schein, and 31 partner companies, with the DoD estimating its total project cost at $9 billion over 18 years. The roster of companies in the Leidos Partnership for Defense Health includes:

Most interesting of these subcontractors is the apparently defunct Ocean Bay Information & Systems Management LLC, launched in April 2012 in Alaska and shut down in December 2014 without an online trace. Its founder, Ernest Anastos, lists his current occupation as “versatile executive seeking new challenges.” The meaty part of his bio is further down the page: he was a former CEO of the Navy Medical Information Management Center and handled Navy acquisitions (DHMSM is a Navy project).

From HIPAA Love: “Re: requiring a signature on patient information requests. It’s not a HIPAA requirement, but HIPAA allows covered entities to require individuals to make their requests in writing as long as it tells them so.” Thanks. That means hospitals and practices that require patients to fax or mail a signed request form are just making their own rule, not enforcing a HIPAA requirement.

From Denominator: “Re: former Epic employees. Profiled on a Madison site.” The article describes a few former Epic project managers and implementation consultants who struck out on their own after growing tired of endless travel, long hours, and lack of personal satisfaction. They twenty-somethings report changing jobs to fulfill their true passions despite walking away from an average Epic salary of $83,000.

From Red Man Walking: “Re: companies and CEOs. Which ones have you advised or worked with?” None. My life’s work seems to be sitting in an empty room filling an empty screen every single day, but perhaps I’m missing an opportunity to become a “Consigliere to the CEO Stars,” where I would serve as the invisible, ambition-free, bias-free source of truth for CEOs who don’t trust their ambitious, biased VPs to challenge their decisions, provide brutally honest advice, or provide a spin-free assessment of what customers and the market are saying. I like to think that my complete lack of qualifications (having never run a business or climbed the executive ladder) is offset by my naive objectivity and lack of a socially acceptable verbal filter. 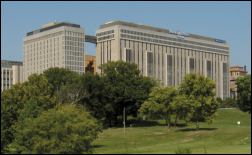 From Festus: “Re: BJC HealthCare. Experienced a system-wide computer outage this week.” The St. Louis-based system goes down for 20 hours through Wednesday morning, leaving its 13 hospitals with no access to its EHR, administrative systems, and email. The hospitals went back to paper and turned away transfer patients. BJC hasn’t announced the cause, although with all systems down you would have to assume network problems or maybe even a malware attack since otherwise I would expect the hospital to have diagnosed and announced what went wrong.

You may have noticed that you couldn’t bring up the HIStalk page for part of Wednesday afternoon. So many readers were looking for DoD news that my web hosting provider initially thought it was a denial of service attack. Even though the site couldn’t handle all the readers with the server’s CPU usage needle pegged, it still received 16,000 page views in 12,000 unique visits Wednesday, which I’m pretty sure is a record. I’m writing this Thursday evening and today’s numbers are tracking just about as high. A couple of people emailed me to say that I should start a DoD EHR site, although I think interest will wane as the hard work goes underground and there’s not much to talk about for a year or two.

Here’s a shout-out to Carla from Health Data Specialists, who asked for a “we sponsor HIStalk” website badge since they are fans. I didn’t give much direction to the offshore guy to whom I paid $15 to design the graphic figuring it wasn’t all that important, but Carla was right  – dozens of sponsors have asked for it for their own sites after I mentioned it in my email to them. It’s gratifying to be supported so enthusiastically.

Add to my list of ways providers can make patient electronic records requests easier by sending me your ideas. Here’s one I received:

Provide several ways for patients to request them. Over the phone, online, patient portal, etc. Ensure that in order to receive the records, patient needs to provide several key identifiers that ensure the information is secure and is only provided to said patient (or patient POA). Have a dedicated person and/or department handle these requests so that there is an efficient process and patients don’t have to wait to receive information that is rightfully theirs.

Thoughts on the DoD’s selection of Leidos, Cerner, Accenture, and Henry Schein

Speaking of the DoD, it’s a good time to re-watch Dim-Sum’s September 2014 HIStalk webinar titled “DHMSM 101: The Hopes, Politics, and Players of the DoD’s $11 Billion EHR Project,” which has been viewed a couple of thousand times on YouTube. Spoiler: Leidos wins at the end.

We also just finished “De-Silo Your Disparate IT Systems Around the Patient with VNA” by Lexmark.

McKesson reports Q1 results: revenue up 9 percent, adjusted EPS $3.14 vs. $2.47, beating analyst expectations for both. Technology Solutions revenue was down 7 percent due to the company’s anticipated drop-off in hospital IT business and the sale of its nurse triage operation, but tempered by good performance from RelayHealth and the physician revenue cycle business. CEO John Hammergren said in the earnings call that, “We have been struggling in the hospital IT business, where we have been reinvesting in the go-forward products and de-investing in the products that we’ve already announced that we plan to sunset” as the company tries to “put the momentum back in the business.”

CVS Health will co-develop a chronic disease care management solution with IBM’s Watson group, planning to sell it to insurers and use it in its own pharmacies and MinuteClinics. 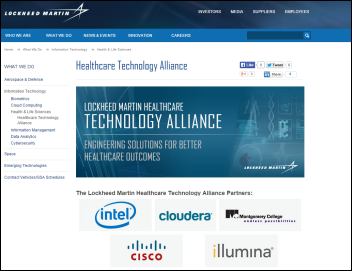 Lockeed Martin exhibits atrocious timing in announcing its Healthcare Technology Alliance the day Leidos and Accenture hogged the government contractor limelight with the DoD’s announcement, but if anyone cares, the Alliance’s founding members are Cisco, Cloudera, Illumina, Intel, and Montgomery College. 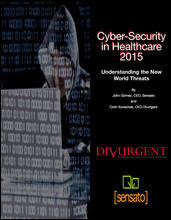 Rep. Renee Ellmers (R-NC) introduces the Flex-IT 2 act that would delay Meaningful Use Stage 3 until at least 2017. CHIME chimes in with its support for the bill, saying it will ensure Meaningful Use’s “long-term vitality,” meaning it likes the EHR welfare program as long as the provider bar is set low enough that everybody collects taxpayer cash, not really buying into the idea that the MU program was supposed to be a  short-term, cash-for-clunkers stimulus project. 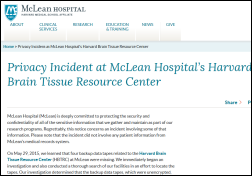 Partners HealthCare-owned McLean Hospital loses four unencrypted backup tapes containing information on 12,600 people who have designated their brains to be donated upon their death. 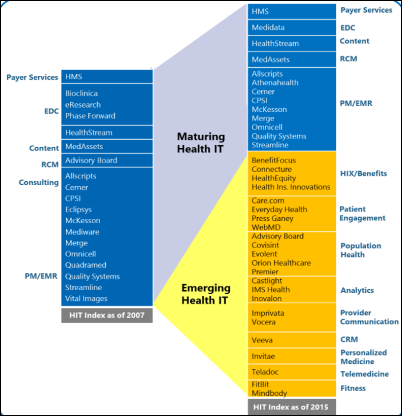 Healthcare Growth Partners publishes its mid-year health IT review with a focus on IPOs. I can’t say enough about HGP’s reports – they are stellar at summarizing the challenges and opportunities of healthcare and healthcare IT in a macroeconomic way. HGP gives their reports away when other firms produce reports with a tiny fraction of their insight and charge handsomely for them. The graphic above nicely compares the 2007 publicly traded health IT market to that of 2015. I also enjoyed this brilliant summary of US healthcare:

Healthcare spending in the US is about 90 percent higher than in most other industrialized countries. The US ranks #46 out of 48 in terms of efficiency – one place below Iran, and that’s without economic sanctions. Inefficient markets typically result in a mispricing of goods and services. The cause is often due to monopolies, poor regulation, and a lack of market transparency. Each is a contributor to inefficiency in the US healthcare economy, but the primary shortcoming is the lack of market transparency, or information, needed to define the cost and quality of goods and services, otherwise known as value. Restated, we must define the cost of care and we must define the quality of care in order to determine the value of care. That information then must be made available to consumers who can act on it to create a market-based economy, which in turn theoretically leads to outcomes and efficiencies. The concept of “value” is behind nearly all health IT investment activity, and in a market as personalized and complex as healthcare, the amount of investment required to achieve it is staggering.

Four hospital ED nurses in Saudi Arabia face prosecution for causing injuries that require a six-year-old’s hand to be amputated after their failed attempt to start an IV.

HIMSS is attempting to insert itself into the DoD’s EHR project by announcing how happy it will be if someone will just invite it to participate, so I will issue an equally self-serving statement of my own:

As the Department of Defense moves forward with its modernization project, Mr. HIStalk is committed to working closely with the DoD on the planning and implementation stages in providing biting commentary for those involved.

Weird News Andy applies his own product name of “iDon’t Touch” to iSperm, which turns an iPad into a sperm counter. WNA also likes this story about nice Canadians (he says the term is redundant) in which a woman stuck in the ED with her sick child posts her status to a Facebook new moms group worrying about her car being towed, after which several strangers feed the parking meter until she is able to leave. WNA pipes up one more time to comment on the CVS-IBM Watson story, titling it, “Come here, Watson, I need you” in picturing a CVS customer answering Watson’s questions about intestinal distress with, “Alimentary, my dear Watson.”