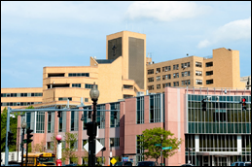 From Dirk Diggler: “Re: startups. I wondered what your number one piece of advice for them would be.” I could make a long list of the potholes that have consumed a bunch of companies, but I think my top item would be to understand that you can start a business without hanging the limiting “startup” label on yourself. Startups refer to companies that accept a bunch of investor money (or would like to) and therefore are wed to the concept of growing fast and big by solving a big problem before their corporate clock runs out, which requires many simultaneous talents. The risks are extensive and the chances for success are small, sort of like swinging wildly for the fences with every at bat hoping for a miracle. You can create a perfectly nice and solid business with less risk and potentially better return by just finding your niche and working it well, avoiding the temptation of giving away equity (and thus control) to investors who see things differently and who just might fire you down the road. Small business skills are very different than startup-to-IPO skills and people aren’t always good at judging which (if either) they possess. Companies should stop using the “startup” label once the initial inflated optimism has been tempered by the passage of time or the lack of traction that suggests it’s just a business, not really a startup. It’s also true that while a few companies have made it big because they had a fresh idea, it’s mostly solid execution and perseverance that trumps brilliance.

Sixty percent of poll respondents say they’ve user a provider’s portal in the past 90 days. HIS Junkie added comment, “And it was in error and was virtually useless.” New poll to your right or here: have you completed an Advance Directive?

Grammar and usage gripe: people who pronounce “chipotle” as “chipolte” even when seeing it in writing. 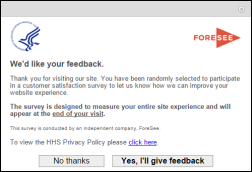 A note to sites that shove annoying survey pop-ups in the faces of people who might otherwise have been interested in what the site offers: my feedback is that I leave the site immediately. It’s like entering a business and being intercepted by a survey-taker even before you can get in the door to see what they’re selling. Girl Scouts know you sell cookies to people leaving the store, not those going in.

A reader asked me to describe the steps I took in trying (unsuccessfully, as it turned out) to get an electronic copy of my medical record from a hospital that should be able to provide it (EMRAM Stage 7, Epic, MU Stage 2). Here you go.

The records request page on the hospital’s website offers two options: dropping by personally to the hospital’s HIM department (which was clearly their preference) or downloading, completing, and faxing a form (which could have been easily converted to an online form to eliminate the ridiculous faxing step). The form was complicated since it was primarily designed for patients who want to give someone else access to their records, such as for a workers compensation claim – they really should create separate forms to avoid awkward references to “the patient” when it’s the patient making the request. It also asked for the medical record number, which hospitals frustratingly expect patients to learn and remember. The form also didn’t give an option for paper vs. electronic records. It mentioned that unstated fees would be charged (hospitals are always terrible at price transparency) and that the hospital uses an outside release of information vendor that would be following up. It didn’t ask how I would like to be contacted.

I called HIM since I had heard nothing about my request. They said they hadn’t done anything because I hadn’t provided dates of service for my one and only encounter with the health system (since I couldn’t remember the date). They looked it up and said they would mail the records. I told them I wanted them in electronic form. The HIM person said they don’t provide electronic information to patients, only to physicians. I said they were obligated to do so and she said she would get back with me after talking to her supervisor.

I called the hospital’s Epic MyChart support to see if I could download my records. They created an account for me, but it did not show any hospital admissions even though the labs from my very short stay were listed. A couple of issues might have caused the average patient to stumble – the support page wasn’t consistent in terminology (“activation code” vs. “access code”) and MyChart was fragmented between inpatient and outpatient visits with links to jump from one to the other (“visit” versus “inpatient admission.” The login page also didn’t render correctly in Firefox.

I entered a MyChart system message asking the hospital to check on why my admission wasn’t visible. It promised a response within two business days. I still haven’t received one.

I called the hospital’s MyChart support number again. The tech was clearly not even seeing the same screens I was since she tried to walk me through finding my admission. None of the tabs or menu options she asked me to click were present. She mentioned a link she was seeing called “MyChart Administration” and I asked if perhaps she wasn’t logged in correctly since that didn’t seem like an option a patient would see. She was confused and could not understand why her screens didn’t match mine. We gave up at that point and she offered no alternative.

I haven’t heard anything from the health system or OCR. I’m glad I didn’t need the records urgently.

My conclusions so far:

July 14 (Tuesday) noon ET. “What Health Care Can Learn from Silicon Valley.” Sponsored by Athenahealth. Presenter: Ed Park, EVP/COO, Athenahealth. Ed will discuss how an open business structure and strong customer focus have helped fuel success among the most prominent tech companies and what health care can learn from their strategies.

July 22 (Wednesday) 1:00 ET. “Achieve Your Quality Objectives Before 2018.” Sponsored by CitiusTech. Presenters: Jeffrey Springer, VP of product management, CitiusTech; Dennis Swarup, VP of corporate development, CitiusTech. The presenters will address best practices for building and managing CQMs and reports, especially as their complexity increases over time. They will also cover quality improvement initiatives that can help healthcare systems simplify their journey to value-based care. The webinar will conclude with an overview of how CitiusTech’s hosted BI-Clinical analytics platform, which supports over 600 regulatory and disease-specific CQMs, supports clients in their CQM strategies.

Patrick Swindle, manager of IT systems support at East Texas Medical Center, is promoted to administrator of ETMC Quitman. 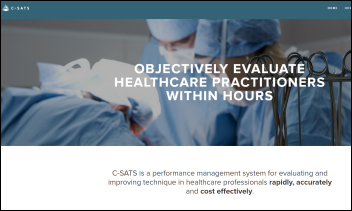 The Seattle business paper profiles University of Washington spinoff C-SATS (which stands for crowd-sourced assessment of technical skills), which evaluates surgeons by having videos of their procedures reviewed by experts. Some of the executive team members came from Classmates.com. The company just raised $2.5 million.

A site claiming to have inside information about the next version of Google Glass – marketed to enterprises, not consumers – says it will include a larger prism, more processing power, better battery life, and support for 5 GHz band video streaming. The move to enterprise is smart since Glass was never going to be socially acceptable in public, but that shouldn’t be a problem where the role of its user is known, such as a patient seeing a doctor wearing Glass. It will still be geeky, but at least less creepy.

Cerner responded to my question about the DoD’s CoPathPlus award that was announced last week. It was a new procurement outside of the DHMSM award, which was obvious, but more importantly it was not a renewal of DoD’s previous CoPath contract or an upgrade to that product. It still seems odd that both Cerner and Sunquest sell CoPathPlus and that Sunquest sells two anatomic pathology products. 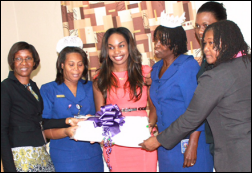 A Caribbean newspaper profiles Modernizing Medicine software consultant Chantel Kelly, who was so moved by pleas for supplies in Jamaica’s hospitals that she personally bought bed linen for all of Kingston Public Hospital. Surgeons say they’re operating wearing plastic bags instead of surgical aprons because it’s all they have, so Kelly says she will buy them surgical and patient gowns next. 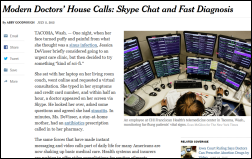 A front-page New York Times article reviews virtual visits and the increasing number of insurers willing to pay for them, noting that they cost a lot less than in-person visits but adding that they may drive up overall healthcare costs since the patients might just have stayed home untreated with self-limiting conditions otherwise (an excellent point). A first-time virtual visit patient with a toothache reports her experience as, “I was in so much pain, I didn’t care that it was weird. He got right to the point, which was what I wanted. He prescribed antibiotics and called them into an all-night pharmacy about 20 minutes away.” The article uses the term “virtualist” to describe physicians who provide video visits.

Non-profit investigative journalism organization ProPublica announces that it will release a “Surgeon Scorecard” next week based in its analysis of Medicare complication rates.

The Detroit oncologist who admitted giving chemotherapy to more than 500 cancer-free patients to defraud Medicare and insurance companies of dozens of millions of dollars is sentenced to 45 years in prison.

Lee Memorial Health System (FL), whose certificate of need request to build a new hospital was turned down by the state after a competitor’s complaint, will instead spend up to $140 million to build a hospital without beds. The campus will include a freestanding ED, outpatient surgery center, an imaging center, lab, and medical office space, all tied together by its Epic system and centralized scheduling.