The AMA writes a letter to Rep. Ted Poe to support his bill that would delay ICD-10. The AMA says ICD-10 should be skipped in favor of ICD-11, the first draft of which isn’t due until 2017, explaining that EHR implementation work and introduction of new payment models make 2015 a bad time (hint: it’s never a good time). Failing getting ICD-10 overturned, incoming President Steven Stack says providers should be “held harmless,” presumably meaning getting paid by Medicare no matter what they’ve done in failing to prepare themselves despite years of advance notice. Doctors are vendors and I can’t imagine any other vendor angrily telling its customer how it demands to be paid. That’s like telling your employer it’s their problem to pay you correctly even if you refuse to turn in your timesheet or fill it out incorrectly. Or, me calling up the IRS and making snooty demands about my refund check. On the other hand, CMS and both state and federal governments have proven themselves to be predictably inept at health IT and claims payment rollouts, so I’d be worried too. I’m surprised an insurance company hasn’t offered ICD-10 interruption insurance to practices, although that might indicate that the risk is too high for underwriting.

From Faraway: “Re: Allscripts layoffs. Two since the first of the year. On May 15, they started tapping people on the shoulder, with 40 well-seasoned support analysts terminated from the US help desk. The heck with quality service to the thousands of customers who pay software maintenance every month – they will have to fend for themselves and deal with the language barriers that come with offshore support. Many employees feel other departments will be hit Monday morning.” Several folks have emailed about Allscripts layoffs last week, with the number most often mentioned being 250 people. Regular Reader says it was mostly Touchworks people but also some working on Sunrise. The writing was on the wall given last week’s executive comments during the quarterly earnings call, in which professional services revenue was announced as down and not expected to fully recover anytime soon, the company sold only two new Sunrise accounts and those were 50-bed hospitals, and stock analysts were told that the $6 million in Q1 severance payments won’t end there. You made a big mistake if you bought MDRX shares five years ago – they’ve dropped 27 percent while the Nasdaq was jumping 127 percent. A $10,000 investment in MDRX shares in May 2010 would be worth $7,342 today while the same money spent on Cerner shares would have yielded $32,173.

From Make: “Re: Weird News Andy’s snippets. Am I the only one who wonders whether Andy has a real job or how he finds time to track down these crazy nuggets? Keep ‘em coming, Andy — the news links and your color commentary always make my day!!” WNA’s stories and pithy commentary are a highlight for me, too. He’s been sending them in for years without recognition or reward of any kind. Every year I suggest that he take a bow at HIStalkapalooza and he always declines.

Quite a few provider readers work for employers who don’t impress them too much with their service delivery, with half of poll respondents giving them an A or B and the rest going with lower grades. At least there weren’t too many F scores given. New poll to your right or here: which company’s shares would you buy? 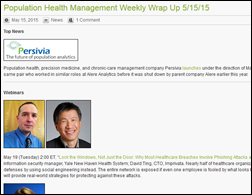 We had all better be interested in population health management, so that being the case, check out Jenn’s weekly wrap-up that runs every Friday. You’ll be up to speed in just a handful of minutes each week.

April 2015 appears to have been the busiest HIStalk month ever because of the HIMSS conference, with 220,000 page views from around 30,000 unique readers in 42,000 unique visits. I don’t check numbers often, but I’m always happy to see that I’m not just talking to myself like I was in those first HIStalk days of June 2003.

Here’s DrFirst’s video of HIStalkapalooza. They got a lot of good crowd shots, so you might see yourself if you were there. 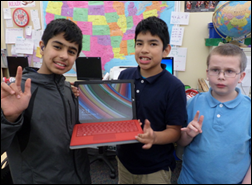 Our DonorsChoose project bought a Surface Pro for math practice by deaf middle schoolers in Washington. Mrs. Burns sent over a photo, adding that our contribution as an “anonymous donor” gave the students new vocabulary words to review as they  “get to imagine our mysterious benefactor.” Every time I get photos like these I remember my early education in a very poor school and wonder which of these kids will, 30 years from now, still remember the excitement of opening that box or using a new tool that got them engaged in a subject that lit the path to their adult lives. I guarantee it will happen.

May 19 (Tuesday) 2:00 ET. “Lock the Windows, Not Just the Door: Why Most Healthcare Breaches Involve Phishing Attacks and How to Prevent Them.” Sponsored by Imprivata. Presenters: Glynn Stanton, CISSP, information security manager, Yale New Haven Health System; David Ting, CTO, Imprivata. Nearly half of healthcare organizations will be successfully cyberhacked in 2015, many of them by hackers who thwart perimeter defenses by using social engineering instead. The entire network is exposed if even one employee is fooled by what looks like a security warning or Office update prompt and enters their login credentials. This webinar will provide real-world strategies for protecting against these attacks.

May 20 (Wednesday) 1:00 ET. “Principles and Priorities of Accountable Care Transformation.” Sponsored by Health Catalyst. Presenter: Marie Dunn, director of analytics, Health Catalyst. Healthcare systems must build the competencies needed to succeed under value-based payment models while remaining financially viable in the fee-for-service landscape. This webinar will outline key near-term priorities for building competency at successfully managing at-risk contracts, with a particular focus on the importance of leveraging data to drive effective decision making 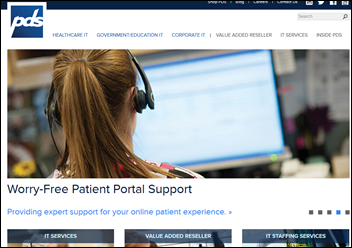 Optum, which in 2013 rescued Healthcare.gov from the mess CMS created with the help of contractor CGI, won’t bid to continue the $40 million per year contract. The company says its job is done and that the experience it gained will “leverage our ability to develop and operate large transactional systems that advance healthcare.” 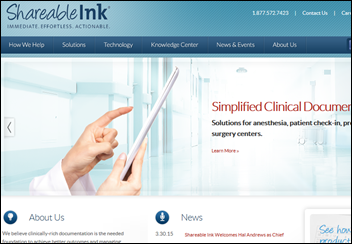 Shareable Ink raises $3 million and plans to bring in another $1 million in funding. 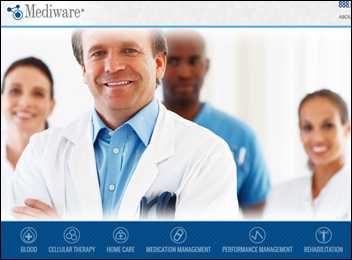 Private equity investor Thoma Bravo will sell Mediware Information Systems, according to a financial report that says the company has engaged William Blair to seek a buyer. The author tossed out a rough price of $400 million. Thoma Bravo’s other healthcare IT-related holdings are Hyland Software and SRSsoft.

Hillary Clinton’s financial disclosure forms filed Friday show that she was paid $225,500 to deliver her HIMSS14 speech. Quite a few healthcare and drug companies retained her pricey oratorical services as well, with the Clintons banking $30 million in just over a year in total income from speeches and books.

Connecticut legislators express interest in developing a state HIE that would replace the work of HITE-CT, which burned through $4.3 million in federal money before it was put out of its misery in 2014 having accomplished basically nothing. 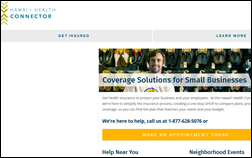 Hawaii state officials say speculation that its  $205 million health insurance exchange will shut down in the next few months is premature, although they admit having to make “hard choices” since the site is losing money, CMS audit problems the found IT and sustainability problems have restricted its federal grant money and state lawmakers gave it only $2 million of the $10 million it requested. Like other states that stubbornly built their own insurance exchanges that have since failed, Hawaii is considering shutting down Hawaii Health Connector and instead piggybacking on Healthcare.gov.


It’s a shameless marketing gimmick that is delivering the obligatory YouTube viral response in pitching a questionably cost-effective healthcare product, but this video of a da Vinci surgical robot suturing the skin back onto a grape while chipper music plays in the background is pretty cute.

Doctors in India question why medical school education doesn’t cover telemedicine even as the country sets up telemedicine centers for rural medicine. A medical school physician says it’s tough to remove the inertia and create telemedicine champions when students haven’t been exposed to it, while a private physician says, “We have an ethnographer who observes doctors and the way they deal with patients in terms of technologies and otherwise. Sometimes, even after training for two weeks, it is so hard to sensitize doctors and make them get used to technologies.”

Newly released tax documents reveal that UPMC paid CEO Jeffrey Romoff $6.4 million in 2013, one of 31 UPMC executives who made more than $1 million. CIO Dan Drawnbaugh, who left in September 2014, made $1.6 million.

I bet Weird News Andy would make a pun about “piece of mind.” A patient sues Norton Cancer Institute (KY), claiming that a surgeon extracted tissue from his brain for an experimental cancer treatment but then lost it.