I’m way behind on my writing, mostly due to the overwhelming nature of the exhibit hall coupled with entirely too many social events. I had decided to walk to McCormick Place Monday morning but abandoned my quest after the first half mile due to the drizzle. I was joined on the bus by two women who joked about the window curtains, saying that if they were rock stars they’d close them and kick back. If they were rock stars they’d have couches and tables rather than the flimsy cup holder that turned my bottle of Diet Coke into an ankle-seeking missile.

They joined me in rolling our eyes at the people on the bus who jumped up and rushed the front as soon as the bus stopped. I’m not sure what happened to waiting until those in front of you exit, but that wasn’t the only bus ride where that happened. I had been trying to time my arrival to the opening of the exhibit hall, but was early since I decided to catch the shuttle at the Hilton. I picked up some breakfast and was nibbling a sandwich and juggling my stuff. I want to offer a profound thank you to the gentleman who gave me his chair and proved that manners still exist. 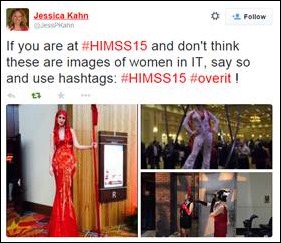 Shortly after that, I saw a tweet from Jessica Kahn that highlighted images of women at HIMSS with the hashtag #overit. Sex definitely still sells, as proved by a vendor event I attended that featured scantily-clad Go-Go dancers. I did overhear several attendees comment that they thought there were fewer “booth babes” than in previous years. The wildest thing I remember seeing was in 2011 when one vendor had contortionists on stage in their booth. As a clinician, it was fascinating, but still not appropriate.

I did make it to a couple of sessions, but none of them had anything earth shattering. Monday’s agenda was aggressive and included hitting several booths before making my way to play Quipstar at the Medicomp Systems booth. The amount of work that goes into putting together a full-scale working game show set is huge. Their backstage area hosts a variety of technology that keeps the game up and running. I’m not sure how many trucks it takes to haul it, but the infrastructure of their two-story booth is pretty impressive.

My performance as a contestant, however, was not impressive. Despite winning the double-points bonus question, I finished second and will be taking home six gallons of popcorn, which I’m sure my staff will enjoy. The real prize was their donation of $1,000 to Wings of Hope. Nominated for the 2011 Nobel Peace Prize, they set up field bases in developing nations. The bases help build clinics and schools, and establish air ambulance service for rural areas. As a non-sectarian, non-political organization, they can often work in areas that will not accept other charities. They also operate a Medical Relief and Air Transport Program in the US that flies children for medical treatment free of charge. 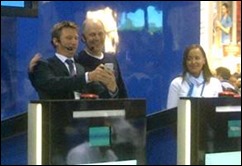 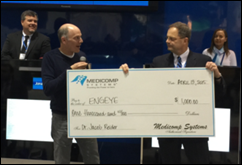 I returned to Quipstar later in the day to escort Jonathan Bush to the booth. He played for the St. Boniface Haiti Foundation against former ONC Deputy National Coordinator Jacob Reider. St. Boniface Haiti Foundation helps bring healthcare, education, and community development to the people of Haiti. The highlight of the round was seeing them take a selfie together. The contest was also full of entries for my “things I thought I’d never hear at HIMSS” list, but they were throwing them out too fast for me to jot them all down. Dr. Reider won the round, earning $300 cash which he added to the Medicomp donation to Engeye, which is dedicated to improving health and education in Uganda.

Later I stopped by the Dell booth to put together some cute headbands for Brooke’s Blossoms. They will go to pediatric cancer patients. We always like hearing about HIMSS events that benefit others, so if you have pictures or write-ups, feel free to share them. I wanted to hit several other booths, but was struggling mightily with the floor plan, mostly due to confusing booth numbering and crazily staggered aisles. 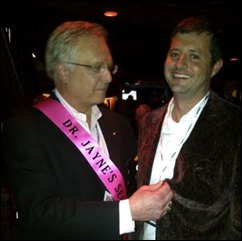 I left the exhibit hall early to get ready for HIStalkapalooza and was glad that I did since the bus ride to my hotel involved nearly 45 minutes of bumper-to-bumper traffic. Luckily the taxi to the House of Blues was much quicker. I had the opportunity to chat with my Secret Crush, David Dieterich, who was admiring my escort’s crushed velvet jacket. Although my crush initially bought my cover story, I’m pretty sure he figured out my secret identity. 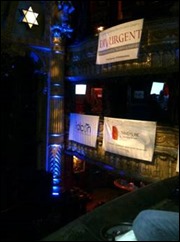 The third floor at the House of Blues was the place to be for dinner, with minimal buffet and bar lines. I snagged a front row seat to enjoy the music while having dinner with a couple of friends. Although I couldn’t experience the sponsor opera boxes because I didn’t have a wristband, they looked cool. After dinner, it was time to grab some pecan pie and head to the dance floor for the HISsies.

As an avid baker, I enjoyed Judy Faulkner’s comments about liking to bake pies. She said she was reluctant to put the pie in Jonathan Bush’s face because it would be an insult to the pie. BTW, apple is her favorite. Once the HISsies were over and the pie was abused, Party on the Moon took the stage. They were even better than I remembered and I hope we can make them a permanent fixture. I overheard several hysterical comments throughout the night, including one attendee’s remark that the lead singer looked like the love child of Farzad Mostashari and Usher.

I admired many footwear choices, lamenting the fact that I just can’t do stilettos anymore. I wish I could have gotten a better picture of the red boots above — they were phenomenal. If the owner sees this, please send me a picture and description for my wish list. I could probably tolerate those for a couple of hours. Since I listened to my Shoe Advisor’s pronouncement that “wedges win every time,” I was able to stay on the dance floor until the bitter end, then hit two after-parties before collapsing at The Palmer House. 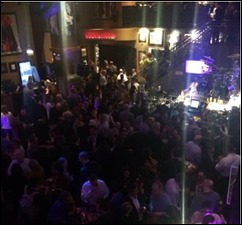 A reader shared a pic of the Athena Cloud Party, describing it as “insane.” I’m wondering if Jonathan Bush had any comments to make about HIStalkapalooza? I know there were plenty of other events Monday night – send your best pics and a description and I’ll run them next week.