Cerner completes its $1.3 billion acquisition of Siemens Health Services as announced in August. Cerner reiterated in the announcement that it will continue to support Siemens core systems for an unspecified period, with Soarian maintenance guaranteed for 10 years. Former SHS CEO John Glaser has joined Cerner as SVP and a member of the company’s executive cabinet. Julie Wilson, Cerner’s chief people officer, says Monday was “the biggest single hiring day in Cerner history” as its employee count jumped from 16,000 to 22,000 with the acquisition. CERN shares rose 0.57 percent Monday on the news, giving them a slightly better performance (blue, up 20 percent) than the Nasdaq as a whole (red, up 17 percent) over the past year.

From Lemmy: “Re: Athenahealth’s purchase of BIDMC’s WebOMR. Not sure why Athenahealth would be interested – WebOMR is a complete piece of crap being held together with gum.” I mentioned the acquisition in last weekend’s post as a rumor provided by reader InTheKnow, although I left out specific details since ATHN is publicly traded. More discussion follows below – I got details from John Halamka that go well beyond the announcement and invalidate some incorrect assumptions I had.

From Mr. Smith: “Re: national patient identifier. HHS and ONC are prohibited by law from even discussing anything related to an NPI even though they are acutely aware of the challenges posed by not having one. The legislative branch should address the issue, but HHS and ONC are trying to create a workable solution.” 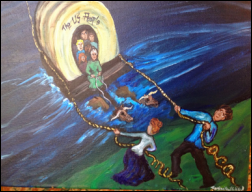 We’ve received just a handful of requests from real-life patients who want to take advantage of our HIMSS15 conference scholarship ($1,000 in travel cash plus registration). We’re accepting applications through February 9 and will choose the five based on their patient stories and their writing ability. See Regina’s description and send entries to Lorre.


Athenahealth makes its second recent  push into the inpatient EHR market by acquiring the WebOMR system that was developed by Beth Israel Deaconess Medical Center (MA). Terms were not disclosed. The company will integrate WebOMR with its AthenaNet system. The internal announcement from BIDMC CEO Kevin Tabb says that BIDMC will do a “trial implementation” of “some of athena’s current products” in “select areas of our network.” BIDMC’s only obligation to Athenahealth is to help its engineers understand how WebOMR works “so they can try to expand its use beyond our walls” as “the days of self-built information systems will not last forever.” Athenahealth acquired small-hospital EHR vendor RazorInsights on January 14. Athena shares ended the day up just over 1 percent, the same daily gain as the Nasdaq composite.

I spoke to BIDMC CIO John Halamka, MD for clarification about the agreement: 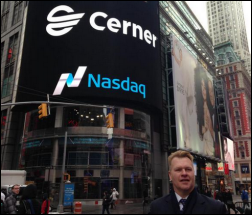 Voalte lays off 25 percent of its staff, or around 40 employees, in a reorganization.

Canada-based consulting and services vendor Accreon is acquired in a leveraged buyout funded by its management team, its founders, and Mansa Capital. As part of the deal, the company gives up its 49 percent ownership in Velante, which ran a controversial e-heath project in New Brunswick, and turns it over to the other partner, the New Brunswick Medical Society. 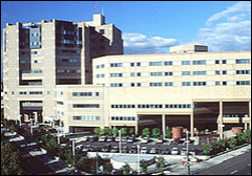 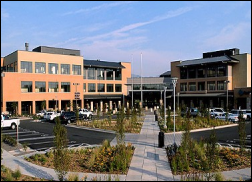 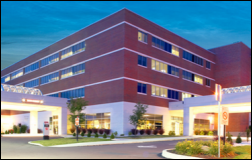 Murray Reicher, MD is named CEO of DR Systems, which he co-founded in 1992. He replaces co-founder Rick Porritt, who has retired. 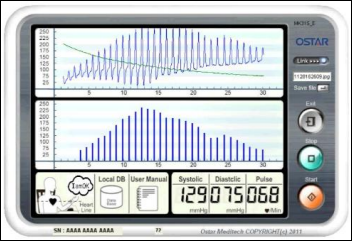 Mediware announces CareTend, which combines its home care solutions into a single platform. 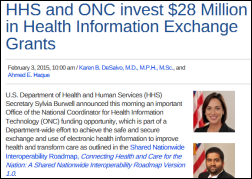 HHS Secretary Sylvia Burwell announces a $28 million ONC-funded HIE grant program, described as, “Grantees will address interoperability workflow challenges, technical issues, and improve the meaningful use of clinical data from external sources. Providers will be engaged from across the entire care continuum, including those who are not eligible for the Medicare and Medicaid EHR Incentive Programs such as long term care facilities, to be able to send, receive, find, and use health information both within and outside their care delivery systems.”

ONC requests $92 million for its FY2016 budget, up from $60 million. ONC wants $5 million to establish a Health IT Safety Center that will go live in FY2016.

This is a great quote from former National Coordinator David Blumenthal, MD, tweeted by ONC annual meeting attendee @PharmDJD: “It is cognitive dissonance to want cutthroat competitive markets but to expect healthcare players to share valuable data.” It would be great if hospitals, retail stores, quick lube stations, and hair salons shared customer information freely for the benefit of their shared customers, but only healthcare providers are being (unsuccessfully) shamed into doing so. 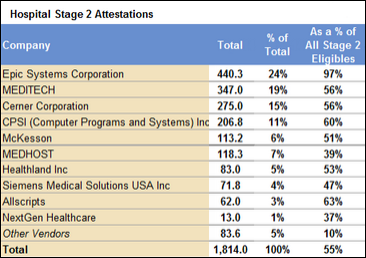 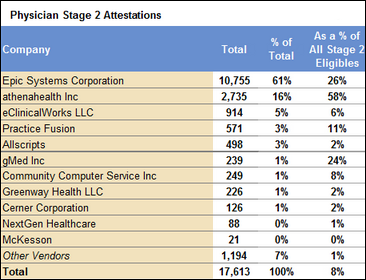 Health IT equities researcher Jamie Stockton of Wells Fargo Securities provides a slice and dice of CMS’s Meaningful Use Stage 2 data. Hospital attesters included 97 percent of eligible Epic users, 63 percent of Allscripts, and 60 percent of CPSI, with everybody else falling under that number (Medhost and NextGen trailed the pack at under 40 percent). Physician Stage 2 rates were predictably abysmal, with Athenahealth out front at 58 percent and Epic at 26 percent, but vendors such as Allscripts, Greenway, Cerner, NextGen, and McKesson (the latter at 0 percent) having less than 5 percent of users attesting. Obviously it’s dangerous to read too much into the vendor vs. the customer, especially given the mass EP Stage 2 bailout. 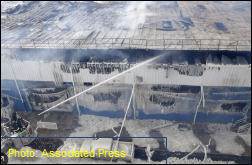 Paper records from several New York City hospitals are lost when a Brooklyn document warehouse is destroyed in a seven-alarm fire that scattered charred patient charts over several blocks. Cleanup crews attempted to retrieve partially burned papers that contained patient clinical and financial information. New York City Health and Hospitals Corporation is among the organizations that stored documents in the warehouse, but says that as early EHR adopter, it expects no operational impact.

The creator of PGP encryption software (now owned by Symantec) says the Sony Pictures breach highlights the need for companies to redirect efforts from security to privacy by encrypting emails and documents and retaining less information online. “If you look at all the things that have been developed – firewalls, intrusion detection systems, all these things put in place to protect computers? They haven’t really hit a home run: they keep getting breached. But if you look at the Snowden material, the one thing that does seem to do well is strong encryption. Of all the things you see getting broken into, it’s conspicuously absent from that list … In the 90s, if you were using strong encryption, you’d have to defend yourself and justify what you were doing: ‘What, are you a terrorist or a drug dealer?’ Now, if you aren’t using strong encryption, you have to justify it. You’re a doctor? What do you mean you’re not encrypting your patient records? Or you left your company laptop in a taxi with 2,000 customer names on it? You better hope that data is encrypted or you’re in trouble.”

Researchers at Penn State College of Medicine suggest 10 situations where it would be acceptable for doctors to Google a patient, boiled down to (a) if they suspect the patient is lying to them about their history; (b) if the patient could be a doctor-shopping drug user; and (c) if the patient seems to have the capacity to harm themselves. 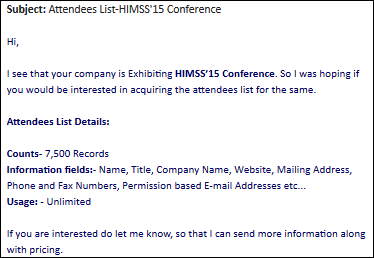 I received the email above from a well-known B2B spammer who apparently got an email list of HIMSS15 exhibitors and is offering to sell a database of full attendee details. The fraud clues are numerous: (a) the email purporting to be from “Tracy Nixon” was clearly not written by a native English speaker; (b) the company’s website is just a placeholder full of “lorem ipsum” text; (c) the domain owner’s name is blocked in its registration records; and (d) clearly a 7,500-record HIMSS conference attendee database is at best incomplete given the 40,000 or so attendees. The same company has scammed companies in other industries by selling them junk lists at high prices and then refusing to give refunds. 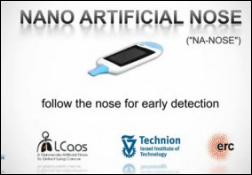 Weird News Andy titles this story “Heaven Scent” and adds that the device should be worth the cost of at least 1,000 Fitbits. A smartphone-powered cancer detection system called the SniffPhone detects the odor of lung cancer on the breath with 90 percent accuracy