The follow-up exam confirmed the base camp physician’s initial diagnosis. My eyes welled as the valley echoed with a familiar roar of the medevac chopper engines making the treacherous flight to reach the high ridge.

We had barely arrived at Base Camp Plaza Argentina, a mere 4,200-meter elevation, when the fickle finger of HAPE touched my lungs. I had to abandon my bid for Aconcagua well short of the summit. The fact that I’d summited peaks higher than this base camp did not matter.

Six years ago, I’d started climbing, and since then, I’d summited 20-plus peaks. I realized mountains ago that the true prize was never in conquering the actual summit. If I really listened and reflected, each climb embodied a much deeper lesson. An epiphany. I wrote about this a few times. Kilimanjaro, Rainier and, most recently, Elbrus.

Where I’d always connected these lessons to my success in summiting, I was now perplexed by Aconcagua.

Our team had formed and stormed for a couple of days in Mendoza, Argentina. The age range spanned 30 years. Germans, Scottish, Brazilians, and North Americans. Singles, one couple, friends, and in my case, climbing partners composed this diverse team. All were surprisingly equal in abilities, well prepared, fast, and strong. And of course we had talented guides who took us places our passports could not.

Once on the trail, we traveled 8-10 miles each day. We climbed 2-3,000 feet elevations before making camp each night. One day, we even outpaced the mule team carrying half our gear. We reached Plaza Argentina swiftly and efficiently. 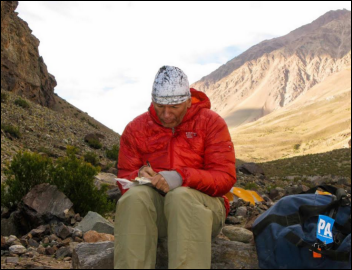 We set our tents on the Plaza and all of us dealt with typical altitude issues. The few hours before dinner, we rested. As I laid my head on my makeshift pillow, I heard gurgling noises when I exhaled. My experiences and training said this was a telltale sign of things not good. Our lead guide Zeb did a pulse ox. Dropping under 90 was reason for concern—I was 65! My heart rate was 80 (my normal resting heart rate is 42). Obviously, it would go up in altitude, but this was twice the norm and my breathing was already labored. I suffered a major headache and my BP was out of range.

Given my climbing résumé, we tried to fix things with drugs to accelerate acclimation. Nothing worked. My oxygen saturation stayed dangerously low. HAPE had won.

If you’ve never experienced High Altitude Pulmonary Edema, taste this. The night before my medevac chopper ride, the physical misery was indescribably frightening. Water invaded my lungs as if to drown me alive. The lack of O2 getting into my veins rendered me lethargic; every step stole my breath. I had zero energy.

After I got the final diagnosis that morning, I had to tell the team that the incoming chopper had come for me. I approached our mess tent where my companions were eating and I started bawling. I stopped and took deep, labored breaths to compose myself. I said 10 words and my emotions overwhelmed me again. I touched my heart, eyed each of them, and then left to be alone.

Frank (Tucson Medical Center CIO) helped me gather my belongings. He and I were tight, having shared many tents in the past. He’s like a brother. He provided comfort. I took what I needed to get by for the day. My bags would come down by mule later that evening. 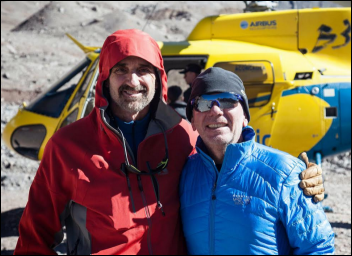 Frank and Zeb stood with me as I waited to load the bird. I don’t bawl often, but overwhelmed with sadness and inadequacy, I convulsed. Another climbing buddy Adriane came over. A sister, we also climbed together previously and enjoyed singing. A mother and teacher, she consoled me. One by one, my team came to the helipad. We shared hugs and tears. They stood there waving as I lifted off. On the bright side, they no longer had to groan at my puns or hear me sing.

Now I could hardly move.

Not to mention all the high-end equipment I purchased. I’d given talks about the 100 percent success rates for my previous climbing teams. My pride had been at stake.

What was beyond this summit?

The flight out was amazing. To gain altitude and overcome hellacious winds, the pilot did three loops in front of Aconcagua. The beauty left me awestruck. The rest of the ride through the Andes was a sight to behold. I made the most of the experience. Chin up. God was teaching me something. Listening to Him taught me what was beyond this summit.

The chopper dropped me off at the staging area, where I waited for my belongings to arrive by mule. Most of my symptoms cleared quickly. Finally, bags in hand, I headed back to Mendoza and made the most of the next couple of days as a tourist.

What did I learn? Humility for sure. But I also took the time to actually hear God. He’d been speaking to me for a couple of years now, telling me to decelerate. Slow down in all areas of life. Pole-Pole (slow-slow) in Kilimanjaro climbing terminology.

I never listened, despite well-intentioned people telling me. Failure got my attention. I had to learn the difficult and expensive way because I’d clearly refused the easier route. So again, it was never about the mountain. It was about an epiphany beyond the summit. This time, very close and personal.

How about you? Do you have ears to hear and eyes to see the real story around your circumstances? What are the peaks and valleys in your life? It’s rarely obvious to the physical eye. You have to seek it with your heart, because your heart sees and hears what your other organs cannot. 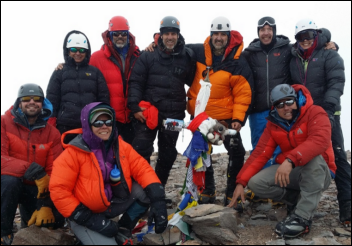 The best news: my team went on to summit that glorious peak on January 12, 2015. At their celebration dinner back in Mendoza, they left an empty chair to honor me.

Now for some Malbec.