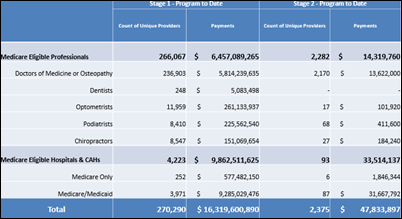 The HIT Policy Committee reports that 93 hospitals have been paid Meaningful Use Stage 2 payments through September vs. nearly 4,000 that earned Stage 1 money. EPs had 2,282 MUS2 attesters vs. 266,067 who earned Stage money. None of that matters much since attestation runs all the way through 2015 and there’s not a lot of reason for providers to jump on early, but critics will miss that point in calling MUS2 a failure early in the game. The total of the Meaningful Use money handed out so far exceeds $25 billion. 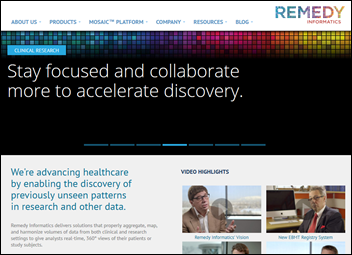 From Popinjay: “Re: Remedy Informatics. Has apparently shut down, according to customer QOPI.” Oncology quality assessment organization QOPI cancels its fall reporting round, saying it has no choice after technology provider Remedy Informatics “unexpectedly ceased all business operations on October 21.” The Salt Lake City-based company, which provide registry and research informatics products, hasn’t responded to my inquiry. I interviewed CEO Gary Kennedy several years ago and was impressed with the technology, but the company’s business model changed a couple of times since then.

From Remy C: “Re: [company name omitted]. The company, one of the larger former-Epic consulting firms, is losing faith from its partners after ‘spreading itself too thin.’ Two of its staffing partners are withdrawing from offering subcontracts after the company’s problematic attempt at adding go-live support.” I’ve removed the company names since the rumor is so vague that there’s no easy way to confirm it, but I’m more interested in the overall trajectory of Epic consulting firms anyway. Epic go-live support would seem to be a good business line as long as there’s enough of them to keep people working. 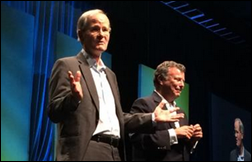 From Walkin’ Dude: “Re: Neal Patterson’s keynote speech at Cerner Health Conference Tuesday. He skewered Epic (without naming them) by saying that it’s immoral that they use their closed system for competitive advantage. He sais CommonWell will cover 50 percent (of patients? data? visits?) and that he’s reasonable sure Meditech will join and add another 25 percent of market share. He said that Epic, with 30 percent of the market share, is a data sharing black hole.” That’s Neal above on the right, sharing the CHC podium with John Glaser from Siemens Health Solutions, which will become part of Cerner early next year. Neal said GPS devices are an example of what can happen when proprietary standards are opened up.

November 5 (Wednesday) 1:00 ET. Keeping it Clean: How Data Profiling Leads to Trusted Data. Sponsored by Encore, A Quintiles Company. Presenters: Lori Yackanicz, administrator of clinical informatics, Lehigh Valley Health Network; Randy L. Thomas, associate partner of performance analytics, Encore, A Quintiles Company; Joy Ales, MHA, BSN, RN, senior consultant, Encore, A Quintiles Company. Data dictionaries, organizational standards, and pick lists for data entry fields may describe the intent of a particular data field, but don’t guarantee that the data captured in the source system actually reflects that intent. Data profiling is the statistical analysis and assessment of the data values in source systems for consistency, uniqueness, and logic to ensure that the data landing in a data warehouse or analytic application is as expected. Attendees will learn which projects benefit from data profiling and the resources needed to accomplish it.

November 18 (Tuesday) 1:00 ET. Cerner Takeover of Siemens, Are You Ready? Sponsored by HIStalk. Presenters: Frank L. Poggio, president and CEO, The Kelzon Group; Vince Ciotti, principal, HIS Professionals. The Cerner acquisition of Siemens impacts 1,000 hospitals that could be forced into a “take it or leave it” situation based on lessons learned from similar takeovers. This webinar will review the possible fate of each Siemens HIS product, the impact of the acquisition on ongoing R&D, available market alternatives, and steps Siemens clients should take to prepare. 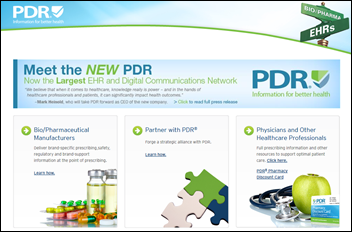 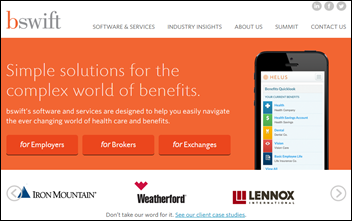 CPSI announces Q3 results: revenue up 14 percent, EPS $0.83 vs. $0.66, beating revenue estimates but missing on earnings. Above is the one-year share price chart of CPSI (blue, up 3.8 percent) vs. the Nasdaq (red, up 17.8 percent). President and CEO Boyd Douglas (above) said in the earnings call that 38 of the 200 hospitals that have attested for Meaningful Use Stage 2 are CPSI users, placing it behind only Epic. CFO David Dye, responding to an analyst’s question about CPSI’s KLAS scores, said, “Our KLAS scores have been hit or miss now for 25 years. We don’t have particularly good relationship there. But I’ll put our performance up against anybody else who’s been ahead of us over that time frame” and says the company’s churn rate is at an all-time low. Dye said in answering a question about CPSI’s CommonWell participation that it’s not opening up sales opportunities, but adds, “It’s probably a bit cheesy to say that we all did this out of the goodness of our hearts, but I think it’s closer to that. I think it’s going to help us with new business. I will say that we’ve got some competitors in our space that haven’t joined yet, and that we certainly aren’t afraid to mention that when we’re talking to the potential hospital clients. But to say that we expected and/or now expect that to benefit us competitively, I think would be a stretch … we didn’t think the government was ever going to do it.”

Release of information vendor Healthport, which entered into an agreement last week to be acquired by a New Mountain Capital investment found, announces its merger with competitor Supna Healthcare Solutions.

CVS Health reports Q3 results: revenue up 9.7 percent, adjusted EPS $1.15 vs. $1.06, beating expectations for both in a quarter in which it changed its name from CVS Caremark halted tobacco sales. 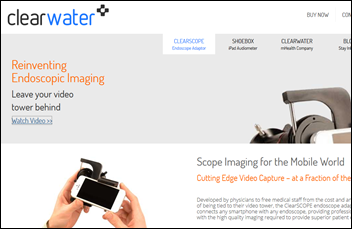 In Canada, Clearwater Clinical raises $2 million in funding. The company, founded by an ENT surgeon, offers Clearscope (smartphone video recording for endoscopy) and Shoebox (an iPad-powered hearing tester). Mayo, Hopkins, Mass General, and CHOP are among its listed clients. 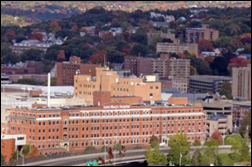 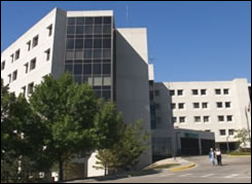 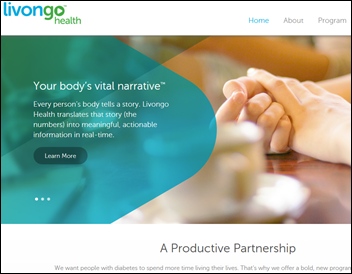 NextGen announces at its UGM a mobile version of its patient portal, native iPad EHR support, a population health management solution, a HISP Direct Secure Messaging connectivity offering, and a cloud-based version of its EHR/PM systems that will be released in 2015.

CHIME uses CMS’s new (and very early, like election returns an hour after the polls close) Meaningful Use Stage 2 numbers (17 percent of hospitals, 2 percent of EPs) to again urge the agency to reduce the 2015 reporting period from 365 days to 90 days. Parent organization HIMSS jumps with a melodramatic stretch in suggesting that raising the bar on taxpayer EHR handouts “hinders our nation’s ability to improve the quality, safety, cost-effectiveness, and access to care.”

An ONC-commissioned report finds that providers participating in accountable care models are hindered by lack of EHR interoperability, with more work also required on analytics and clinical decision support systems. 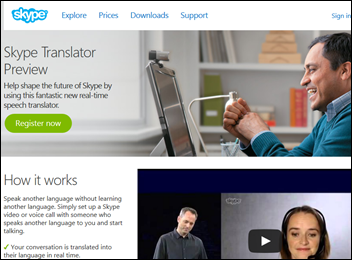 Microsoft opens the preview release of Skype Translator, which performs real-time speech translation between users. Translation is a big and expensive problem for hospitals, so it could be interesting. 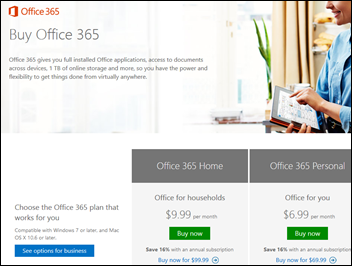 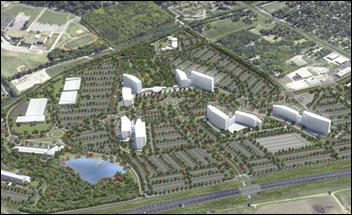 Cerner will break ground on its $4.45 billion Three Trails campus in south Kansas City on November 12.


Nudge launches Nudge Coach, which combines information from a person’s wearable devices into a single “Nudge Factor” number that doctors can quickly review. The company was formed by two 2010 Wofford College graduates who played semi-pro soccer together. 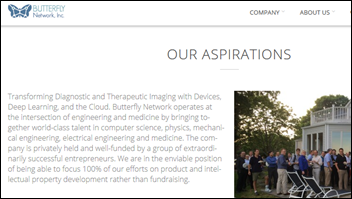 Butterfly Network raises $100 million to create an iPhone-sized ultrasound scanner that it says will be as cheap as a stethoscope.

A three-subject study finds that Google Glass creates blind spots in the eyes of users.


University of Colorado Health CMIO CT Lin, MD performs a non-model version of “House of the Rising Sun” for hospitals going live on Epic, recorded at UGM. He didn’t mention his ukulele when I interviewed him in April. 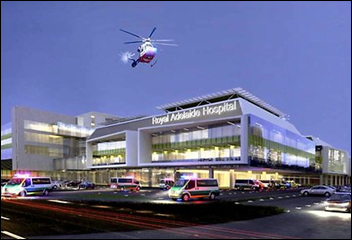 In Australia, the opposing political party says the April 2016 opening of New Royal Adelaide Hospital at risk unless the government fixes its Allscripts Sunrise patient management system, rollout of which was put on hold in July following billing and medication errors, physician complaints, and lack of funds due to higher than expected legacy system maintenance costs. South Australia Health hinted originally that it might sue Allscripts because of rollout delays, but now says it expects to resolve its issues with the company privately

The Wall Street Journal covers EHR vendors that are adding Ebola-specific functionality. It profiles Mass General, which is using a new application from its own EHR-searching spinoff QPID Health that matches patient symptoms and travel history to alert users of potential infection.

Novant Health (NC) will demote 150 medical secretaries to medical unit receptionists and cut their pay up to 10 percent following its EHR implementation that eliminated the position’s most complex task — order entry. The local paper notes that the timing could have been better given that executive retirement plan changes caused recent eye-opening lump sum payouts, such as the $8.2 million paid to CEO Carl Amato in 2013, of which $6.1 million was pension related.

A poorly written article in The Michigan Daily covers the student health service implementation by University of Michigan Health Systems of what it calls a “filing system” and then “MiChart,” not only misspelling MyChart but confusing the Epic patient portal with the provider-facing inpatient and ambulatory modules. The article says 50 percent of patients are using MyChart, but only 5 percent are using it to schedule appointments. 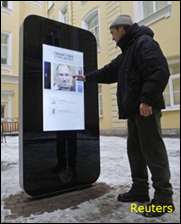 Odd: a six-foot, iPhone-shaped monument honoring Steve Jobs at a St. Petersburg, Russia university is taken down, with an executive explaining that the announcement by Apple CEO Tim Cook that he is gay violates Russian law as “a public call to sodomy.”