From Mcklayoffs: “Re: McKesson layoffs. There were huge ones in April. I heard it happen again on Thursday. I heard even some of the Paragon folks were let go from services. You have to wonder if that’s their go-forward solution.” Unverified. 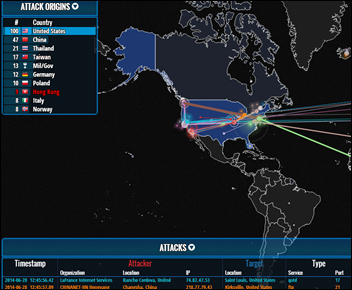 From Lt. Dan: “Re: cyberwarfare visualization. This real-time map of hacker attacks shows that the US is getting bombarded by pretty much everyone.” The extremely cool display from cybersecurity firm Norse, which looks like one of those 1960s US-Soviet World War III doomsday scenario illustrations, shows who’s being attacked and from where. Some of the information is surprising: at this moment, attacks are being launched from the domain of drug maker Merck in New Jersey as well as the University of Michigan and Cal Berkeley, quite a few attacks are originating from military domains, and the US is by far the most popular intended target with 10 times as many attacks as #2 Hong Kong.

Six percent of poll respondents said they participated in a video-based visit as a patient in the past year. New poll to your right: which EHR package should the DoD choose – Allscripts, Epic, or Cerner? Click the Comments link on the poll widget after voting to defend your decision –  you never know, maybe the DoD is looking for your insight.

Listening: Austin-based Ume, who I saw live awhile back. Singer/guitarist Lauren Larson shreds it on stage with monstrous distorted guitar licks, passionate vocals, and a head-pounding mane of blonde hair, but I met her after the show and she’s a tiny, sweet Texas cheerleader type who decided to take a break from working on her PhD to focus on music along with her bass-wielding husband Eric. Ume is on tour with Circa Survive, which will play in Riot Fest in Chicago in September with some of my favorite bands: Jane’s Addiction, The Cure, Weezer, Metric, Failure, Superchunk, Dandy Warhols, and Mastodon.

ONC’s Director of the Office of Consumer eHealth Lygeia Ricciardi announces on Twitter that she has resigned effective July 25.

ZirMed announces enhancements to its Analytics solution that include a customizable dashboard and drill-down interactive KPIs for key business metrics.

Cerner, not surprisingly, joins Epic and Allscripts in throwing its hat into the DoD’s EHR replacement ring. Cerner will bid along with partners Accenture and Leidos. Someone asked me on Twitter how I saw it playing out and I gave the odds at 80 percent Epic, 20 percent Cerner, and zero percent Allscripts. Epic has a big advantage in covering a huge chunk of the US population, having the only comparably sized implementation in Kaiser Permanente, winning just about every large-system bid, having implemented its system with the Coast Guard, having IBM as a partner, and having powerful members of Congress like Paul Ryan who have previously demonstrated willingness to use their clout to push Epic. Cerner’s advantages are the comfort level of being a large, publicly traded company with increasing healthcare reach outside of IT, strong government-savvy partners in Accenture and Leidos, good hosting experience, and a potential willingness to beat Epic on price in what will be the biggest deal in healthcare IT history. I don’t see Allscripts having a chance since large hospitals aren’t buying Sunrise, its biggest client North Shore-LIJ is keeping whatever enthusiasm it has quiet, its offerings are narrow compared to Epic and Cerner, and memories of its corporate stumbling  haven’t faded yet, but it does have the strongest set of partners in CSC and HP, the latter being important since the much-touted $11 billion bid value is a 10-year cost including maintenance and infrastructure where HP shines.


3M announces ePrivacy Filter, $50 software that uses webcam-powered facial recognition to limit screen viewing to the authorized user, warn them if someone is looking over their shoulder, and blur their screen when they step away.

Implementation of the C-CDA (Consolidated Clinical Document Architecture) semantic interoperability standard needs work, according to a JAMIA-published study by a group that found many errors in documents submitted from 21 systems. Meaningful Use Stage 2 requires using C-CDA, but the samples provided to the authors often included missing or incorrect information. The authors made four recommendations: (a) create a site with public C-CDA samples and scenarios since vendors say they don’t always know how to represent their data; (b) require EHR certification testing to include validating terminology such as SNOMED and RxNorm; (c) add a certification requirement that EHR vendors provide all of the data elements they capture instead of making many of them optional; and (d) electronically monitor the quality of real-world C-CDA documents being produced and report results. The authors conclude that further effort will determine whether C-CDA documents “can mature into efficient workhorses of interoperability.”

A study finds that patients discharged from hospitals that use an advanced EHR cost $731 less than those from non-EHR using hospitals. The methodology isn’t convincing: (a) the data is from 2009 and simply matched up a discharge database to what the article says is the HIMSS annual survey (which really means the HIMSS Analytics database);  (b) the “cost” figures were the nearly worthless cost-to-charge ratios that everybody uses because hospitals don’t track individual unit costs well; (c) the analysis seems to have looked only at overall cost rather than for comparable diagnoses or treatments, but I’m not clear on that from the methodology provided; (d) correlation isn’t causation, so any jumping to conclusions that plugging in an advanced EHR will reduce hospital costs is ridiculous. 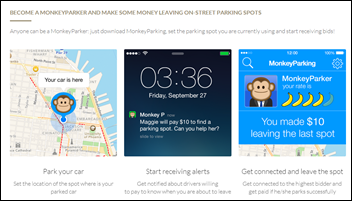 Here’s how disintermediated San Francisco cab drivers are competing with ride-sharing service Uber (valued at $18 billion): they’re using an app that lets people pay them for the public parking spots they intentionally occupy for that purpose. The city has ordered the app’s Italy-based developers to cease operations, saying its excuse of selling convenience rather than parking spots is “like a prostitute saying she’s not selling sex — she’s only selling information about her willingness to have sex with you.” The developer of a competing app is paying people $13 per hour to tie up high-demand evening spots in the Mission District and then resell them, give the company working inventory to promote its app.