The views and opinions expressed in this article are mine personally and are not necessarily representative of current or former employers. Objects in the mirror may be closer than they appear. MSRP excludes tax. Starting at price refers to the base model; a more expensive model may be shown. 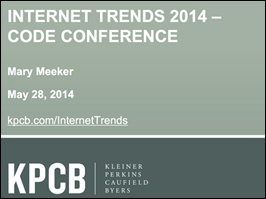 Each year Mary Meeker publishes a report describing Internet trends. I’m not sure I know the full history of the report, but she traditionally presents it in the spring at the AllThingsD conference (formerly run by WSJ) and now at the new version of the conference called <re/code>.

It is hard to imagine how much research and data must be collected to produce such a data-rich report. I have never seen her present it live, but I’m told she shares the whole thing in an action-packed 15-minute presentation.

The full report is available here. It is truly amazing and is one of my favorite things to read of its kind.

Since my world is healthcare IT, here are a few of my own opinions of how the larger trends described will have an impact. 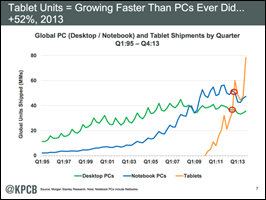 Tablets are growing at a faster rate than PCs and laptops ever did, with a growth rate of 52 percent. With only a 6 percent population penetration or 439 million global units, we will likely soon see tablets pass both desktops and laptops. I think this will translate to at least three things in the healthcare setting: (a) the mobile shift has another big wave coming; (b) like smartphones before tablets, the unit growth will be propelled by BYOD; and (c) users will expect to use multiple devices in one setting and be able to easily navigate between them. 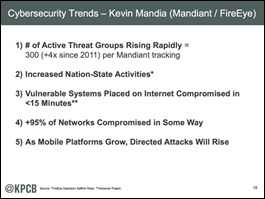 Cyber threats are intensifying along all dimensions. They occur more frequently, happen faster, and result in more serious implications. An exposed machine is likely to be compromised in 15 minutes or less. While healthcare has struggled to not lose information and has achieved a mostly failing grade, we are in for a major shock wave as new entrants begin to seek the data we have. 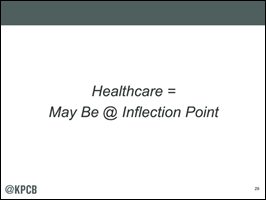 I hope healthcare is really at the inflection point predicted. The backdrop plays out as follows:

Some of the hottest spaces will be employer engagement, telemedicine, adherence tools, and chronic disease management platforms. 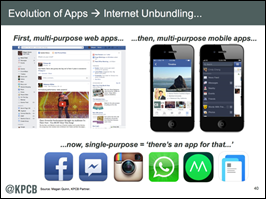 While our existing client-server and even our cloud-based healthcare applications will continue to struggle with interoperability (of workflow, not so much around data), everyone will get a new chance at building it right. The mobile platform will create an environment to have single purpose, best-of-breed apps working in a unified way in a dynamic user-initiated platform. 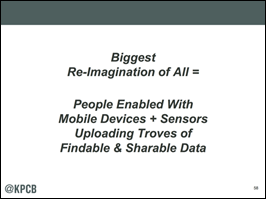 The term “big data” is overused, misused, and probably overhyped. But that is probably because it is still early and it is hard to get actionable results today. From a trend perspective, it could be the most exciting thing to watch in healthcare in the years ahead. It will pose complex challenges around transparency and privacy, but we should imagine a healthcare world that is filled with sensors producing troves of data that we can analyze and problem solve in real time. 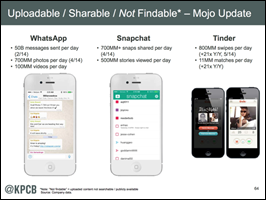 Privacy will drive new approaches to have data that is uploadable and shareable without being findable. This trend will probably help us get around complex privacy concerns in the short term by making the data single use. 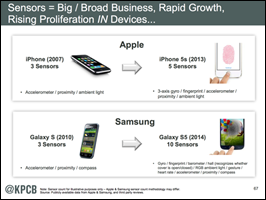 It won’t be just about what wellness or health sensors we have on our bodies or even in our bodies. Our smartphones will sense things for us. We might not need a fitness band if our phones can tell us the same thing. Samsung’s new device has 10 sensors. Apple’s new iPhone will likely match or surpass that. 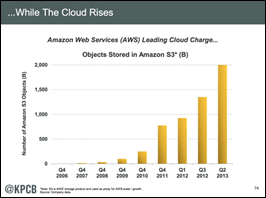 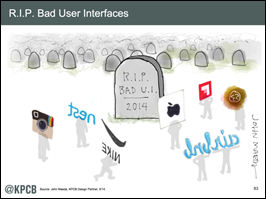 Beautiful new interfaces aided by data-generating consumers will not just be the new standard, but the only standard. As consumers and employees continue to use a host of well-designed apps in their daily lives, tolerance for poorly designed UI will plummet. As consumers continue to engage in managing their health information through provider-based portals, the EMR titans will either rapidly evolve their UI or be disrupted by those who can. 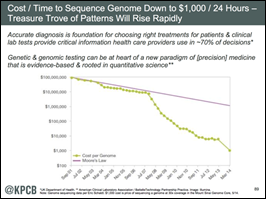 Precision medicine is on the way (period).

Mary Meeker’s whole report is 144 pages (with an additional 20 pages in the appendix – referenced as the slides she ran out of time to talk about). I recommend you give it a read.

Let’s not just find a better mousetrap. Let’s disrupt the whole idea. Mary’s report should challenge us all to re-imagine!

Darren Dworkin is chief information officer at Cedars-Sinai Health System in Los Angeles, CA. You can reach Darren on LinkedIn or follow him on Twitter.