Leadership and Identity—It’s All About the Title! (Part 3 of 4) 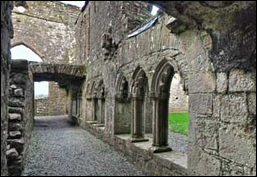 In our office lobby display case, the theme of the month was “pets.” David had a picture of his beautiful hunting dog, but what caught my eye was the castle ruin in the background. “Oh, that’s Bective Abbey, right across the street from my parents’ home in Meath. The remaining cloisters were used in scenes from ‘Braveheart.’” Jokingly I said, “Beautiful. Let’s go.”

Four weeks later, David and I were standing in the actual spot, walking the castle ruins. Although “Braveheart” was about Scotland, many of the movie shots took place in Ireland, in David’s backyard. To prepare ourselves, we watched the movie three or four times.

“Braveheart” is full of leadership lessons, but the following interchange between Robert the Bruce and William Wallace stuck with me. Here is the script and the video (3:30).

Robert the Bruce: “I’m not a coward. I want what you want, but we need the nobles.”
William Wallace: “We need them?”
Robert the Bruce: “Aye.”
William Wallace: “Nobles. Now tell me, what does that mean to be noble? Your title gives you claim to the throne of our country, but men don’t follow titles, they follow courage. Now our people know you. Noble, and common, they respect you. And if you would just lead them to freedom, they’d follow you. And so would I.” 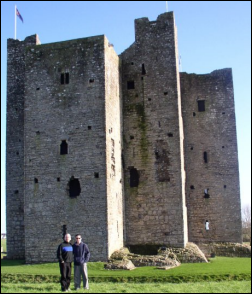 The same is true in life. Screw the title, focus on leadership. Title holds significance when it’s earned through performance.

Look at the 2013 Time Man of the Year, Pope Francis. Did Francis suddenly transform into the unique leader because he became Pope? No! If you know his history as a Cardinal and Arch Bishop, nothing he does as Pope should surprise you. Did he become Pope because he sought title? Oft called “the reluctant Pope” tells us that seeking title was not on his goal sheet. Serving people had always taken precedence. In fact, look at his warning against careerism.

I am not naïve to suggest this is always the case. We know plenty of people who gained titles by stepping on others, a Machiavellian winning-at-all-costs approach. But I can tell you the most successful leaders never sought titles, they sought to humbly serve. The former are easy to spot and get little respect.

One of my directors — I’ll call her Tracy — was a damn good analyst. She didn’t seek a title. She just pursued her role and responsibility with vigor. She accomplished great things and we gave her more. We saw the results and potential so we promoted her to a director. She is awesome.

In another instance, I was struggling to fill our chief security officer role. One day, I asked this recently retired Marine what his defining moment was. He described how, as a staff sergeant, he stood down a full bird colonel. You see, he cared about doing the right thing despite anyone’s title. That’s moxie. It’s leadership. I hired him on the spot. You think he will stand down from an executive or his manager if our security posture is compromised? Never! Title is secondary to effective leaders.

A good test: Do you ever use your title to get things done or get your way? I rarely refer to myself as senior vice president or CIO. When I am in meetings, I tell people I serve as a leader in leveraging technology to enable superior business and clinical outcomes. I do what I can to not to let title get to my head. Humility is the key. Watch for the slippery slope. It will take your title and life if you are not careful. I know.

Much of what I’m writing is logical and intuitive, but not often practiced. We are driven and ambitious and we seek instant gratification. We toiled well for a few months, so we think we deserve that next promotion. But I tell you the truth, gaining titles before you are prepared is very dangerous to both you and your organization. Stop the pursuit. Focus on being the best at whatever you do. The rest will follow.

Some of you are thinking, “Ed, I do all that. I don’t seek crowns. I seek to serve and the title never comes. In fact, I see others being promoted over me that offer half the value I do.”

I get it. It happens. The world is not fair. Continue to work your ass off and double down on your efforts. Find other ways to increase your value to the organization. Expand. Ask for more responsibilities. Volunteer. But if at some point, over multiple years, you’re doing all these things consistently and still nothing? Yep, time to bail.

Again, I’m a work in progress. Some of the things I write are aspirational for me. I struggle with the same things as you. Pride, arrogance, achievement orientation, instant gratification, etc. But I am slowly catching on to this identity thing. Taken me all of about 50 years. Hopefully it will stick for the next 50.

Damn, this is easy to write but hard to internalize, yet it is truth.

For me, identity is not rooted in title, looks, or what I do. It is who I am and what I stand for, believe in, and practice. I am trying hard to forge my identity in my faith in God. I like the sound of CEO, but His title is what I desire. “I am free. I am new. I am a saint. I am alive. I am all He says I am. I am His own.”

My detractors are right in the sense I fall short of the above list. However, only One’s opinion about me counts—and they’re not the One.

I will wrap up the Leadership and Identity series with, “Identity & Recognition” in my next post. I will specifically identify the keys to identity that resonates with who I am becoming.