I’ve been at the conference for two days and it still doesn’t have a clear identity in my mind. Others told me the same thing – it’s unfocused and hard to describe, much like “mHealth” itself.

The term “eHealth” was coined a few years ago and was quickly hijacked by companies and people who didn’t have much credibility in the non-eHealth world. Everybody else piled on to avoid being seen as passe’, turning eHealth into a frothy marketing term that meant whatever you wanted it to mean. It didn’t take long to shake out the 80 percent of that movement that was unsound and absorb the rest into the mainstream of healthcare IT. The term was retired because it was no longer necessary.

The concept of mHealth as a separate area of focus needs to be retired. It no longer means anything. It was born when so few healthcare people were using smartphones that it seemed like a geeky special interest that required intentional cultivation.

Since then, the mission has been accomplished. Mobile is a given. Nobody spends their lives perched in front of a desktop PC or even a “mobile” computer on wheels. You’re mobile if you use a connected smartphone, laptop, or tablet. That’s pretty much everybody, which means the mobile device itself as a common thread of interest is no longer compelling.

The mHealth Summit features topics that have little in common. Some themes might be:

The HIMSS conference has a lot of subject areas as well, but it’s so big and the content so deep that any attendee can create their own track and feel fulfilled. Most of them are hospital people, but those from other work settings (practices, research, technology, etc.) can find plenty to keep them busy and justify their employer’s cost to send them.

Not so at the mHealth Summit. Few people make “mHealth” their living, so most of what is being presented is irrelevant to any given individual. If you are interested in physician mobile access to enterprise systems, you aren’t likely to care about SMS health messaging in Africa or some cool gaming app for nutrition. The fact that they both run on smartphones is irrelevant.

Most of the people I saw at the conference seemed to be wandering around in a daze trying to figure out what they should be doing. I felt the same way. I spent time in the exhibit hall trying to find something that interested me and came up short for the most part. I couldn’t find many compelling educational sessions, especially after ruling out those that didn’t involve a vendor.

Health 2.0 offered a co-located afternoon track. Someone remarked to me that the mHealth Summit probably needed Health 2.0 more than the other way around. Both place heavy emphasis on startups, mostly those selling to consumers, sometimes for passionate health-related reasons but often because their people and products are too rough around the edges to sell into the conservative hospital and physician practice market.

Both conferences seem to highlight companies that are just as interested in selling themselves as their products. The mHealth Summit feels like a speed-dating event for questionable companies and wary investors, with all of us other attendees there trying to educate and entertain ourselves around the commerce-driven mating rituals. Maybe that’s what the mHealth Summit should morph into – a conference purely for startups and investors. They dominate the proceedings anyway and that would at least allow prospective attendees to plan accordingly.

I wonder how many of this year’s attendees are first-timers and where the returning attendees work. My speculation is that people from broad healthcare IT go once and don’t find a reason to come back, while the company and investment people dutifully return hoping to raise or invest money, find partners, and recruit staff. 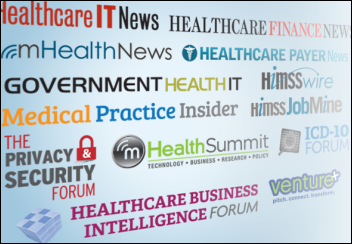 It’s interesting to me that the mHealth Summit is run by HIMSS Media, which probably explains the both heavy presence and promotion of its own advertiser-driven products and the appearance of vendors in nearly every aspect of the conference, including opening keynotes by company executives who were mostly pitching their companies. Even the wildly commercialized HIMSS conference doesn’t usually give company CEOs timeslots in the first morning’s session where attendees don’t have alternatives (both conferences, however, shut down the educational track for blocks of hours to herd attendees into the cash machine of the exhibit hall.) The pre-HIMSS mHealth Summit featured keynoters from the National Institutes of Health or heads of foreign governments rather than VPs from Qualcomm and AT&T. 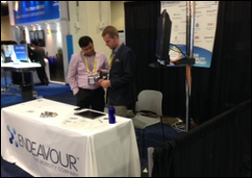 Lorre wants to thank our exhibit hall booth neighbors from Endeavour, who helped her hang our banner and took messages from booth visitors while she was away from the exhibit hall running the DocuSign webinar. On the other side of our booth, the Kore rep let her plug in her laptop to charge since she knows I would have vetoed $100 a day for a power strip. Across the aisle, Geoff from AT&T was really friendly and tracked down our expensive Freeman-provided chair that someone in another booth took because they hadn’t rented their own. We don’t know anything about exhibiting, so Lorre appreciated the support from folks who weren’t new to it. 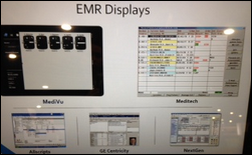 I took a look at MediVu, which offers a tablet-based EMR view that gives doctors the big picture of all their patients. It was pretty cool, although I bet interfacing to the EMR would be ugly. 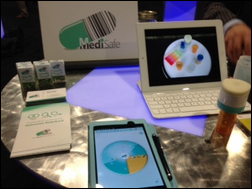 I saw a brief demo of MediSafe, a family-oriented medication adherence solution that lets you visually follow your own medication schedule or monitor the adherence of a loved one. They sell the software and partner with another company to provide the pill bottle sensors. 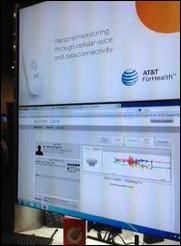 AT&T demoed some cool solutions in their ForHealth lineup. EverThere is a hands-free personal monitoring device that monitors a person’s activity with fall detection and connects to a call center. The real-time graph was pretty slick – it was easy to detect changes in movement pattern or a fall to a horizontal position.

I also looked at Toggle from AT&T, which allows enterprises to create a virtual desktop-type setup on a person’s individual mobile device to allow them to securely run enterprise apps in BYOD situation.  They’re offering a 30-day free trial, according to Lorre’s friend Geoff who gave me the demo. 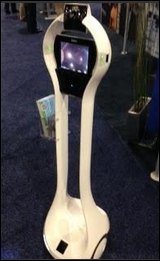 I saw the HIStalk booth and stopped by and introduced myself to Lorre. I thought she represented the site very well.

This is my first time at this conference. I came with a set of expectations that does not seem to align with what I’ve seen. In my view, a mobile health strategy for a provider should address all four quadrants found below (sorry for the rudimentary examples in each category).

Much of what’s been presented at the educational sessions and on the exhibit floor focuses on the Patient Health quadrant. A tiny bit addresses the physician component. (I thought that the Wired Magazine Health Conference in NYC a month or so ago did a better job, in a shorter, less expensive forum, providing a greater breadth of info – and much, much better food included in the price.)

I am surprised to see how few — relative to vendors or developers – hospitals and health systems seem to be represented here. When at HIMSS, I can barely move five feet without encountering someone I’ve worked with during the decades of my career. Here, I’ve found barely one. So it begs the question, what are providers doing about developing a mHealth strategy?

Some of the sessions I attended were completely mislabeled. As an example, a session called “Adopting mHealth Strategies to Remain Competitive” was nothing more than four independent vendors promoting their wares. (I notice that this conference does not ask for participant feedback on each session – probably a good thing).

The Executive Breakfast that I paid additional money to attend, entitled “The World is My Waiting Room” I thought would be chock full of discussion about patient outreach in a variety of ways, seemed like nothing more than friendly banter amongst the presenters. The “breakfast” was nothing more than croissants, yogurt, fruit and coffee – none of it remarkable. I left disappointed and hungry. I paid to attend tomorrow’s breakfast as well. I’ll eat before I go.

Weather apparently kept more than a few presenters away, so maybe this isn’t the right time of year for this forum.

All your comments about the venue and location itself I agree with.

So maybe I expected too much? Maybe this part if the industry is too new to provide what I’m looking for? I don’t know. What I do know is that in my new role in the health system into which we’ll be merging, I’m tasked with developing and implementing a Phase One mHealth strategy, and thus far, this conference isn’t giving me much to work with.

For whatever reason, the sessions I attended seemed more interesting than yesterday’s. In most cases providers, were interspersed with technology providers. A lot more real-life stories of how to deploy technology for the betterment of a certain patient population were told.

At the Executive Breakfast, Nasrin Dayani from AT&T for Health and David Levin from Cleveland Clinic brought real passion to the discussion about mHealth’s role in patient engagement. Still stumped as to why I had to pay to attend this session – which was full. This panel seemed just like all the others in content and message.

At today’s keynote, both Astrid Krag (Denmark) and Muhammad  Yunus (Bangladesh) did a great job speaking about how technology improves a population. Is it wrong to say I admire what I perceive as somewhat homogenously populated countries who seem to be able agree on an agenda to actually get things done? Eric Dishman’s personal story was effective too.

One of the two most significant sessions for me was “Aligning mHealth to Your Strategic IT Plan.” That’s just what I showed up to this conference to hear and I took away really useful info.

At “Streamlining Chronic Care: Keeping the Patient and the Bottom Line Healthy,” I’m not sure they effectively covered all of that, but all presenters were really good and spoke to actual experience in the mHealth space.

My other favorite session was “Lessons Learned from the mHealth Grand Tour.”  It showed what breaking down the walls of politics and connectivity can do to achieve something great for a specific population group, in this case, diabetics,  in mHealth.

Sometimes at these events, I’ll buy my lunch and look for random folks join at a table to start a conversation. I actually picked a great table and the conversation was flowing. It got even better when Kyle Samani sat down with is Google Glass.