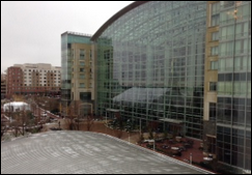 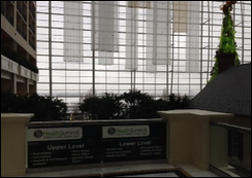 I’m at the mHealth Summit at the Gaylord National Resort and across the Potomac River from Washington, DC on the Maryland side. It’s a 2,000-room hotel surrounded by chain restaurants and stores in one of those destination developments aimed squarely at tourists who want to travel without being exposed to anything new, or heaven forbid, local (think Orlando on the Potomac. ) The weather has been terrible with snow and freezing rain, which has added to the feeling of captivity of being in a hotel intentionally located far from competing restaurants and stores and with no convenient shuttle service or Metro station access, meaning everything you eat or drink will cost twice what the market would otherwise command. It’s an expense account crowd, so they don’t seem to mind.

The last time I attended this conference was in 2010, when it was still being run by the Foundation for the National Institutes of Health and held in the Washington Convention Center. HIMSS took over in the meantime and attendance has more than doubled to around 5,000. Quibbles aside, HIMSS knows how to run conferences much better than the NIH, meaning there is good signage, an annoyingly peppy opening session featuring questionable curated pop music and lighting, and a strong vendor and commercial presence. It’s much more enjoyable.

I felt as though I had intruded on a geeky academic conference in 2010, although with Bill Gates, Ted Turner, and Aneesh Chopra speaking, the keynote star power was a lot higher then than now. Presentations back then were often about public health projects in Africa, government informatics research, and government policy. The “exhibit hall” was mostly just a part of the hallway where public health poster presentations were displayed, along with a modest presence by the telecom companies. I felt somewhere between virtuous and bored being there.

HIMSS, as it usually does, put all of that unsexy and unprofitable subject matter almost out of sight. Now the conference is a freewheeling ode to capitalism showcasing companies willing and able to pay big bucks for space in the exhibit hall and in the endless number of HIMSS-owned publications. The exhibit hall is like a downsized version of that at the HIMSS conference and most of the educational sessions are either about companies or feature vendor people as presenters or moderators. The attendee demographic seems to have shifted from a heavy non-US presence to the same kind of minimally diverse suited people who go to the HIMSS conference, except few of the folks here are from hospitals since we hospital rabble are seen as part of the problem, not of the solution.

HIMSS seems to be positioning the mHealth Summit as the minor league of its conference portfolio. Most of the small mHealth exhibitors will be toast in a couple of years, but those who survive will graduate to the big show, the HIMSS conference. It’s an untapped market for HIMSS since companies at this conference aren’t selling to hospitals and practices. It’s become more of an investment conference than anything else.

The same issues dominated this year as in 2010. Nobody’s really sure what mHealth is, basically punting off by saying anything that runs on a smart phone must be, which means the subject matter is entirely unfocused and confusing. Startup companies keep trying to convince each other that they can hang on long enough to be bought out. Everybody fervently believes that mobile apps and brash startup spirit can transform the US healthcare system into one that’s cheaper, more health-focused, and more consumer driven. It’s always easy for me to be cynical and dismissive, but especially so at the mHealth Summit.

Speaking of disruptive, I had firsthand experience with a business that truly is. Take a look at Uber, which is fairly new to DC and several other cities. Cab companies and the local governments that regulate and tax them are freaking out over Uber. You punch up on your smart phone that you need a run (either a limo-type service or  cab). Uber tells you how many minutes it will be until your car arrives, and you can watch it moving toward you in real time on a map. Your driver calls to confirm, takes you to your destination, and then you just walk away since Uber charges your credit card plus a 20 percent gratuity automatically. You don’t have to flag down a cab, figure out the whole payment forms/ tip / receipt issue, or explain on the phone where you need picked up. It’s pretty amazing, and clearly the deceptively simple app is connected to a super-sophisticated back-end system. I loved everything about it except the two cab problems that even it apparently can’t solve – my driver spoke no English and never heard of National Harbor so I had to punch it up on my phone and show him the screen so he could type it into his phone’s GPS. 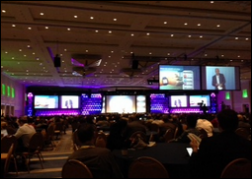 The opening keynotes I saw all involved vendors or investors. It almost made me miss the puzzlingly unrelated but occasionally interesting HIMSS conference speakers, like Dana Carvey or that mountain climber who sawed his own arm off. The Qualcomm guy proudly mentioned its venture arm’s new investment in Practice Fusion, which has zero to do with mHealth, but given that everybody wanted to talk about investments and valuations, maybe he was just caught up in the moment.

Investor Ester Dyson was interesting, although a bit prickly. She observed that cell phones didn’t compete with land lines, they just showed up and created their own market. She said that mHealth is like that, where it doesn’t have to compete with or earn the approval of entrenched companies. She also observed that mHealth has too many iffy apps and not enough real companies.

AOL founder Steve Case said mHealth needs to move from features to products to platforms. He gave an example in the early days of the PC, companies did nothing but sell printer drivers, but that didn’t last long. He says the market will open up in 5-10 years (the timeline apparently hasn’t changed much since the 2010 conference since that’s what they were saying then). Steve’s Revolution Health was a flop so he got rid of most of it and turned it into an investment vehicle that doesn’t seem to have kicked much of a dent in the universe either, so I don’t know if finding a rich, clueless buyer for AOL right before the dot-com bust makes him a sage, so take it for what its worth.

Dyson made an observation I heard a couple of brave skeptics utter at the 2010 conference. All of these cool apps haven’t had much impact on health. One company doubled the rate of smoking cessation, but that was still a jump from just 5 percent to 10 percent. In 2010 they were talking about the need for more outcomes research; apparently there still isn’t much of it. Case may have explained that in his talk – healthcare and education are the two sectors in which consumers have so little influence (and government has so much influence) that you can’t encroach on them via consumer pressure, you have to partner with the entrenched players. 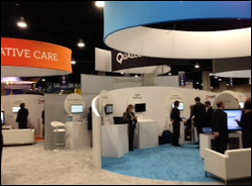 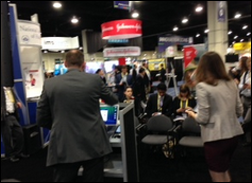 I floated around some sessions and the exhibit hall, not really seeing much that interested me. Apparently the Twitter crowd was more easily impressed since they were lighting up the Twittersphere with observations about both the educational sessions and the exhibits. The biggest and busiest booths were Qualcomm and the National Institutes of Health, which should illustrate my “unfocused” observation pretty well.

I went to a session on government mHealth policy and outcomes. Jodi Daniel of ONC said the FDA, HHS, and ONC are working on a draft strategy report related to the FDASIA report and the FDA’s potential role in regulating healthcare IT. She said the report will go out for public comment in early 2014. Credit ONC for always trying to get input from all stakeholders before just laying the law down. 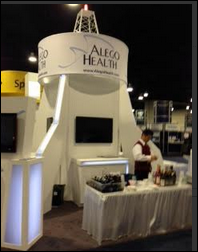 The exhibit I appreciated most was Alego Health, which not only had a bartender handing out wine and beer, they also had a nice cheese board that prevented me from having to pay $8 for a cold wrapped sandwich. I looked them up and they do EMR consulting, which doesn’t seem like a good fit for this conference, but I was glad to see them. 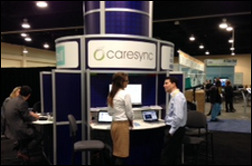 The exhibit hall had an Innovation Zone, where smaller, newer companies got a small demo space in a dedicated area in the back. 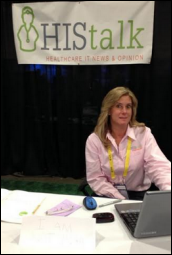 We had a little HIStalk booth (a freebie from the conference people as a media partner, meaning we write about the event, like right now) where Lorre said hi to anyone who dropped by. Enough people were convinced that Lorre is actually Inga and challenged her on it, so we made her a sign to put front and center assuring that she isn’t. She will be in the booth again tomorrow (#1305).

I’ve chosen some session for Tuesday that sound interesting. It’s fun to see a different side of healthcare and healthcare IT than I’m used to as a hospital person. If you’re at the conference, feel free to leave a comment with your takeaways so far. Let me know if you saw something amazing in the exhibit hall that I shouldn’t miss.