(Actual Unplugged posts indicated this blog have been renamed for the sake of humor.)

The wealthy York Pepperdine, president of the distinguished Pepperdine Software Corporation, had just finished attending his 30th high school reunion with his wife. Their former classmates embraced these high school sweethearts and offered the executive kudos for his success. Afterward, the couple enjoyed a drive through the town, dropping by their old hangouts and reminiscing their teen years.

Mr. Pepperdine asked his wife, “Did you talk to Gunter?”

“Do you mean Gunter Hockledorfer, the man I dated before I went out with you?” His wife’s Mona Lisa smile made him nervous. “We exchanged greetings. Why?”

“It’s sad that he didn’t do much with his life. He manages the gas station on Main Street.” Mr. Pepperdine winked at his wife, hoping his smugness didn’t show in his expression. “Just think, honey. If you had married Gunter you’d be a gas station manager’s wife today.”

She patted his leg. “Trust me, dear. If I had married Gunter, I would be Mrs. Hockledorfer, wife of the nation’s most successful gas corporation president.” 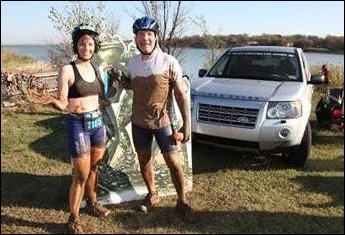 The above tale, though fictional, reflects the saying, Behind every successful man is a strong, or good, wife. (Feel free to switch around the genders to suit your scenario.)

If that adage is no longer politically correct, then how about this old proverb: He who finds a wife finds a good thing. Darn it, that’s still cliché and too traditional for “CIO Unplugged.”

Chill. You’ll get over it.

I’ve overheard people closest to Ed say, “Boy, it’s a good thing Edward Marx has Julie for a wife.” I laugh at this, not at the cliché implication within the wording, but because I know what it takes to keep things running behind the scenes in the Marx household—a sense of humor.

What really goes on behind the scenes, you ask?

Climbing mountains, running races, Ironman, Tango, speaking at every healthcare function between New York and LA … Does Ed ever slow down? Not really. Part of that is because God wired him to be a virile force within his circle of influence. The other part is Ed simply over-pushing the envelope and forgetting his Margins. Purposeful and radical trying to co-exist.

Where do those interesting and provocative blog messages come from? Disrupt the Heck Out of Your Workplace or Kill the Devil’s Advocate. Does he live that way at home, too? Yes. Life is never boring or stale.

What about the posts he regrets writing: Multitasking—Killing 50 Tasks in One Hour on the Treadmill? To which I said, Bad idea, honey. And that led to the post: I Take That Back. This all comes with the learning process. Few people, like Ed, aggressively seek to learn and grow, and growth requires making mistakes.

With the exception of the two-piece suit, Ed Marx is genuinely the same in private as he is in public. Ninety-eight percent of the blogs he writes spring from what he’s currently dealing with at work. “CIO Unplugged” is his method of working through his issues. A therapy of sorts.

Here are survival tips from how this executive’s wife manages behind the scenes:

I’m not sure what motivated Ed to ask me to write this post—except that perhaps he’s behind on all his blogs at the moment. Do I consider myself his sole secret to success? No, it’s a team effort. His admin, his 600-person department, his boss, mentors, direct reports, and—whether or not you realize it—you the readers help make up that team. So I thank all of you, including the adversarial and accusatory readers. Possessing the solid identity mentioned above helps us clip the thorns while inhaling deeply of life’s roses.

Edward Marx’s wife writes suspense novels. Her hobbies are fitness and nutrition, which help her keep Ed healthy. You can find Julie and her traditionally-published books at http://online.jamarx.net/