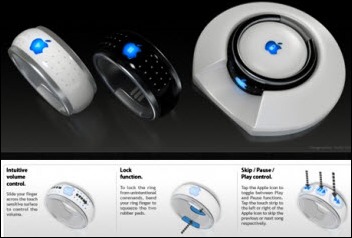 From The PACS Designer: “Re: iRing. As we wait for the Apple iTV later this year, it has been rumored that this new device will have an iRing as a control device. So while you munch your snacks and watch your favorite programs on an iTV, you’ll be able to flip channels, adjust the sound, or also switch to an Internet browser with this new innovation.“ 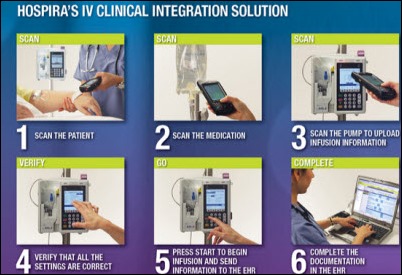 From Low Rider: “Re: barcoding. Saw this – looks pretty cool.“ A Hospira solution scans IV bags to verify them, scans the smart pump to check its settings, and then sends the settings and start time to the EHR. 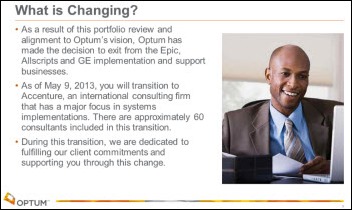 Internal slides from Optum sent by an anonymous reader suggest that the company will sell its 60-consultant OptumInsight implementation and support business to Accenture effective May 9.

Half of respondents think that the CommonWell members that offer hospital systems haven’t integrated their own products very well. New poll to your right: which of the listed hospital system vendors offer “open” systems, based on how you interpret that word’s meaning? You can choose one, several, or “none of the above” and you can leave a comment as well.

Welcome to new HIStalk Gold Sponsor Institute for Health Technology Transformation, or iHT2. The company offers events, research, Webinars, and resources, all described in its newsletter (sign up for a free subscription here.) Upcoming Health IT Summits are in Atlanta, Boston, Ford Lauderdale, Denver, Seattle, New York, Beverly Hills, and Austin. Speaker lineups are good enough that I may attend one myself. Research projects include healthcare analytics, big data, and process improvement. Their Webinar schedule is here. Thanks to iHT2 for supporting HIStalk. 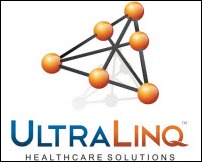 ED system downtime forced Memorial Hospital of South Bend (IN) to go on diversion for several hours on Thursday. 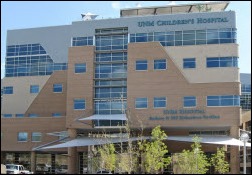 University of New Mexico Hospital (NM) will lay off 57 transcriptionists in outsourcing their work to Nuance. 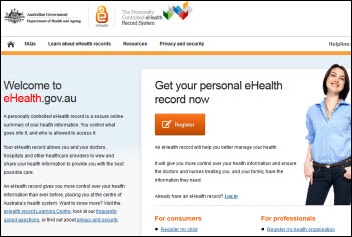 In Australia, the government’s $1 billion eHealth system holds only 414 patient records nine months after its launch, with fewer than 1 percent of doctors being able to view records on it because they refuse to sign up for a new healthcare ID. The government is sending out teams to recruit patients to sign up, which requires patients to provide their insurance cards and driver’s license. Critics say the government is trying to boost the registration numbers to hide the project’s failure.

In England, an NHS trust admits that it not only accidentally overpaid 791 workers, but also hired debt collectors to try to get the money back from its own employees. 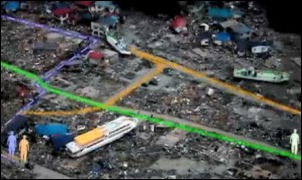 Google acquires Behavio, whose software harvests anonymous information from smart phone sensors such as location, speed, and the presence of nearby devices. Medical and disaster recovery applications are among its potential uses.

Weird News Andy suggests this weighty problem is waisting patients’ time. A survey finds that both patients and physicians trust the other less if they are overweight, with patients less likely to take advice from a fat doctor.

It’s more on the HIS-tory of Meditech this week from Vince.