From Strange Bedfellows: “Re: Allscripts acquisition of Jardogs. Healthland is now effectively partnered with Allscripts to provide its Stage 2 MU patient portal. Must be the era of friendlier inpatient HIS vendors.”

From GE Going Gone: “Re: GE. I am sure you have your hands full at HIMSS but I didn’t see this news reported in your roundup. GE sold its EMR business (GE Strategic Sourcing) to Gores Group. Gores Group is a private equity firm known for buying assets in need of turnaround at low prices; they specialize in corporate carveouts.” GE has sold its strategic sourcing operation, which sounds from the announcement like outsourced EMR and revenue cycle management services.

Here’s the Medicomp video of HIStalkapalooza. Everybody looks good. Not to be repetitive, but thanks to everyone involved, especially Dave Lareau and Medicomp for making it happen. I met Medicomp founder and MEDCIN engine inventor Peter Goltra the other day and I was like a teenager meeting Justin Bieber. 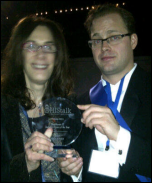 Thanks to Judy and Carl for dropping by HIStalkaplooza. Judy even graciously posed with her trophy (I’ll list all the awards when I get time). Also among the folks I saw there were Farzad Mostashari, former National Coordinator Rob Kolodner MD, someone I haven’t met but need to Regina Holliday, and many other industry luminaries and really nice people, especially those who either already knew me by sight or who I shyly introduced myself to during the event who made me feel less nervous. 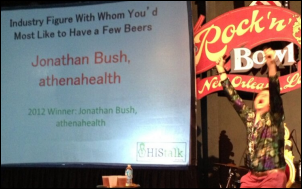 A nice moment captured by @Sphere3CEO. 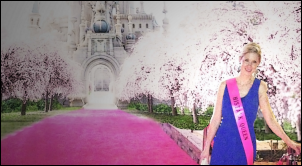 Our reigning HIStalk Queen Sarah Van Dyke outside her palace.

Here’s a video of the CommonWell announcement. Inga and I spent some time with Jonathan Bush on the show floor Monday afternoon and he said he was surprised that John Hammergren and Neal Patterson were pretty funny on the stage, at least for billionaires.

Congrats to Tim and Inga: Social analytics reveal @histalk as a favorite among hospital CIOs bit.ly/XUyjoO

Thanks to Rob Cronin at WCG, which performed a study of social media activity. HIStalk was the most popular healthcare IT source among health system CIOs, trailing only The New York Times and NPR. Very cool – thanks for doing this and for letting me know the result.

I was talking to a guy in the hall today who was in a Hampton Inn about 20 minutes out of town because it’s all he could get. He said the cab line was two hours long at 8:30 a.m. He jogged over to the adjoining highway and flagged down a cab, only to be chased by several line-waiters angry that he got a cab before them even though the cab wasn’t going to stop at the hotel anyway. It’s getting real Lord of the Flies out there.

In another example of New Orleans workforce motivation, nobody had bothered to remove the “do not drink” signs from the water fountains in the restroom even though the boil water alert had been lifted 24 hours previously.

No thanks to Allscripts, an HIStalk sponsor who took out two others today with their acquisition of dbMotion and Jardogs. Just kidding – acquisitions are a natural step as companies progress, as I’ve seen first hand by watching the remarkable number of sponsors who have been acquired, very often by other sponsors. We don’t lost many sponsors and acquisitions are by far the #1 reason. We enjoy the result of their accomplishments and like to think we had a tiny, tiny part in them.

Speaking of Allscripts, a Florida judge denies the company’s request to force a class action lawsuit brought against it by unhappy MyWay customers to arbitration, a ruling that allows the lawsuit to continue. The law firm representing the Florida medical practice that claims a forced switch from MyWay to the Allscripts Pro EHR will cost it a lot of money and that the company’s promise of Meaningful Use and ICD-10 capabilities were broken.

Epic says that despite the claims made by the co-opetition members of the CommonWell Health Alliance, nobody asked Epic to join the group that’s made up of the publicly traded companies losing business to the privately held Epic. Epic President Carl Dvorak says the group is attempting to make its members look like leaders instead of the followers they are and for that reason, he doubts Epic will join. 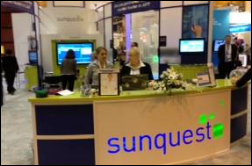 I’ll make a small confession: when we cruise the exhibit hall finding interesting things to write about, we like to check in with our sponsors, especially those who displaying the autographed HIStalk sign that we offer them for free (we really, truly appreciate that level of support – thank you). Sunquest is among those who put theirs front and center in Booth #911 (congratulations to whoever wisely snagged that easily remembered number). They’ve had some fine speakers in their booth, and if you’re interested in Meaningful Use for the lab, they’ll be presenting in Booth 149, Meaningful Use Kiosk 85, at 9:45 a.m. Wednesday. 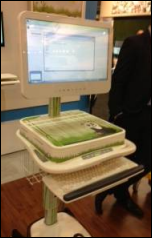 I’m like those Notre Dame football players that have to touch the overhead wall as they head out the tunnel onto the field – I can’t leave a HIMSS conference without caressing the cool carts from Enovate. This one sports a peds theme, but it still has the smooth, supple curves that I can’t keep my hands off of. 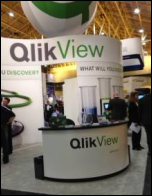 QlikView has a cool booth with a giant eye floating above it. Thanks for putting out the HIStalk sign. I’ve received a few raves from users of that product. They’re a new sponsor that I’ll talk more about later. 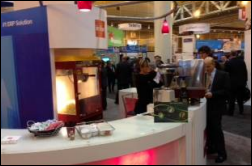 Good looking booth, Infor, and thanks for putting out your HIStalk sign. 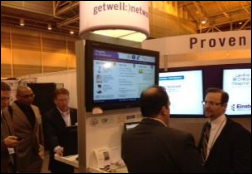 I got only an over-the-shoulder look at GetWellNetwork’s platform, but I liked what I saw. 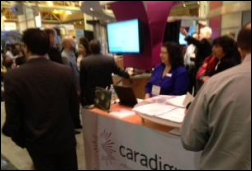 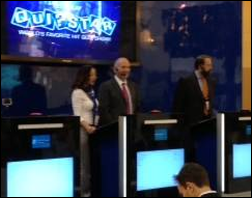 Our own CIO Unplugged Ed Marx played Medicomp’s Quipstar on the show floor to benefit his charity of choice. I wasn’t able to stay to see if he won, but he was looking good up there. I met Ed in person for the first time last night at HIStalkapalooza and he’s the real deal. 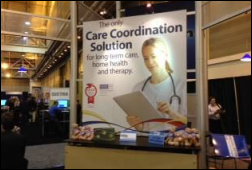 Thanks, HealthMEDX, for putting our sign front and center. We appreciate it. 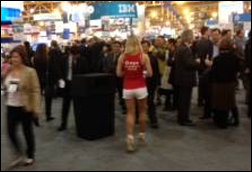 Do you suppose it was coincidence that this vendor person just happened to stroll down the main aisle wearing next to nothing? Do you care? 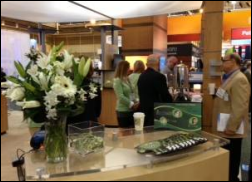 One of my favorite people to visit during the HIMSS conference is Mark Johnston of forms management software vendor Access. Once we’re finished talking healthcare IT, we move to a more serious topic: barbeque. Mark’s a on a prize-winning barbeque team, and every year we try to devise ways to work around policies prohibiting him from cranking out brisket and ribs from the smoker at or near the convention center. We branched out in a different direction today, discussing the variants of jambalaya, which his team also makes on the circuit. Green is my favorite color and his team’s shirts are a nice shade of it. 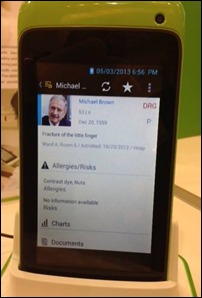 My third-favorite product of the day was the MioCARE Android-powered, semi-ruggedized tablet with a built-in 2D barcode reader. Not only was it very cool (bright green, highly ergonomic) it can run a wide range of apps using SAP’s EMR Unwired middleware (which I admit I know nothing about). They told me it costs $879, but given that you can wipe it down and drop it, it’s probably worth the difference for patient care use. 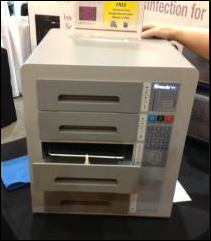 My second-favorite product of the day was ReadyDock’s tablet sterilizing system (it also charges and syncs). You’ll notice a hand on the device because everybody within arm’s reach was caressing it like an adorable child, including at one point when I was trying to slyly take a photo, THREE sets of hands, one of them belonging to a prospect and the other two attached to the loving company people. This bad boy will disinfect an iPad in 60 seconds. ReadyDock just released the CleanMe app (right) that reminds users to clean their iPad, includes a training video on cleaning, and keeps stats on the process.  I think this is brilliant.

My favorite product of the day, although I admit I saw only a 15-minute overview and demo, was BluePrint HealthCare IT’s Microsoft CRM-based Care Navigator tool that provides full visibility by both caregivers and family. It keeps all caregivers up to date with alerts, like “just registered in ED.” Users can do a lot of the patient management right from Outlook. I’ll take a second opinion if someone with more expertise than me wants to evaluate it.

Winner of the Most Fun Booth People is SynaptiCore, which does EHR implementation and support work. I heard their people hooting an hollering down the aisle and they are a ton of fun. They have a slot machine, beads, and a great sense of humor.