Experience is Not the Best Teacher 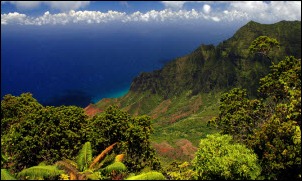 We took our youngest child Talitha on her first visit to Kauai so she could visit her grandparents. Yes, the same couple who offered me a bribe years earlier not to marry their daughter. They had retired in a condo, high overlooking the Na Pali coast.

One day while they babysat Talitha, we headed out for adventure with our eight-year-old son Brandon and German exchange student Sonja. We began our day intent on making it to Secret Falls, only accessible by foot.

We rented two kayaks, donned lifejackets, and started paddling up the Wailua River to the remote trailhead two klicks away. The evening before, a major storm passed through, so our outfitters warned us that the river would be more challenging than normal to navigate. 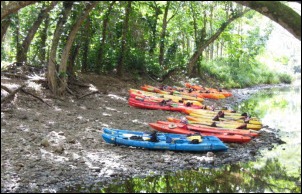 Julie and Sonja paddled smoothly and held a great line down the middle of the river. Brandon and I had a difficult time keeping the keel pointed upstream as we beached the banks. A mile in, we came to a choke point where the placid river channeled into a quarter of its normal width, creating a high velocity flow with rapids and eddies.

The women stopped short of the rushing waters and, of course we men would show them how to row into the straight, like salmon looking to spawn. Hal way in, I realized we had no chance. I tried to turn the kayak 180 and go back down in search of an alternate route.

The kayak flipped. I fell out, and the current sucked me 10 yards downstream into a recessed pool. The upside down kayak remained in the fray, tangled in branches and storm debris.

The women witnessed the event and moved in as close as they could where the waters were manageable. No one could see Brandon, and we were afraid he’d been swept under and caught in debris. A muffled “Help!” reached our ears. Trapped under the kayak, he could not escape because his life jacket was keeping him afloat in the air pocket.

Julie’s mother-bear instincts kicked in. She jumped into the water and swam to the kayak. 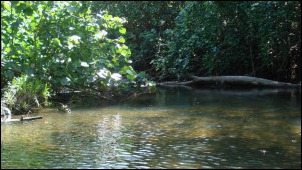 Grabbing smooth but slippery tree roots along the bank, I pulled myself to the other end of the vessel. Between the two of us, we were able to flip the craft. Brandon floated into the calm pool to safety. We decided the best course of action would be to carry our kayaks on land past the channel and then get back in.

While we collected ourselves, a man and his son rowed past us. They had observed the scene and congratulated us on our remarkable recovery. They then proceeded past us thinking they could muscle their way through the current. Sure enough, at the midpoint, the father turned the kayak to head back. As if a bad rerun, they also flipped, and the kayak got stuck in the same spot.

The dad stayed upstream, holding onto branches. His son was nowhere in sight. No muffled cries for help. He had seat belted himself in. So not only was he under the kayak, but upside down submerged.

I jumped back in and made way to the kayak. We could not flip it given the physics with his son as anchor. Reaching under, I pulled at every strap I could find to break the boy free. Likely seconds but seemingly minutes, he was freed. We eventually got him to shore, shaken but alive.

Julie and I talked afterwards and wondered why on earth our fellow paddlers made the decision to copy our near tragedy. After observing our experience, why would they even want to follow our path? Sure, had we been successful it would have made sense. But we nearly lost our son.

Experience is not always the best teacher. Had this father taken note of my journey, he would have spared his son fear and trouble.

So it is in work. Why do we insist on replicating other leader’s and organization’s failures? Why don’t we take advantage of other’s experiences, both the good and the bad? Is it pride? Is it a feeling of invincibility? Arrogance? Fear?

The next time you embark on a journey, make efforts to prepare in advance. Use two parts planning to one part execution. Research leading practices. Study accounts of success and failures related to your endeavor.

I learned this from one of my mentors. Before embarking on our EHR journey, he insisted we contact successful and unsuccessful organizations and learn. I arranged several CEO/CIO meetings with peer health systems where we actively learned from others experiences. It paid off and is now part of my standard way of operating. There’s no reason to risk drowning when we have access to river guides.