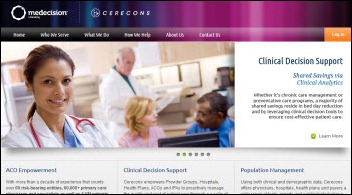 Medecision, which just announced plans to lay off 83 employees, acquires Cerecons, a provider of care coordination, population management, and quality outcomes and reporting applications for ACOs.

From Greenway Rep: “Re: iPractice Group. During the last few days, we did learn that iPractice Group, one of Greenway’s resellers, ceased operations effective last Friday, January 25. This reseller represents a very small percentage of our provider base. We look forward to continue working with these sites, which will have the option to either transition to another Greenway partner or choose to work directly with us for implementation and/or support services.” Greenway confirmed that iPractice Group has ceased operations, as reported by reader Nasty Parts this past weekend. The company claimed to have almost 1,000 provider clients, so the impact to Greenway remains to be seen. The CEO of the three-year-old iPractice blamed its closure on poor Q4 sales. The company moved into a new headquarters building in October 2012 that was more than triple the size of its former location, increased headcount by 800 percent to 70 employees since 2011, and acquired a competitor in 2011. Greg Bolan, who runs the healthcare equity research arm of brokerage firm Stern Agee, credited HIStalk with the initial rumor in an investor flash note, also expressing concern about the impact on Greenway’s sales. Greenway was among the ten biggest percentage decliners on the NYSE Tuesday, with shares dropping 7.7 percent.

From Tom: “Re: [inpatient vendor name omitted]. Is laying off 75 percent of its staff. All IT staff gone, most implementation and some development staff gone.” Unverified, so I’ve left the vendor’s name off for now. Usually someone leaves a comment saying, “Yep, that’s my company and it’s true,” so we’ll see.

From Mrs. Te’o: “Re:  Joe Schmitt, previous CIO of Steward Health Care. Will be named new CIO of Brigham and Women’s.” Unverified, but the forwarded second-hand e-mail insists that’s the case.

From CIO Tracker: “Re: Barry Blumenfeld, MD, MS. Leaving as SVP/CIO of MaineHealth less than 60 days after bringing Epic live at the main hospital. The planned rollout to seven member hospitals is being pushed back while the main hospital consumes all resources. The CIO is a casualty of exceptionally wide scope without commensurate resources.” CIO Tracker provided a genuine-looking memo purporting to be Barry’s notice to staff that he’s leaving as of January 30, but I’ve heard that he actually left early. They’re looking for an interim CIO, rumors say.

From The Amish Avenger: “Re: GE/IDX. I want to pare back its use for scheduling and registration and use the EMR instead. I keep hearing that GE/IDX isn’t selling well and has had job cutbacks. What can I expect to see? Fewer code updates? Less support?” I’ll step aside and let readers chime in. 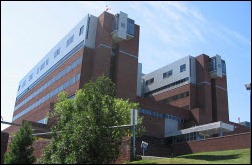 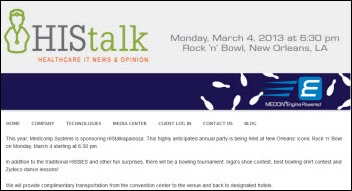 The window for expressing interest in attending HIStalkapalooza is closing. Sign up now if you’re interested in a March 4 evening of food, drink, HISsies, bowling, and Zydeco music.

Welcome to new HIStalk Platinum Sponsor Dearborn Advisors, LLC. The Chicago-area professional services firm, founded in 2001, is a trusted advisor to clients who need help with clinical systems strategy, adoption, and deployment. Its services fall into three groups: strategy and value, clinical, and engagement and project management. All of those help clients maximize the return on investment of their clinical systems. The company’s consultants are experts in Allscripts, Cerner, Epic, GE, McKesson, Meditech, and NextGen, while the company maintains a close working relationship with Epic and Meditech. I’m impressed by the quality of their blog posts, such as this one on medication management. You surely know some of their executive team members if you’ve been around the industry for a while: Rick Mager, Jay Toole, Sally Akers, Bruce Bowers, John Brill, and quite a few more highly experienced people, with a significant number of them clinicians. Thanks to Dearborn Advisors for supporting HIStalk. 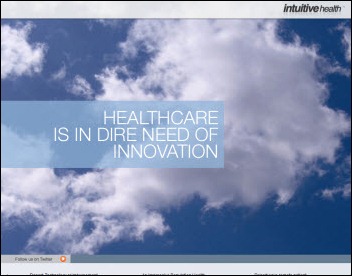 Intuitive Health, which offers a platform that connects providers with at-home patients and their personal health devices, raises $3.8 million.

Roper Industries announces Q4 results: revenue up 10 percent, EPS $1.44 vs. $1.23, beating expectations on earnings while falling short on revenue. Chairman, President, and CEO Brian Jellison said the integration of Sunquest, which the company acquired this past summer, is on track, with Sunquest being a strong performer with high single-digit growth. The company’s CFO did note in explaining a tax rate adjustment, “Sunquest as a US-based company generates most of their earnings in the United States, which is the highest tax rate in the world.”

Lexmark announces Q4 results: revenue down nine percent, EPS $0.10 vs. $0.94. Its Perceptive Software unit was the bright spot, reporting revenue that increased by 40 percent over 2011. 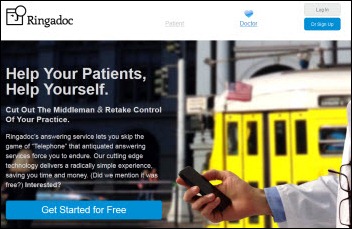 Startup Ringadoc, which offers after-hours triaging of physician calls for $50 per month with no contract, raises $1.2 million in seed funding. I believe that’s a reflector thingy in its logo.

Philips announces that it will exit the consumer audio and video business to focus on home appliances and healthcare.

Margo Hendrickson, athenahealth VP of human resources, responded to our query about the company’s announced plans to lay off 36 employees of its Birmingham, AL office on March 6. That office is the site of the former care coordination platform vendor Proxsys that athenahealth acquired in July 2011:

“As a high growth company, we are always looking to apply efficiencies to the way we work. While it is incredibly difficult to let people go from what otherwise is a growing employee base, our intent and commitment to shareholders is to align investment with business growth opportunities. This focused set of employee restructuring will allow us to achieve several critical business scaling and financial objectives that otherwise we would struggle to meet. At athenahealth, we are committed to ongoing team growth; in the past year alone the Company has grown its US employee base 28 percent, adding a total of 473 new employees to its US total of 2,140.” 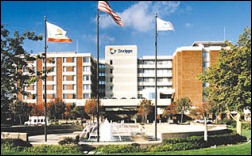 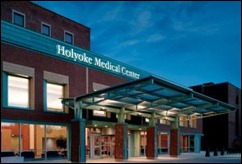 Holyoke Medical Center (MA) expands its relationship with eClinicalWorks to include the eCW Care Coordination Medical Record for advancing ACO and PCMH objectives. 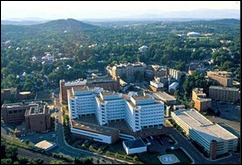 Randy Gaboriault, VP/CIO of Christiana Care Health System (DE), is named by Computerworld as a 2013 Premier 100 IT Leader.

CPSI announces the formation of TruBridge, LLC, a wholly-owned subsidiary that will provide business services, consulting services, and managed IT services to rural and community healthcare organizations.

TriZetto announces that BCBS of Tennessee is using its benefits solution to offer value-based insurance benefits to members.

The operator of the leading cord blood bank settles FTC charges that it lacked policies and procedures to protect patient information in a 2010 breach involving unencrypted computer equipment stolen from an employee’s car containing the information of 298,000 patients. The company avoided a financial penalties by agreeing to improve IT security and to conduct a security audit every other year.

This patent troll story doesn’t involve healthcare, but it provides a good lesson. A fake company set up by a lawyer who bought some old patents and created a business based entirely on suing big companies for infringing on its claimed patent on online shopping carts finally gets its butt kicked, courtesy of online retailer Newegg. The company had shaken down big online retailers, demanding a percentage of annual revenues. Victoria’s Secret and Avon had already been ordered to pay $18 million and one percent of their annual online revenue, while Amazon had paid the patent troll an amazing $40 million. Newegg, which has vowed that it will never settle with a patent troll, successfully had the company’s patents invalidated on appeal. You have to admire Lee Cheng, Newegg’s chief legal officer (above):

”We basically took a look at this situation and said, ‘This is bullshit.’ We saw that if we paid off this patent holder, we’d have to pay off every patent holder this same amount. This is the first case we took all the way to trial. And now, nobody has to pay Soverain jack squat for these patents … Just think about the dynamic if you’re a juror … Everyone wants to go home. It’s not their money. Defense oriented jurors are more likely to compromise and say, ‘Maybe we’ll just split the baby. Maybe we’ll just give them $2.5 million and call it a day.’ … We’re competing with other economies that are not burdened with this type of litigation. China doesn’t have this, South Korea doesn’t have this, Europe doesn’t have this. Just in our experience, we’ve been hit by companies that claim to own the drop-down menu, or a search box, or Web navigation. In fact, I think there’s at least four that claim to ‘own’ some part of a search box … Then they pop up and say, ‘Hello, surprise! Give us your money or we will shut you down!’ Screw them. Seriously, screw them. You can quote me on that.”

Guam Memorial Hospital says a software bug introduced by its vendor NTT Data caused it to underbill drugs by $1.9 million since May 2012. It found the problem as part of a financial improvement initiative and says NTT Data has confirmed and fixed the bug.

Zoll Medical says it’s the first defibrillator vendor to promise that it will share patient data from its devices, providing tools that allow other vendors to share the information it collects for patient care, such as in emergency medicine.

A small town in Australia loses its Internet connectivity for the third or fourth time in a month, with some of the previous outages having lasted days. Merchants can’t charge credit cards, but the medical clinic brings up more pressing problems: “We receive all our pathology results, specialist letters and discharge summaries through the Internet. If a patient comes to us needing treatment after they have just been discharged from hospital and we don’t know what they need or what they’ve had done, that’s a real problem.”

HIT incubator Rock Health rolls out a single online employment and internship form for applying to work at any of its 49 portfolio companies.