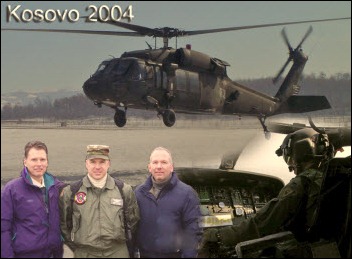 Unlike Hillary Clinton’s infamous visit circa 1996, I landed in Kosovo under relative calm. We flew in an unmarked military aircraft that was appointed more as a corporate jet than government transport. Despite the sight of armed soldiers, we had no fear of danger.

Coming off the plane, we were greeted by a chiseled young Army sergeant named Jeff Masters. “Welcome to Kosovo, ma’am/sir,” which he punctuated with a crisp salute.

A month prior, I had received a call from the Army. I feared the worst. My deputy CIO Mike had voluntarily been activated to Kosovo as part of an aviation mission. To my great relief, he was fine.

So why the call? Christmas was approaching, and the Army asked me to join generals, politicians, and business leaders on a trip to encourage the troops stationed in Kosovo. I had resigned my officer commission five years earlier, and the opportunity to spend time with troops again was a special honor.

Our roles had reversed. My deputy was now in charge. He took me out in a “don’t ask for permission” lights-out, fly-by-terrain excursion in his Blackhawk. What a rush. Mike pushed the flight envelopes trying to make me sick. Surprisingly, I did not pay a deposit to my barf bag. If I had, I would’ve never lived that one down.

Sgt. Masters, the soldier who initially greeted us, was assigned as our escort to make sure we got from point A to point B without getting lost or killed. He went out of his way to make sure our party was comfortable, answered all questions, and pointed us to the mess hall and latrine. He was polished and confident, and his passion for service was evident. In fact, that first evening, we observed an award ceremony where Sgt. Masters was decorated for superior performance. Generals sang his praises. I knew instantly I wanted this man to work with me when he left the service. 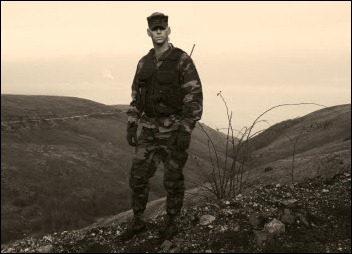 Sgt. Masters, a combat medic, had no technical experience. Before active duty, he was a carpenter’s apprentice. I didn’t care, because this man possessed what couldn’t be taught: a passion for service and superior leadership. Like anyone else, he could learn IT.

My convictions grew stronger as the week progressed. Once discharged from active duty, Jeff Masters brought his talent to my IT division.

I’m not big on resumes or the typical prerequisites. In the struggle to land my first “professional” job, I kept hearing recruiters cite my lack of experience or targeted education. Although I knew I could do the job, I could never break through. I was equipped with a Master’s degree and modest experience, but moreover, a passion to move mountains. A huge chore list growing up and having to pay my own way through college had built in me a hearty work ethic.

I had the goods for success, yet I could not get my foot in the door. I was frustrated.

When I did enter the workforce, I found little correlation between experience and education and actual performance. Ideally, you seek a high performer with requisite degrees and experience. But by no means is a robust resume a guarantor of success. I owe my career acceleration to leaders who embraced the talent philosophy. Each took what traditional managers would perceive as great risk and offered me opportunities for which I did not “qualify.” I’m forever grateful to my connectors, Mary, Mike, and Kevin.

My journey brought clarity and success to my own recruiting and hiring decisions. Time taught me that the key to good hiring is spotting talent — the natural reoccurring behaviors and thought patterns of a champion. I’ll take talent over years of service or education any day.

Nine months after Kosovo, we assigned Jeff Masters to manage a challenging project that was disorganized and poorly led. A year later, the project successfully wrapped and yielded promised benefits. Working closely with our technical division, Jeff learned field engineering skills and took a leadership role. Next, he joined the application team and learned CPOE. He brought enthusiasm and organization to the team. He was then selected as the IT manager for coordinating the technology of a new hospital construction effort. The hospital opened on time and on budget and is serving its community today.

What a joy it is so see Jeff flourish, leveraging all his talents and continuously learning new skills. I have every expectation that this apprentice carpenter / combat medic will continue to hone his skills and achieve great things for those whom he serves. He has since begun work on his Master’s. But that’s just window dressing for someone who’s already a talented and highly competent professional.

Footnote: on our way home from Kosovo, we stopped in Ireland to refuel. We waited in the gate area when another plane pulled in. The soldiers who disembarked were the first rotation of troops returning from Iraq. Realizing the situation, all of the generals, politicians, and leaders formed a “troop line” to welcome the soldiers for a job well done. This marked one of my proudest moments as an American. There was not a dry eye.