@Erblove Our apologies for the inconvenience today. The downtime should be resolved at this point.

Cerner had an apparently significant disruption of its remote hosting service on Monday, leading to extended downtime for clients all over the country (and possibly outside of the country as well, according to some reports.) Information is hard to come by, so feel free to leave your comments if your organization was affected. Would you do anything differently next time in terms of preparation or downtime procedure? 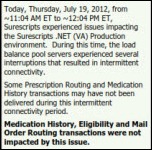 From Mr. Allscripts: “Re: Surescripts outage. I have more info.” Mr. A included a document suggesting that the Surescripts network had connectivity problems over about an hour last Thursday, during which time prescription routing and medication history transactions may have failed.

Thank you Cerner for being down all day. Just how I like to start my week…with the computer system crashing for all of NorCal

@histalk we have not charted any pts today. Not acceptable from a health care leader.

From Kaplan: “Re: Cerner. Remote hosting is down – it’s all over Twitter.” Apparently true, but I got just one reply to my Twitter inquiry of affected users for more information. Judging from the timing of some of the tweets, it looks like it was down for at least four hours. You can imagine the disruption of having your entire hospital go offline at once without warning, but at least it’s someone else’s problem as the IT folks sit and wait along with their users. I’d want an explanation, of course, and hopefully those affected were smart enough to have put a downtime penalty clause in their agreements.

From Mister X: “Re: Cerner downtime. Communication was an issue during the downtime as Cerner’s support sites was down as well. Cerner unable to give an ETA on when systems would be back up. Some sites were given word of possible times, but other sites were left in the dark with no direction. Some sites only knew they were back up when staff started logging back into systems. Issue appears to have something to do with DNS entries being deleted across RHO network  and possible Active Directory corruption. Outage was across all North America clients as well as some international clients.” I’ve lived through a lot of downtime it’s the same story as in this case. You don’t know when the systems will come back up until right before they do in most cases – 90% of the time required is diagnosis, not treatment. Users always want to know “how much longer” and you as the IT organization hate to tell them, “Beats me” even though that’s usually the case. Not to mention that when resources are stretched trying to get the problem fixed, there’s nobody sitting around to shoot the breeze with users wondering how it’s going (the user-to-geek ratio is about 1,000 to one, and you haven’t lived until you kill your pager battery within about 15 minutes with the constant pages demanding an individual briefing on what’s going on.)  And I can also say from experience that the worst problem isn’t server or power failure since those systems are backed up – it’s something like this, where Active Directory gets trashed, your name server dies, or you lose IP connectivity inside your data center. It takes forever to diagnose and fix.

From HERSS: “Re: mHealth Summit. I got an e-mail from HIMSS saying a certain company ‘will make their first appearance at the 2012 mHealth Summit as a Platinum sponsor and as such will have a significant role in the summit program and a key presence on the exhibit floor.’ I head to read twice to make sure this wasn’t from the basement sweatshop World Healthcare Congress sales reps and their over-the-top spamming. HIMSS has dropped to a new and very disturbing low. I would never have come out and said that a vendor will play a significant role in the program – that hardly inspires me to spend my hard-earned money for a conference pass. ‘A key presence on the exhibit hall floor’ means the vendor paid their prostitution dues to the pimp and are being properly rewarded for it.” Most of the HIMSS e-mails I get these days are just another form of vendor spam, pitching products, Webinars, or urging political action to interfere with the free market in healthcare IT. To be honest, I’ve twit filtered them into oblivion. When HIMSS speaks, it’s like a bad ventriloquist act – it’s easy to spot the arm up their backside. I really think they mean well and they have some honorable and dedicated people working there, but like a politician pandering to special interests, they lost their connection to the average provider once the dollar signs filled their eyes. 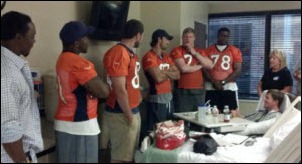 Nurses bragging on doctors, & doctors bragging on nurses. One doctor had no time to wait for an OR & began surgery in middle of the ER…

From Colorado Health Exec: “Re: Aurora shootings. While I was not involved, I want to extend my thanks to the healthcare professionals that did a great job in the early hours of Friday morning.  There were many heroes that day, from people in the theater, to the police, firefighters, and last but not least the nurses and doctors that treated the patients injured and consoled families trying to make sense of a senseless act. My thoughts and prayers go out to the victims and their families. Say what you want about the politics of healthcare these days, but professionals like these are the reason I am proud to be in healthcare.”  The above is from Denver Broncos tight end Jacob Tamme, who continues to tweet about being moved by his ongoing visits to Swedish Medical Center to visit with hospitalized survivors.

Welcome to new HIStalk Gold Sponsor CIC Advisory. Their tagline is “trusted informatics experts” and you probably really would trust them – the principals are Cynthia Davis, RN, FACHE (who’s been a CIO and has led several EHR/clinical transformation projects) and Marcy Stoots, MS, RN-BC (who has an interesting history of being an ICU nurse, wrote her master’s paper on data mining, is finishing a DNP in informatics, and led the EHR implementation at BayCare and other places). They’ve also just co-authored a HIMSS book called A Guide to EHR Adoption: Implementation Through Organizational Transformation. Testimonials are here. I was impressed that both ladies are members of the HIStalk Fan Club on LinkedIn, which always scores points with me. If you need help with EHR projects, informatics issues, Meaningful Use, business intelligence, or strategic planning, Cynthia and Marcy would be happy to speak to you. Thanks to CIC Advisory for supporting HIStalk.

It’s not quite as pervasive as squeezing “sort of” into every sentence, but what’s with everybody suddenly leading off a thought with the word “so” like they’re telling a story in a bar? You ask someone when they’ll finished a particular task and you get, “So we’re working on the documentation …” I’m also noticing that the young folks (who raise their inflection to a painfully high pitch at the end of every sentence as though they’re asking a question even when they aren’t) are also prone to sticking a confusing “no” in front of their “yeah” when excited. Example: “I just heard this great new band …” and they burst in with, “No – yeah, they were dope.” Curious.

I was thinking about the “deceased” flag in everybody’s EMR system after reading a story about a dead patient receiving an appointment in the mail in the UK. I assume that field populated only if the patient dies while admitted and someone keys in the discharge disposition. For research and population management purposes, it would be nice to know whether the patient is actually still alive, not just whether they went home that way last time from your own facility. If there was a national patient identifier, state and national death records could update everybody’s system. Seems pretty basic if we’re really going to try to account for patients between episodes. Or maybe somebody’s already doing this. Seems pretty basic: “Is this patient still alive?” “All I know is that he was the last time he came to the office.” Small-town doctors used to peruse the newspaper obituaries to send condolences and archive charts when appropriate.

The senior management team of Quality Systems (NextGen) sends shareholders a letter voicing their strong support for the QSI board nominees. This move follows actions by dissident director and board member Ahmed Hussein, who is attempting to gain control of the board by nominating his own director candidates. The letter urges shareholders to support the QSI board nominees at next month’s annual meeting.

The FTC grants early termination of the waiting period for the acquisition of M*Modal by One Equity Partners, clearing the way for the deal to close.

Philips reports Q2 numbers, with earnings beating expectations and healthcare leading the way with a 7% jump in sales.

Apple misses Q2 expectations, turning in its second quarterly miss in year and setting lower guidance for the next quarter. iPhone sales were way down, which could be attributed to the lack of the iPhone 5 rollout, a struggling world economy, or impatient users moving to hotter new phones like the Samsung Galaxy S3.

Providence Health & Services will deploy Nuance’s Dragon Medical 360 voice recognition technology across its 250 clinics and 27 hospitals, integrating it with Epic for the health system’s 8,000 clinicians.

The SE Michigan HIE announces that it has completed all milestones to provide its e-disability claim filing service to the Social Security Administration, which will accelerate the processing of disability claims from 457 days by paper to six hours electronically.

Military robot maker iRobot, worried about losing profits due to reduced military spending, decides the time is right to jump into the healthcare market with a new product in a partnership with InTouch Health. iRobot, which also makes the Roomba room vacuum cleaner, says the head of its new robot head is a moveable monitor that can be controlled, allowing the remote physician to look around the room. It comes with a stethoscope that it doesn’t know how to use, which makes it very doctor-like if you’re talking about psychiatrists, dermatologists, and physician executives who haven’t actually listened to anybody’s chest since residency, but who strut around in a white coat and draped stethoscope so they look more doctorly. 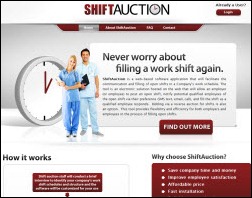 The chief administrative officer of Northwest Imaging (MT) develops a shift-budding app that he plans to complete and commercialize.

Cleveland Clinic and The Ohio State University announce a partnership to commercialize products that include medical software. 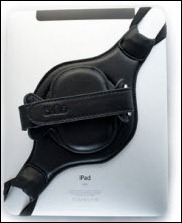 HELO announces its new TabletStrap PRO, a rotating leather hand strap for 10-inch tablets. Looks pretty cool for $60. Holding the iPad is awkward for me, especially when walking and poking at it, and this looks like it would be more comfortable and secure. 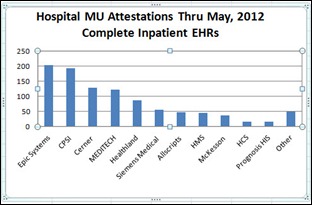 A reader last week asked if we were aware of updated MU attestation data by vendor. As it turns out, CMS published new information last week that includes details through the end of May. I used Excel to play with the numbers a bit, but a more robust reporting tool would probably be more efficient. EHRs by Epic, CPSI, Cerner, and Meditech were the most widely used products by attesting hospitals, which really isn’t much of a surprise. If you are interested in ambulatory EHRs, I created a similar chart on HIStalk Practice showing EP attestations by vendor, with Epic, Allscripts, and eClinicalWorks leading the pack.

Cerner partners with the city of Nevada, MO to focus on creating a culture of health in the community through education, incentives, infrastructure, and partnership with local employers and community organizations. Cerner will also deploy its CommunityWorks critical access clinical suite at Nevada Regional Medical Center.

AHRQ issues an RFI pertaining to quality measures enabled by healthcare IT. 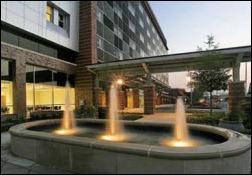