Shares of EHR vendor Greenway Medical Technologies rise 30% on its Thursday IPO, making GWAY the day’s biggest gainer on the New York Stock Exchange. Shares closed at $13, valuing the company at $358 million on revenue of $90 million. The company had revised its IPO price downward from $13 to $10 at the last minute, obviously leaving money on the table in hindsight. 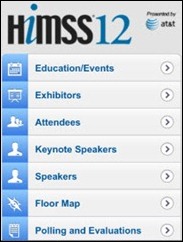 From Mr. Hospitality: “Re: HIMSS schedule. Do you know if there is a way to drop the HIMSS schedule into Outlook? Didn’t there used to be a way to do that?” I don’t use Outlook, but I couldn’t figure out an easy way to create a schedule in general from the HIMSS website. However, the HIMSS folks say an app is coming next week. I actually found it here, though it looks like it’s not quite complete since some sessions still lack specific details. The HIMSS12 Mobile Guide does allow you to select favorites and thus create a personalized schedule, though it’s not integrated with Outlook or other calendars.

From IT Guy: “Re: Reliance Software Systems. RelWare. the company that was developing the EMR for Henry Ford Health System, is no more. HFHS announced that it would implement Epic and sunset RelWare’s EXR product, leaving the company with no clients other than Ford. They have closed their doors and let their staff go.” Unverified. I e-mailed the company and received no response. Henry Ford went live less than a year ago on EXR.

From Randy Lugano: “Re: EMR character limit on assessments. Is this a common feature in popular EMRs?” A physician’s article in The New York Times in December bemoans her EMR’s 1,000-character limit as she tries to compose a usable assessment of a complicated patient.

I nip and tuck my descriptions of his diabetes, his hypertension, his aortic valve stenosis, trying to placate the demands of our nit-picky computer system. Nevertheless, I am still unable to fit a complete assessment into the box. In desperation, I call the help desk and voice my concerns. “Well, we can’t have the doctors rambling on forever,” the tech replies … Nobody, for example, leafs through a chart anymore, strolling back in time to see what has happened to the patient over many years. In the computer, all visits look the same from the outside, so it is impossible to tell which were thorough visits with extensive evaluation and which were only brief visits for medication refills. In practice, most doctors end up opening only the last two or three visits; everything before that is effectively consigned to the electronic dust heap. Most importantly, the electronic medical record affects how we think. The system encourages fragmented documentation, with different aspects of a patient’s condition secreted in unconnected fields, so it’s much harder to keep a global synthesis of the patient in mind. Now I’ve learned that file-size restrictions will limit the extent and depth of analysis. What will happen to the tradition of thorough clinical reasoning?

From CDMer: “Re: HIT testing. Another can of worms along the path of standardization.” NIST solicits bids for a Health Information Technology Testing Infrastructure that will “harmonize the efforts of healthcare standards test development and delivery to meet the demands for conformance and interoperability within the healthcare domain.”

From NYizMee: “Re: McKesson’s huge profits. I can’t understand how this company keeps making money. They do nearly everything so badly.” Healthcare has been very good to the company and its customers chose it willingly, so they must be doing something right.

From David Chou: “Re: Cleveland Clinic Abu Dhabi. Would love to share a Forbes piece on what we are doing.” David is the senior director of IT operations there. The 2.3 million square foot, 364-bed facility will open at the end of this year.

From Looking Out for the Little Man: “Re: CPSI. The little guy down in Mobile seems to be helping smaller hospitals meet MU, right behind Epic in the number of hospitals to attest.” The company’s fact sheet says 134 of its hospital clients have attested, giving it 22% of all attested hospitals, second only to Epic’s 164 hospitals. 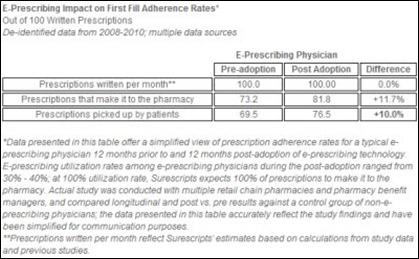 Here’s a few things you might already know if you are a faithful HIStalk Practice reader: first-fill medication adherence improves when physicians e-prescribe. Doctors still prefer desktop PCs over other devices for accessing patient data in the office or at home. Some common problems causing 5010 rejections. CareCloud CEO Albert Santalo gives the low-down on his company in our interview. Dr. Gregg shares the inside scoop on the startup Health Care DataWorks. If you haven’t been a faithful HIStalk Practice reader, it’s not too late to change your ways and see the light of the ambulatory HIT work. Thanks for stopping by.

Listening: reader-recommended Rodrigo y Gabriela, a duo of former itinerant street musicians who play amazing guitar that includes everything from classics to heavy metal (one YouTube commenter called it “thrash metal flamenco.”) Check out Gabriela using her acoustic guitar like a drum kit.

Staff scheduling systems vendor OnShift closes on $3 million in Series B financing led by a client of West Capital Advisors.

Trademark filings suggest that a possible name of the GE Healthcare-Microsoft joint venture is Caradigm. That trademark was held by Santa Barbara Regional Health Authority, but appears to have expired. 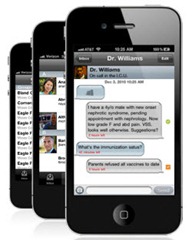 California startup TigerText, which offers HIPAA-compliant text messaging for hospitals, raises $8.2 million in a second round of funding. 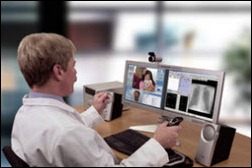 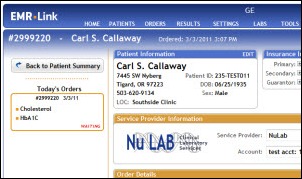 The Danish health system selects InterSystems to develop and support its national HIE.

Merge Healthcare signs 10 new Merge RIS customers, raising to 30 the number of radiology practices using it as a Complete EHR. 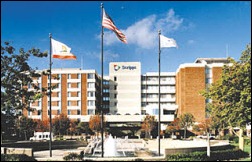 St. Mark’s Medical Center (TX) selects McKesson Horizon Medical Imaging for use with its Paragon HIS.

The Nebraska Medical Center expands its use of products from Streamline Health Solutions, adding its Epic integration suite to the content management and HIM workflow solutions it was already using.

Brad Swenson rejoins technology financing company Winthrop Resources Corporation as SVP, chief product strategy and business development officer. He was previously with Surescripts. We interviewed him in May 2011.

Awarepoint signs 191 contracts for its aware360Suite in 2011, increasing its client base to 123 healthcare systems and 186 hospital sites.

Telehealth and remote monitoring solution provider Cardiocom and Delta Health Technologies, a provider of IT systems for homecare and hospice agencies, announce completion of a bi-directional telehealth interface between their systems. 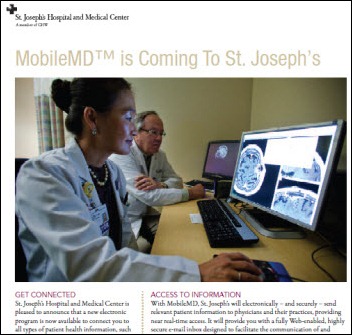 St. Joseph’s Hospital and Medical Center (AZ) announces its deployment of MobileMD for the exchange and communication of clinical information.

MGMA sends a letter to HHS Secretary Kathleen Sebelius outlining problems that practices are having with the 5010 transition and urging an additional delay in enforcing the change. MGMA warns that unless the government takes the necessary steps to resolve issues, many practices will face significant cash flow disruptions for practices and operational difficulties, a reduced ability to treat patients, staff layoffs, and even practice closure.

The defunct St. Vincent’s Hospital – Manhattan (NY), obligated by state law to maintain medical records for six years after discharge, petitions the bankruptcy court to force Allscripts to help the hospital transfer its data from its own servers to a less-expensive system. The former hospital says Sunrise Clinical Manager is costing it $17K per month and another company offered to extract its store it for $1,200 per month, but Allscripts won’t help unless the hospital keeps paying the monthly tab.

UMass Memorial Healthcare announces plans to lay off 700 to 900 employees, under the gun to trim $50 million from its budget to avoid a loss for the year.

CMIO magazine publishes its 2012 Compensation Survey. No surprise: 87% of CMIOs are men, although women are increasing in the field – up from 8% to 13% this year. Apparently I fall into their target demographic since the majority of those surveyed work at multi-hospital organizations in the south. 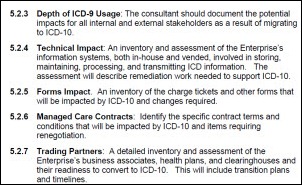 For those of you who may be just a teensy bit behind in your ICD-10 implementations, my favorite Geek Doctor John Halamka offers the request for consulting assistance that his organization used. Also included is a letter to stakeholders to identify which applications use ICD-9 and need to use ICD-10. He promises to share as much as he can as their project plans and timelines unfold, so stay tuned.

I wonder if ICD-10 has a code for this? Physicians report an increase in cyberchondria. Patients reading online information are increasingly displaying unfounded anxiety about their health. To combat the increased worry, physicians report spending more time in office visits to discuss why patients think they have particular diseases and convincing them that it may be unlikely. 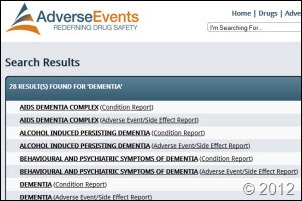 Some websites have recently caught my eye. AdverseEvents has gathered information from the FDA’s database. Users can search over 4,500 medication records. Clarimed is similar, but has information on medical devices as well as drugs and procedures. I’m sure the cyberchondriacs found them long before I did.

I just have to laugh. Earlier this month, the Department of Health and Human Services published new standards for electronic funds transfers (EFT) in healthcare as required by the Affordable Care Act. This is supposed to result in billions of dollars of administrative savings for physicians, hospitals, insurers, and states over the next decade. HHS Secretary Kathleen Sibelius is quoted as saying, “Thanks to the Affordable Care Act, healthcare professionals will spend less time filling out paperwork and more time focusing on delivering the best care for patients.” Unfortunately, the recent federal initiatives have actually increased burdensome busywork for me, as I am forced to review mind-bogglingly annoying reports about how many times I’m checking or not checking a particular box required for Meaningful Use calculations. Additionally, any reduction in paperwork due to EFT changes will likely be offset with increased mounds of insurer paperwork trying to deny care for sick patients.

A new study reports that “the majority of U.S. physicians are moderately to severely stressed or burned out on an average day.” That’s not good news for the people caring for you and your loved ones. Only 15% of physicians feel their organizations are helping them deal with the situation. Burnout has been shown to increase the risk of medical errors. Physicians cite their top stressors as the economy, healthcare reform, Medicare/Medicaid policies, and unemployed and uninsured patients. No surprises there. Executives, take note: show your docs some love and get those severely impacted staffers some help before it’s too late. 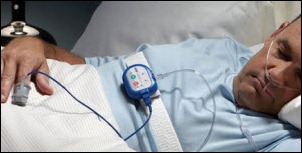 Medical Economics publishes its must-have gadget guide. One of my favorites is the MobiUS SP1 hand-held ultrasound unit which can transmit images via cell phone or Wi-Fi. Another favorite is the SleepView Monitor, which allows home testing for sleep apnea. If I would have had one in my little black doctor bag during a recent trip, I’d have slapped it on the gentleman near me on the plane. I seriously thought I was going to have to resuscitate him.

Hints on the Microsoft/GE venture’s name from Weird News Andy: “So, a portal-like product that allows information to flow between logical entities. Drawbridge is a little too intimidating. Hatch is too nautical. Aperture is too esoteric. Gates. That’s the ticket.” 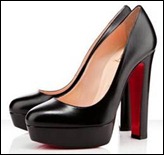 Speaking of little black doctor bags, I’m still looking for the perfect little black dress to go with mine (and with the shoes!) for HIStalkapalooza. I thought I had my date squared away, but in a surprise last-minute showing, one of my secret crushes has agreed to attend (sorry, Farzad, I waited as long as I could – but if you decide to attend, I’m sure we’d be accommodating.)

Have a question about home monitoring devices, Las Vegas bail bondsmen, or why the soles of Christian Louboutin shoes are red? E-mail me.