Rep. Renee Ellmers (R-NC) asks HHS Secretary Kathleen Sebelius to study the adoption, benefits, and cost effectiveness of healthcare IT, including its impact on medical errors. She’s a nurse and her husband is a physician; she ran for Congress as a critic of government-run healthcare. She chairs the Subcommittee on Health Care and Technology. She was quoted in a March press released as saying this about PPACA waivers:

As a nurse of twenty years, wife of a surgeon and owner of a wound clinic, I am not only aware of the problems that currently exist in the American health care system, I have seen them up close as a caregiver, a patient and a small business owner in the health care industry. Unlike the remedy we were promised, ObamaCare has done nothing to improve the quality of health care in our country, and has already done significant damage to the economy. I join Chairman Graves in asking for a full explanation of the waiver process, to ensure that individuals and small businesses are treated fairly.

From Data Dump: “Re: [vendor name omitted]. Loses years of patient data at an Epic facility, is technically unable to recover data from the backup.” Unverified, so I’ve omitted the name of the enterprise content management vendor. I’d be interested in hearing from the client, though.

From CagneyInMillerton: “Re: Yale. You are missing a big story on their not rolling out Epic. Big negative money angle and someone going after Harvard CIO position.” I asked CIO Daniel Barchi, who reports that (a) they are two months away from their first practice go-live; (b) they are under budget; and (c) the three hospital go-lives have been moved up, with the first going up in April 2012 and the last in June 2013. They are implementing Epic in three hospitals, the School of Medicine, the 800-physician Yale Medical Group, and several independent community physician practices. Daniel says if the Harvard rumor was about him, it’s not true.

From One of Their Hospitals: “Re: [vendor name omitted]. Based on a phone call our pharmacy received, they are closing their doors Friday.” Unverified. I asked for confirmation from the company, but got no response. This Ohio-based vendor offers medication and supply management systems, mobile carts, and software. I think the source is solid, but I’ll give the vendor a little extra time to respond (or call this weekend to see if the telephone has been disconnected).

From Ronnie James Dio: “Re: Computerworld article on HIT job growth. The author says SimplyHired has 7,200 HIT jobs posted out of 4.9 million. That sounded way too low, so I contacted SimplyHired to find out how they arrived at this number. Their answer: they just searched for the specific term ‘healthcare IT,’ which does not even remotely identify all healthcare IT positions. Downright goofy.”

This week on HIStalk Practice: legislation is proposed to allow PAs and NPs to qualify for Meaningful Use funds. Aprima Medical acquires an RCM company. AAFP posts its EHR survey results online. Meaningful Use incentives drive physicians to adopt EHRs. Sage Health employees volunteer at CHCs in honor of National Health Center Week. Integritas President Mary Stroupe explains why even “ineligible” providers should adopt certified EHRs. When you are catching up on your ambulatory HIT news, show some love to our loyal HIStalk Practice sponsors by clicking on their banners and learning what they are all about, Heck, they could be offering some good stuff you didn’t even realize you needed. Thanks for reading.

On the Jobs Page: Director of Public Relations, Project Manager – Healthcare Implementation, Developer I. Healthcare IT Jobs is temporarily offline while some administrative and technical work is completed to move it to a new hosting service, but it will be back soon. 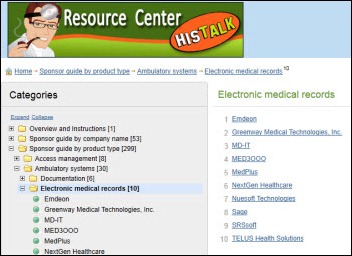 You know who’s cool? You, for reading – thanks. To take cool to the next level, consider: (a) signing up for e-mail updates; (b) socially attaching yourself to Inga, Dr. Jayne, and me on Facebook and LinkedIn (Dann’s HIStalk Fan Club has 1,751 members, so you might as well join that while you’re at it); and (c) checking out the sponsor offerings by clicking the lovely (and soon to be non-animated) ads to your left or delving deeper in the searchable, categorized Resource Center. We can’t promise to always be the most informative and entertaining site in HIT, but it’s not for lack of trying.

CSC’s Q1 numbers: revenue up 3.1%, EPS $1.17 vs. $0.91, but the earnings jump was partially due to a one-time tax benefit. The company restated guidance, but both analysts and shareholders reacted negatively. Revenue is projected to be flat even with the contribution of newly acquired iSOFT. In the earnings call, the CEO declined to speculate on the potential future of NHS’s NPfIT, a big customer of CSC and its former subcontractor, iSOFT.

The VHA awards Apelon a multi-year blanket purchase agreement for its terminology and data interoperability solutions.

UPMC and Nuance sign a 10-year agreement to develop EMR information capture technologies related to speech and clinical language understanding, as well as natural language-powered data repository searches. UPMC will also standardize on Nuance to provide speech and natural language processing tools for its 20 hospitals, 30 imaging centers, and 400 outpatient sites. Nuance says the co-developed solutions will be generally available by the end of the year.

Two years after to agreeing to merge their EMRs, officials from the DoD and VA admit it could take up to six more years to complete the project. VA insiders acknowledge that the process has been complicated by bureaucratic infighting, as each agency is unwilling to give up its legacy health system. The departments have now agreed to slowly upgrade both networks into a new shared system over the coming years.

Kansas Governor Sam Brownback returns a $31.5 million HHS grant, saying he had doubts the federal government would be able to maintain its promised future payments. Kansas was one of six states awarded grants to establish HIEs that other local governments could use as a model; Oklahoma also rejected funds for the project. Critics say the move was politically motivated. 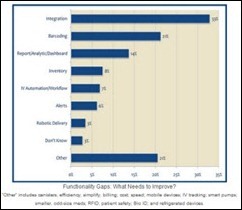 A British physician risks being “struck off the medical register” for bad behavior that includes self-prescribing medications, asking an employee to shred hospital correspondence related to an ongoing investigation, and biting a police officer.

In Australia, a software error causes the deletion of prescription records for more than 140 patients, with the conditions of 14 of them found to have worsened during that time.

Canadian researchers blame poor IV pump design for the 4.5% of medication errors that involve children receiving 10 times the intended drug dosage, often in PICU/NICU. They point out that IV pump keypads have the decimal point, zero, and confirm buttons side by side.

Mayo Clinic opens a high-tech consumer wellness information storefront in the Mall of America, intending it to be a gateway to its services. Features include wellness evaluations, symptom checkers, “trained health experience navigators,” and unnamed products for sale. Mayo says they have no plans to replicate the project in other malls, but wants to “learn about adapting its services to other settings.” 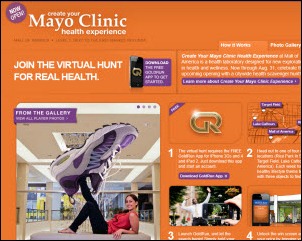 Another part of Mayo’s mall experiment: an iPhone-powered scavenger hunt. 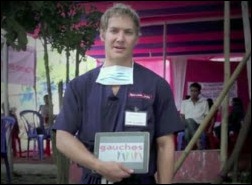 The team of GAUCHOS, an Open Software electronic charting application developed for volunteer clinicians (homeless shelters, the Operation Smile cleft palate repair organization, etc.) launches a Kickstarter project. They hope to raise $83,800 in crowdsourcing funds to complete the Operation Smile rollout and to develop a tablet version that does not require Internet connectivity. Like all Kickstarter projects (including a couple that I’ve donated money to), swell prizes are offered — $1,000 gets you a launch party invite and Web recognition, but just $15 earns a logo coffee mug.

A Sage Healthcare survey finds that non-EHR using physicians have different expectations than those actually using EHRs. Physicians already using an EHR say they’re happy if it tracks outcomes and reduces errors, while the holdouts say they expect the EHR to increase their revenue.

A computer-on-wheels catches fire at Uniontown Hospital (PA), requiring firefighters to air out the third floor.

As of last month, the American Academy of Family Physicians is no longer offering a paper mail-back card for its Continuing Medical Education quizzes. Participants will need to complete the quiz online. Definitely a step in the right direction as far as encouraging computer literacy at a basic level. Despite what those of us in the IT space might think, there are still quite a few docs out there who haven’t used a computer. Usually when those folks are integrated into our health system, I have the privilege of training them one-on-one. You’d think it would be exasperating, but it’s often very rewarding as you see one of these physicians start to realize the power of computers.

A 26-year old South Carolina man was denied participation in a federal assistance program for breast cancer patients because he’s a man. Approximately 1% of all new breast cancer cases each year involve men. This gentleman doesn’t have health insurance and didn’t qualify for Medicaid. The Breast and Cervical Cancer Prevention and Treatment Act is a federal law designed to help patients in this category;  unfortunately, you have to be female to qualify. South Carolina has tried to cover male patients under this provision in the past but has been denied. The Centers for Medicare and Medicaid Services state they’re working to find a solution.

Speaking of CMS, it recently launched the Hospital Compare website to go along with the Physician Compare website that we’re all so fond of. There is much more information available to look at for hospitals: process of care measures, outcomes measures, etc. Of course, hospitals have been more transparent about this information than individual physicians, so it’s not surprising.

In other South Carolina news, Greenville Hospital System is offering “speed-dating” events to try to match young adults with physicians. Realizing that health reform legislation will increase the number of young adults with insurance coverage (by allowing them to stay on parents’ policies, purchase through exchanges, or enroll in Medicaid) they’re using Facebook and more social events to draw these patients in.

Sometimes I receive e-mails I just can’t believe. Here’s what came from the American Medical Association the other day:

Find out how you can achieve meaningful use without an EHR. Learn about a unique approach to meeting federal meaningful use guidelines at less cost than an electronic health records (EHR)-based approach by viewing a webinar at noon Eastern time Wednesday from Amagine, Inc., a subsidiary of the AMA, and WellCentive. The program will feature a demonstration of WellCentive EHR-M.

Really? The marketing folks behind this blurb should be fired. The product demonstrated has EHR in its name. How does that make it not an EHR? Is it really any cheaper than the cheapest certified system out there?

The Department of Veterans Affairs is sponsoring a contest (complete with a $50,000 prize) to use its Blue Button download tool to develop a personal health record and place the technology on 25,000 physician websites. Over 300,000 veterans have used the Blue Button on MyHealth.va.gov to download data in the last year. The goal is to expand this functionality to the 17 million vets receiving care from non-VA providers. The contest runs through October 18 unless someone wins it sooner.

A shout-out to all of you at Community Health Centers since this is National Health Center Week. You are vital to the healthcare of so many people. I’m continually amazed by the ability of some CHCs to deliver high-quality care to a challenging population on a shoestring budget. Keep up the good work, and thank you!