From ACC_Champs: “Re: NCHICA’s response to Accounting of Disclosures. By getting input from all sides of the issue, they have drafted a great response.” Some of their concerns: 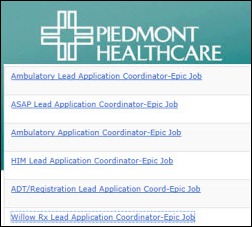 From Anony: “Re: Piedmont Healthcare, Atlanta. Can’t believe I haven’t seen it here yet, but they’re moving from Allscripts to Epic.” As usual, the best way to verify is to check the hospital’s job postings since the Epic implementation method requires hiring a ton of people fast, including posting all jobs instead of just reassigning current staff. Piedmont listed several inpatient Epic positions on July 12, so I’d say that’s confirmation. I should also mention that Johns Hopkins signed its Epic contract this week. Both will apparently be Allscripts Sunrise losses.

From Anonymous: “Re: Allscripts. Continuing to reduce workforce in Raleigh as jobs are offshored, with 15-20 folks gone in the last week or two.” Unverified.

From Nasty Parts: “Re: Compugroup. Heard on the street that they’re buying the Sage Healthcare business. Folks at Compugroup USA HQ openly talking about it.” Unverified.

From KnowurCMIO: “Re: Cerner and Epic. Epic has indeed started expanding overseas — they have a satellite HQ in the Netherlands and have already installed there. I suspect they will begin seeing rapid growth once the implementations stateside slow down. Spaarne Hospital was the first EpicCare client in Europe in 2007.”

From Bob: “Re: shoe hoarder. I read this and thought of Inga.” A Philadelphia mom who happens to be a big-money poker champ owns 1,200 pairs of shoes (one pair worth $4,000) stored in four closets, one of them a converted sitting room. She’s profiled in a film about shoe nuts, which concludes that such compulsion is related to seduction and sex. I’ll let Inga to clarify her own motives.

Listening: the new CD from teen rockers Jessica Prouty Band, sent over by her mom, who has a lot of history in HIT. Their sound has matured a lot over the years I’ve followed them, putting them right up there with Evanescence, Within Temptation, and some of the other female-led metal rockers. Big sound for a four-piece, with singer Jessica handling the bass very well. This is a really polished production – you would never suspect that the members are barely old enough to drive to their gigs. Video here.

My Time Capsule editorial from 2006 this week: When CIOs Are Under Pressure, “Man of Action Syndrome” Kicks In, snipped herein: “From my limited experience, I would say that CIOs overrule the concerns of nurse informatics people nearly 100 percent of the time and IT-based physicians at least 50 percent of the time.”

Most respondents believe that HITECH’s legacy will be increased EMR adoption, although the “waste of taxpayer money” camp was right on their heels. New poll to your right, spurred because I got a HIMSS member survey recently: how would you grade your satisfaction level with HIMSS? As always, you are able and encouraged to add your comments by clicking the Comments link on the poll, visible after you’ve either voted or clicked the View Results link. 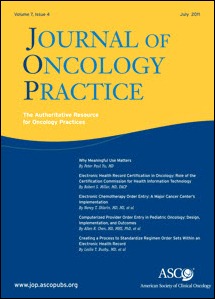 A reader sent over the full text EHR articles that were just published in the July issue Journal of Oncology Practice. Here’s a brief rundown of those I found interesting.

My sideline analysis of the MCK call (your comments are welcome):

The local paper covers the $36 million Epic system that will be in place when Orange Regional Medical Center (NY) moves to its new hospital next week. It says that stimulus money will cover half the cost.

In Canada, Nova Scotia will implement a $27 million system for sharing patient medication information, with all pharmacies expected to be linked by 2013.

Hawaii Governor Neil Abercrombie announces that Thomas Tsang, MD will join his healthcare transformation leadership team. He is ONC’s medical director over Meaningful Use, but it’s not clear from the announcement whether he’s resigning that post.

GE Healthcare Performance Solutions acquires Medical Event Reporting System, a Web-based system that helps hospitals collect and analyze patient safety events. It was developed by Columbia university with AHRQ support. The company, also called MERS, had been a GE Healthcare JV partner since 2008. A white paper on its use by Mount Sinai Hospital (NY) is here. GE says it’s working on rollouts to 16 hospitals.

Strange: the former head of Alberta Health Services (Canada), who left his job in November after repeatedly telling reporters at an emergency meeting that he was too busy eating a cookie to answer their questions, gets $735K in severance. He seemed overly peeved, but made sense in pointing out that maybe the eager beaver talking heads should attend the scheduled press briefing that was being held in 30 minutes instead of chasing him down the street for their own personal on-camera moment.