Google makes it official: the company is shutting down three-year-old Google Health on January 1, 2012. Google predictably did what its know-it-all technology company predecessors have done over the years: dipped an arrogant and half-assed toe into the health IT waters; roused a loud rabble of shrieking fanboy bloggers and reporters (many of them as light on healthcare IT experience as Google) who instantly declared it to be the Second Coming that would make all decades-old boring vendors instantly obsolete or subservient to the Googleplex; and then turned tailed and slunk off at the first sign of lackluster ROI, leaving the few patients and providers who actually cared high and dry except for those same old boring vendors who have stuck it out for decades instead of chasing whatever sector looked juicy at the moment.

Why did Google Health fail? Simple and obvious: consumer demand for personal health records is close to zero, which has always been the case and probably always will be. Convincing patients to take the time and effort to maintain PHRs is as tough a sell as convincing doctors to voluntarily use CPOE, and for the same reasons: those doing the work don’t get much benefit. Patients don’t want to maintain their own records and clinicians aren’t about to trust patient-maintained information for making treatment decisions (not to mention that taxpayer-incented HIEs and Epic’s MyChart are stealing their thunder by not relying on patient-powered sneakernet in the first place). PHRs aren’t fun. They don’t accrue Farmville points, you can’t put pictures of your cat or a funny YouTube video on them, and you don’t get HITECH money for typing in your weight every now and then. The only model Google knows involves near-universal adoption that gets advertisers salivating, not having a tiny contingent of wellness buffs and savvy chronic disease suffers using their free online service. Ultimately, Google’s problem is that an awful lot of Americans care about reality TV and celebrity gossip more than their health. They’re more interested in patch-me-up-doc “healthcare” than I-need-to-make-better-choices “health” that requires proactive electronic tools. The most shocking aspect of Google Health’s announcement in 2008 was either that Google hadn’t figured that out or that they thought they could succeed anyway.

Want to bet that Google will come crawling back to healthcare one of these days when earnings start to slip? That’s what generally happens with those short attention span technology vendors. Like Microsoft before it, Google has gone from a dominant force that can do no wrong to a clearly fallible company that makes a ton of money, but that often is more of a follower than a leader with surprisingly routine and easily predicted product failures. And speaking of Microsoft, I’m not sure whether Google Health’s timely death is good news or bad for HealthVault, a better product, but still facing the same uninterested market even with the loss of its only high-profile competitor (advantage: Dossia?)

It’s OK to include scanned documents in an EMR, say 86% of respondents, while a less-forgiving 14% of purists say no way, electronic doesn’t just mean electronic, it means discrete data only. New poll to your right, in honor of the dearly departed Google Health: do you keep a current and medical reliable electronic Personal Health Record? I asked that same question in 2007, when 88% of the most technologically and medically savvy people in healthcare said they did not (maybe Google should have taken those results as one of those warning cow skulls in the desert).

Suggestion to anyone claiming to be an insightful Epic expert: your credibility will be enhanced if you spell the company’s name right (it is not EPIC). 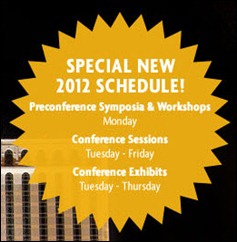 A company approached me about sponsoring the HIStalk reception at HIMSS next year (I love that I don’t have to troll to get companies interested since I don’t have the time or inclination to do that). I found out from those folks something I hadn’t noticed: HIMSS has completely screwed around with the Las Vegas conference days, with the pre-conference stuff starting on Monday (Saturday is now Monday, in other words) and the sessions run Tuesday through Friday (so everybody will need to bail out for home on Thursday instead of Wednesday). Great – now you can’t do a Saturday night stay when trying to find a cheap flight and we’ll either have to travel with all the other business schmos on Monday or fly out a day early. They’ve moved my cheese and I’m unhappy, but I’ll get over it. So, despite my concluding HISsies slide from Orlando, the reception is probably not going to be Monday night if I decide to do another one. If you’re slotted to present a Friday session, you might want to plan for a roundtable instead of an auditorium.

I am absolutely loving Vince Ciotti’s HIStory series. He’s getting lots of e-mails and kudos, even from 20-something HIT sprouts who understand the “doomed to repeat history” thing and figure they can learn from the pioneer diaries. Vince recently had calls from Jim Pesce (McAuto) and Mike Kaufman, who are following his series and contributed to the installment above (I’m really impressed with Mike’s history since I didn’t realize his deep roots when he and I have exchanged e-mails over the years).  E-mail Vince if you have some history inside your head or on paper that would round out his recollections. The industry goes back to the late 1960s (Meditech was formed in 1969), so with 40-plus years having gone by, it’s time to document some of this stuff.

Speaking of Mike Kaufman, in Googling to see what he’s up to, I see that he, along with fellow former Eclipsys SVP Hans Boerma MD and money guy Frank Panaccio formed KBT Partners, which offers advisory services to healthcare IT and related companies.

I’m also quite enjoying the work of Micky Tripathi in his monthly Pretzel Logic column on HIStalk Practice. His writing is fluid and personal (not to mention entertaining) and he’s obviously an expert in all things EMR (fortunately, since he’s the president and CEO of the Massachusetts eHealth Collaborative). I just posted his Quality Measures Conundrum piece and it should be required reading for anybody who cares about EMRs or Meaningful Use.

My Time Capsule editorial this week from 2006: Medical Equipment Sales Boom While Health IT Struggles. A snip: “The takeaway message is that, science aside, doctors and hospitals will utilize the hell out of something when they’re paid to do so (equipment, drugs, supplies, and for-profit referral centers). While it’s nice if patient care is improved, it’s only mandatory that it not be worsened.”

A Harvard Business Review working paper covers why creative tension among company executives can be a good thing. One of its examples is Misys CEO Mike Lawrie, who in 2008 insisted that the company’s open source division not be rolled into Allscripts but rather allowed to compete with it for resources, which supposedly benefited both groups.

Weird News Andy revives this story: mourners filing past the coffin at a Russian woman’s funeral are startled when she raises up and begins screaming, not nearly as dead as the local hospital had said. The funeral-goers’ time wasn’t wasted, however: the woman had a heart attack from all the commotion and died minutes later in the same hospital.

A survey finds that no surveyed physicians in the UK, New Zealand, Canada, and Sweden said they practice defensive medicine, compared to the 92% in the US who admit to letting fear of lawsuits drive their medical decisions.

CapSite releases the Lite version of its database, strictly for providers and hospitals. The Web-based tool provides access to thousands of contracts and proposals from peer institutions, complete with pricing and T&C covering 800 vendors in HIT, imaging, medical devices, and services. It’s free for 30 days and the company is signing me up to check it out, so I’ll be interested to snoop around since I love looking at contracts.

Athenahealth buys Point Lookout Resort and Conference Center, 396-acre, $7.7 million property near its Belfast, Maine operations center, which it will use for client and employee training. The facility overlooks Penobscot Bay and has 106 cottages, a bowling alley, and a beach. I’m thinking we need an HIT geek summer camp, complete with marshmallow roasts, snipe hunts, and furtive ukelele-inspired groping around the campfire.

OptumInsight (formerly Ingenix) is awarded a patent for its LifeCode natural language processing technology, which can extract content and context from electronic medical records. That technology runs the company’s computer-assisted coding applications,  which the company says can ease the transition to ICD-10.

I’m pleased with this find since I’m thrifty (cheap, some might say, including someone with whom I share a bed). I take low-dose lisinopril for blood pressure (my BP is only 115/55, but my doc likes me to take it for some reason). I thought Walgreens offered $4 generics, but they don’t any more, so they charged me $10 for 30 tablets. I looked for alternatives and found that not only does Walmart offer a long list of maintenance meds for $10 for a 90-day supply, but mail delivery to your door is free. That is Walgreens Strike 2, the first being that they charge almost $50 for a vial of Canine HIStalk’s insulin while Walmart sells their custom-relabeled Novo Nordisk insulin for only $24.88. We may have a healthcare crisis in this country, but it would be a heck of a lot worse without Walmart (at least now that they offer health insurance to more of their employees).

Atlanta-based startup Digital Assent, which developed the PatientPad ad-powered patient check-in tool for practices, raises $7.5 million in a Series B funding round. The founders came from Sythis, which developed an interactive selling solution that licensed its technology for PatientPad.

Cleveland’s MetroHealth System, getting heat from the county council about no-bid consulting contracts and excessive spending, takes positive action: it hires a $300 per hour PR company (without bidding, I assume) to help its executives practice for their appearance in front of the investigating committee.

Another Weird News Andy story that has me in stitches is this story, which he entitles Four Inches? Just a Flesh Wound. An 11-year-old girl trimming her horse’s mane opens up a 10 cm gash in her chest when the horse bolts. Her mother calls emergency response for an ambulance, only to be told to clean the wound, apply pressure, give aspirin, and then drive to the nearest hospital within eight hours or so. The hospital’s first question when she arrived: “Why didn’t you call an ambulance?”