From Quilmes Boy: “Re: Google Health. Just heard a rumor that they are not pursuing development or sales.” Unverified, but strongly suggested by the Wall Street Journal as CEO Eric Schmidt steps aside as CEO to make way for co-founder Larry Page. If they back out of Google Health, that ought to have a major effect on … well, nobody. PHRs are the consumer versions of EHRs — potentially useful technologies that, rightly or wrongly, aren’t all that attractive to their target audience in their current form.

MedQuist (MEDQ) announces that it will voluntarily delist its stock from Nasdaq in April, saying MedQuist Holdings (MEDH, the former Cbay) has bought up 97% of the shares anyway. I suppose it’s just a way to cut the administrative cost involved with keeping two publicly traded entities going.

From John’s Boy: “Re: Partners HealthCare. Announced today that acting CIO Jim Noga, formerly CIO for Mass General and its physician organization, will be promoted to CIO.”  Unverified, but John’s Boy helpfully included what looks like an internal e-mail announcement to that effect.

From Duke_ACC_Champs: “Re: another champion coming to Duke. Warrior Art Glasgow takes the health system CIO position.” Unverified. He is CTO for Ingenix. 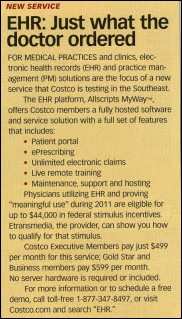 From Siouxsie: “Re: Costco. You can buy everything there, even an EHR." Next time at Costco, I can pick up a set of tires, a five-pound bag of shredded mozzarella, a hot dog, and a copy of Allscripts MyWay (via Etransmedia). In fact, since they already have a pharmacy and a contracted optometrist, I’m surprised they haven’t stuck a doctor back there by the cigarettes and beer.

From GearShifter: “Re: browser. In our IT shop, we’d love to run IE9, we’d settle for IE8, but a couple of HIT application vendors require that we run the older versions of IE for their app to be supported or in some instances run correctly. Don’t always assume it’s IT keeping you down — sometimes it’s that shiny app someone selected.” Good point. I remember fighting those battles over Windows versions – one vendor requires the latest and greatest, while another refuses to certify its application on anything developed in the last five years. Even though the major browsers assume you will always want the newest version, you would think there would be a way to have multiple versions co-exist for situations like these (or to use Citrix or some kind of virtual desktop instead). I can understand requiring IE for official work use since it’s free and ubiquitous. As long as the desktops aren’t locked down, users can always grab their own copy of Firefox or Chrome to steer clear of interfering with the standard browser. And I’ll timidly suggest this: Apple doesn’t have that problem since it controls its entire proprietary hardware and software package. If you want that kind of Apple-like hospital system where there’s only one call to make and one neck to wring, your only choice is Meditech.

From Kid Rock: “Re: Allscripts. There are many things to look at when looking at the value of corporation (and earnings is just one of them – bear in mind that free cash flows and the determination of what should and shouldn’t be discounts are judgment decisions as well). Allscripts had a big investment year. Should the cost of goodwill and capital investment in buying Eclipsys be held against them? I’m not so ready to discount Allscripts.” I said pretty much the same thing. The best time to micro-analyze current financials to predict the future isn’t a few scant months after completing a big acquisition and a skillfully led untangling from a not very competent foreign parent company.

From Alhambra: “Re: your poll on who owns patient information. Unfortunately, that may be one of the major reasons we will have difficulty in attaining true record interoperability. The financial industry has made much more movement in the use of technology without any concern of data ownership.” I was thinking after the poll that people often don’t own all the information that pertains to them. Companies buy and sell e-mail addresses and detailed demographic information from those fake “registration cards” that everybody fills in after buying something that clearly doesn’t need to be registered, like a blender. Nobody complains about companies profiting from selling that information, which isn’t even de-identified. Ample precedent seems to exist that just because information pertains to you doesn’t mean you own it – school transcripts, driver’s license records, criminal history, credit history, etc. I’d be surprised if the lawsuit against Walgreens is successful for that reason. I think they have little to fear as long as there’s something in their Notice of Privacy Practices that covers that situation under the super-broad “treatment, payment and operations” blanket (which technically isn’t even necessary for de-identified data), which doesn’t even require them to give you an accounting of disclosures if you ask. Plus, how can a patient prove their de-identified information was sold?

From All Hat No Cattle: “Re: this paper. Interested whether you think the issues raised will generate much discussion.” Only the abstract is free, but from that, I’d say maybe a little. The “unanswered questions” about EMRs include clinician liability for reviewing a glut of electronic information and overrriding alerts, the lack of a way to report EMR software problems, and the lack of alignment of who pays for EMRs (in both money and time) vs. who benefits from their use. Neither the questions nor the lack of answers are new, but the further the practice of medicine moves up the food chain from small practices to bureaucratic government, insurance companies, and mega-corporations (both for-profit and not-for-profit), the less anybody’s going to worry about the individual clinician who’s on the wrong end of these issues. Unless you’ve gone off the grid with a cash-only practice, your soul has already been sold and resistance of many kinds (EMR among them) is futile. He who provides the tools makes the rules, and let’s face it – patient benefit aside, organizations love EMRs because they allow the executives to monitor and enforce compliance with corporate policies that may or may not be in the best interests of patients and providers. I’d like to be more positive, but medicine seems to be turning into one big 1990s-style HMO where nobody’s happy except big companies and their Wall Street investors romping happily through big profits fueled by delivering as little care as possible. What everybody doesn’t like about EMRs is no more than a symptom of the underlying problem.

From American_Idle: “Re: St. Raphael’s. Due to happen, surprised it took this long. Major Epic consolidation will result in many redundancies. St. Raphael’s HIS is very patchwork.” Yale New Haven Hospital considers buying its neighbor, Hospital of Saint Raphael.

My talented offshore programmer/DBA developed an elegant workaround to the bug that was causing some readers to have problems viewing this site using old versions of Internet Explorer, like IE6. Everything should be working correctly now.

Ed Marx has added an updated to his Leadership Equations post from last week.

Elsevier also just announced free access to both First Consultant and MD Consult from all IPs originating from Japan. Elsevier wants to make the resources easily accessible to clinicians caring for earthquake and tsunami victims.

Charge capture vendor Ingenious Med gets $3.25 million in funding from Council Ventures, which assigned the resulting board seat to HMS co-founder Tom Givens.

Amerinet selects 4medica as a healthcare IT supplier. Members of the purchasing organization are eligible for preferred pricing for 4Medica’s inpatient and ambulatory EHR products.

Rutland Regional Medical Center (VT) goes live on its $15 million EHR system March 1, which it hopes will qualify it for $5-$6 million in EHR stimulus incentives.

The government of South Australia is cutting 100 healthcare IT jobs as it consolidates hospital IT functions into a centralized statewide structure. 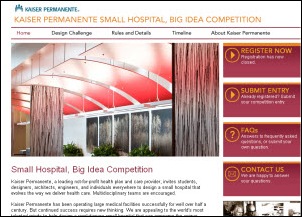 Kaiser hoped its contest for ideas of how to build 100-bed hospitals of high quality (“innovative use of technology and facility design to improve access to care and foster collaboration and team care while remaining efficient and affordable.”) would generate 25 solid entries, but they’ve received nearly 400 so far from 21 countries.

Apple says it sold out its annual developers conference in under 12 hours. Tickets for the June 6-10 conference went for $1,599 each and are now selling as high as $4,599 on eBay and Craigslist. Crazy.

Above is the next installment in Vince Ciotti’s look-back series called HIS-tory.

Another benefit of EMR: speeding the pace and cost of clinical trials. Medical centers and pharma companies recognize that EMRs provide better tools to quickly and accurately find qualified patients to recruit. With EMR, recruiting the required number of patients for large trials can be reduced from years to weeks. 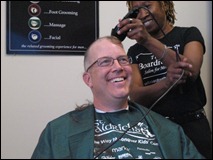 NextGen Healthcare and its parent company Quality Systems, Inc., recently challenged their employees and clients to raise $20,000 for The St. Baldrick’s Foundation to fund childhood cancer research. They exceeded their goal, raising $28,000. As a result, 15 NextGen/QSI leaders have shaved their heads, including  QSI President Pat Cline. Personally, I think bald is hot.

I got an e-mail blast from LinkedIn celebrating its 100 millionth member and noting that I (as real me, not as Mr. H) was among the first million people to join (in fact, I was around #100,000). I also noted while checking that out that the LinkedIn HIStalk Fan Club that Dann started is up to almost 1,500 very cool members. 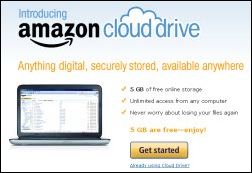 Flush with being recognized by LinkedIn as an early adopter, I signed up for Amazon’s just-announced Cloud Drive. You get 5 gigabytes of free cloud storage for files (documents, MP3, video) and unlimited access from any computer, including a Cloud Player. Buy one Amazon MP3 album and they’ll raise your free capacity to 20 GB for the first year.