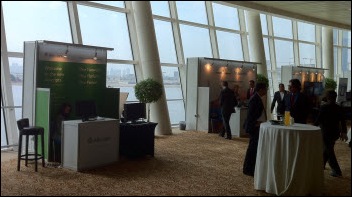 From Icarus: “Re: HIMSS Middle East conference in Dubai. Over 400 attendees are here. Lots of interest from providers in Qatar, Saudi Arabia, Pakistan, and UAE. Vendors include Allscripts, Cerner, First DataBank, Zynx, InterSystems, GE, and Hospira.” Thanks for the photo.

From Matt Yourity: “Re: business models and mHealth. What will work is ‘mHealth Plus,’ apps that are integrated with a person-centric longitudinal health record (with clinical information, claims, patient-entered information, and data from devices). Apps can integrate with each other and with processes in a robust middle layer. The business model is that we’re all paying for the cost of bad behavior, so there’s the incentive. Cute apps built in a silo are not the future.” It struck me at the conference that mHealth is where HIT was 20 years ago – everybody building their own single-purpose app because it’s cool (and because they can) rather than thinking big picture with regard to integration and user convenience. That’s a function of maturity, I think, so hopefully the “cute app” state will go away when investors realize there’s no profit potential and they probably won’t get much patient or clinician uptake anyway. If your solution requires going to a specific product’s Web site, there’s a good chance it won’t fly. The mHealth people need to be put in room with the PHR people since both need some help. The mHealth projects seem to mostly involve people with no enterprise IT experience. They’re doing what spare bedroom programmers always do – building cool stuff that may not be optimal if it ever needs to scale or broaden.

From Hollis Figg: “Re: Dell. Roger Davis, SVP of physician services outsourcing from the former Perot, has left abruptly.” Unverified. His LinkedIn profile is unchanged.

From Scratching my Head: “Re: EHR certification process. Any consultants you’d recommend that can help vendors make sense of it?” I’m sure there are several. The one I know that’s offering that service is Frank Poggio from The Kelzon Group. You’ll notice his text ad running in the right column (which is how I knew he was working with vendors on certification). Others can comment on this post and I’ll waive my usual “no commercial pitches” rule.

From Jesco White: “Re: mHealth. Your report concludes that there is no money to be made, but the opposite appears to have been reckoned by Verizon. They are supporting a big Health IT event in Atlanta.” I should have qualified my assessment by saying that the cellular carriers and phone makers are fully intending to monetize mHealth in some way, perhaps my making it a value added service that either costs extra or results in higher service fees. They were the dominant vendors at the mHealth Summit. It’s the people writing apps that haven’t figured out a business model.

From Digital Bean Counter: “Re: TAG healthcare IT summit in Atlanta. Aside from a decent turkey sandwich, it was a letdown. McKesson took the cake for the most part. I was surprised that the Verizon and Intel reps knew little to nothing about HIT, let along whatever it was they were trying to sell. The summit was mostly around the hype of hiring new people. I was amazed at how many attendees were out of work, between jobs, or in school. Funny thing is, when the floor opened up for questions, panelist balked at the ‘why can’t I get a job when I have experience’ question. At least the eye candy was decent – the industry is still doing a great job at hiring pretty ladies to rep their respective companies.” Maybe that’s what the panelists didn’t want to say – you can’t get a job unless you’re cute.

From Lucky Tech: “Re: weird news candidate. What’s next – pregnancy testing via SMS messaging?” UK researchers are working on a smart phone app that will analyze urine to instantly diagnose sexually transmitted diseases.

From CIODude: “Re: IBM. I’ve had numerous meetings this week with with ex-IBMers. It struck me that the lead healthcare people at most of the major technology companies  are all people who left IBM. Neil de Crescenzo left and is now Oracle’s lead executive. Jamie Coffin leads Dell’s healthcare group and Doug Cusick who led IBM’s global healthcare team is now leading HP. The IBM/Healthlink execs are all at Encore. Who’s left? For the first time in my career, I can’t name a single IBM healthcare executive and I’ve been very active in this industry for many, many years. What’s going on at IBM where they can’t keep people?”

From Happy Valdez: “Re: LSS. At the Meditech CIO conference, rumors were swirling about LSS Data Systems being shut out and Meditech opening a partnership with eClinicalWorks.” Unverified.

I don’t usually post news on Wednesday night, but I’m way behind from being at the mHealth Summit this week, even though Inga skillfully kept things under control. I figure I might as well clean up my inbox now instead of waiting until Thursday evening. It will be back to normal Thursday night.

Google changed its appearance this week in honor of the 115th anniversary of the X-ray, Weird News Andy noted. He also brought up the fact that Google was caught (accidentally) sniffing personal information from WiFi connections, adding, “Just how do people trust their PHR on Google Health? I don’t.”

Thursday is Veterans Day, observed on November 11 as the signing of the armistice ending World War I, which took place on the 11th hour of the 11th day of the 11th month. This is a day set aside to honor all military veterans, living or dead (Memorial Day is for those who died in their service to the country, which I say because people often don’t know the difference). But the main thing you should do tomorrow is to thank those who have served, regardless of whether their orders involved something that you agree with (they don’t get to choose). Which I would like to do right now: thank you.

I’m pleased to welcome Thomson Reuters as a new Platinum Sponsor of both HIStalk and HIStalk Mobile. The company offers the Clinical Xpert solution suite, which delivers real-time data to clinicians via the Web and a variety of smart phones (Windows Mobile, Palm, BlackBerry, and the just-added iPhone/iPad/iPod Touch). Clinical Xpert has been the KLAS Category Leader for Mobile Data Systems for eight years in a row. It gives providers tools to improve quality and reduce cost without changing the underlying IT systems, including the pharmacist dashboard I’ve written about lately, a surveillance tool to prompt clinicians to intervene, the patient information app, a billing system (powered by Ingenious Med), and a handoff tool. Thanks to Thomson Reuters for supporting HIStalk and HIStalk Mobile.

Weird News Andy notes that some Romans have put a halt to construction of a planned NHS Lothian primary care clinic in Scotland. They’re not walking a picket line, they’re dead – construction is delayed for at least six months after workers uncovered Roman artifacts from 140 AD, including skeletons and weapons.

Nova Scotia’s health minister denies the request of two large hospitals to change privacy laws to opt-out instead of opt-in, which would have allowed them to market to patients and families using information on file unless those individuals expressly declined. The hospitals said they would make sure not to send promotional materials to parents of deceased children, for example, but the health minister said they should stick to taking care of patients. The hospitals implied their marketing campaigns could have raised $40 million over the next five years. 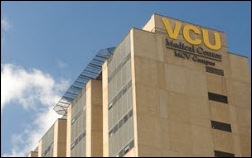 Someone who should know tells me that the Kansas City paper had the story wrong in saying that Cerner and Pulse didn’t make the original HITREC cut there, but were added afterward because they are local. Here’s the real story, they say: the Missouri and Kansas RECs had different lists and came together in a complex way to arrive at a single list, but that list was only for negotiating purposes. Missouri’s list was the one in which docs and office staff scored vendor demos and both Cerner and Pulse made that list, which wasn’t intended to be a final preferred vendor list. The whole thing was a little too complex to hold my interest, but basically the paper was correct in saying that there were two lists, but incorrect in assuming that Cerner and Pulse were added to List A to create List B.

Another point of view from someone who knows the HITREC situation there says the news isn’t whether Cerner is or isn’t on the list, but rather that their Tiger Institute investment made it questionable at all considering the whole KC-MO joint process was killed off because of that. This person says Cerner has never said how much it’s spending on the Tiger Institute program since it would then be obvious what benefits they expect to achieve from it, so they just call it “cost neutral” and nobody asks further questions. There’s speculation that since the newly elected governor’s campaign organizer is a Cerner VP that Cerner will somehow take over the state HIE effort, especially since their big campus investment on the Kansas side gives them additional clout.

Someone forwarded an e-mail update from Shareable Ink to Inga that noted two events it mentioned as making “a big splash in the industry news over the past couple of weeks.” One was $4.5 million in new financing. The other was my interview with T-System CEO Sunny Sunyal, who talked quite a bit about the DigitalShare joint project between the companies. That was pretty cool to see.

Interesting: the DoD keeps finding reasons not to use the VA’s VistA system (arrogance seems to be the main one), but the Army is looking for someone to install WorldVistA in a military hospital run by Iraq’s government in Baghdad.