From Redzenskyca: “Re: Allscripts/Eclipsys merger. New company name: Allscripts. New color: green.” The announcement is coming tomorrow, reliable sources tell us (nobody official, but people who should know). Green is my favorite color, though. Here I was criticizing the sea of orange at ACE and now it’s going to be a collector’s item or something (or sold on eBay just in time for hunting season). UPDATE: the Allscripts site has been updated with the logo above and a welcome to the merged companies.

From Curious in Texas: “Re: MD Anderson in Houston. I’ve heard they will be installing Soarian Financials. This surprises me because I thought the UT hospitals were all converting to Epic. Can you verify this rumor?” Verified. MD Anderson hasn’t signed the contract yet, but they are planning to migrate from Invision to Soarian patient accounting, ADT, and scheduling. Their primary motivation is its service-oriented architecture.

From Boomer Later: “Re: Maine Medical Center. I heard its board will meet Wednesday on a proposal to migrate from Eclipsys to Epic on a 20-month timetable. Approval is expected. It’s a blow for Eclipsys since MMC is one of their most progressive and active customers and was customer #6 on the old TDS product.” Verified. They were already using Epic on the MaineHealth ambulatory side, so this will be the next step toward their “One Patient, One Record” philosophy. Epic Enterprise will be implemented in their six member facilities in addition to Maine Med.

From Lizard King: “Re: HITECH. AAOS average member salary: $$$$. GP in private practice: $. Meaningful use is the gateway to federal $$$ to pay for HIT that providers might not otherwise be able to justify as an ordinary practice investment. Generalizing, specialists have more profitable operations and seem to have much better ROIs on HIT than GPs, so it is no surprise that MU is headed this direction. Which seems about right to this taxpayer and consultant.”

If you’ve been following the current poll and comments on Ed Marx’s Blessing of the Hands post, you may wonder why the comments suddenly turned ugly. An atheist blogger linked to it and his followers dropped by to vote and opine. Since the point was to find out what industry people think, here’s the stat that counts: the poll was running 50-50 when it was just real readers voting. 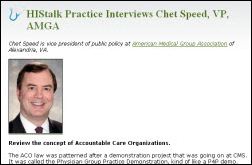 Inga interviewed Chet Speed of AMGA about Accountable Care Organizations on HIStalk Practice. It’s a hot topic, so we’ll have more soon from the hospital point of view. Hats off to her for drawing readers to HIStalk Practice, with visits up 50% or so compared to a year ago.

A Member of Parliament in England wants to know if BT was paid hundreds of millions of pounds to persuade it to stick around with NPfIT instead of bailing out like other companies did.

In the News of the Obvious, a small study finds that Facebook is a big draw for narcissists prone to encouraging shallow relationships by carefully controlling their image, bragging on themselves in their Info section, and in the case of females, posting revealing and/or doctored photos (not that there’s anything wrong with that). The conclusion is somewhat profound: “As we abandon the fake avatars and cryptic usernames of years past and begin associating our online identities with our real-world lives, our online activities begin to have more relevance to our true personality traits.”

Mike Cannavo, the one and only PACSman, cranks up a blog: The PACSman Pontificates. He was darned funny, irreverent, abrasive, and always informative when he wrote for a rag-sponsored blog, but says he got tired of being forced to change his posts every time an advertiser complained. I can only imagine what he’ll say unmuzzled. Also in the PACS and radiology world, Mike’s occasional partner in crime Doctor Dalai celebrates 200,000 blog visits. I like those guys.

In Australia, iSoft CEO Gary Cohen will resign after the company posts a $383 million fiscal year loss and a 20% drop in revenue. Shares are down 83% year to date to around 12 cents. I interviewed Gary in April.

Retired Army General Hugh Shelton, the former chair of the Joint Chiefs of Staff and a Special Forces veteran of the Vietnam War, is named chairman of the board of Red Hat.

Detroit Medical Center says its EMR saved it $5 million last year, $4.5 million of it coming from reduced length of stay related to pressure ulcers. That’s not a great ROI for a $50 million system, but it’s a good start.

I don’t look at LinkedIn often except to verify where someone works since it’s kind of junky looking and always trying to upsell additional features. Still, I was happy to hear from Dann that the HIStalk Fan Club he started there has 1,088 members, some of them spamming my hard-won audience with their own pitches, I notice, which seems kind of tacky but common for LinkedIn. Anyway, since I seldom mention LinkedIn, feel free to add Inga or me to your network (just search for HIStalk). I even added a spiffy new photo since they removed my old one. We’re more Facebookers these days (there’s that narcissism thing), so ditto: just search for HIStalk and you’ll see individual profiles for Inga and me plus our HIStalk page. I’m feeling loserly since I have only 89 friends (although I appreciate every one) vs. Inga’s 112.

The CEO of Naples Community Hospital (FL) writes an editorial bragging on the hospital’s use of its Cerner EMR. Actually he mostly seems to be bragging on the possibility of getting taxpayer money for using it, saying the hospital will be an “early applicant” for money and hopes to get nearly $12 million continuing to do what it was already doing. He says Cerner told him Naples is the second most MU-ready Cerner site.

Markle Foundation assembles (warning: PDF) 45 organizations who advocate that HIT vendors offer the “simple, but rarely offered” ability for people to download their own health records, the so-called Blue Button.

The SVP/CFO of Danbury Health Systems (CT) is charged with defrauding his employer of more than $140,000 by directing health systems payments to a software company he ran out of his house. 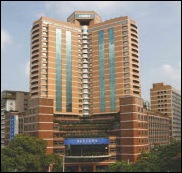 IBM and Dell chase the Chinese equivalent of HITECH money. Interesting: one hospital has more than 10,000 patient visits per day.

Bizarre: an auto accident patient says he awoke in Prince George’s Hospital (MD) and asked for food, only to be told by a nurse that he was NPO for cancer surgery, which was news to him. As he was being prepped, he noticed that another patient’s wristband had been placed on him. His wife helped him pack up with intentions of getting out fast AMA, but he claims two hospital security guards beat him and advised him that “Hell, no, he don’t come up in here and be telling us what the f*** to do.” He says a hospital manager acknowledged the incorrect wristband and invited him to have “any type of drug he wanted, just to name the painkiller.” He was diagnosed with broken ribs, a sprained shoulder, a ruptured spleen, and a concussion. He’s suing for $12 million.

From Roger Sterling: “Re: DocSite. News has it that Covisint is buying DocSite. Covisint wants to add it to the AMA portal project being rolled out in Michigan.” Unverified. I have a message out to the Covisint folks.

Quincy Valley Medical Center (WA) commits $200,000 for computer hardware in advance of selecting a an EMR application. Software finalists include Meditech 6.0 and CPSI.

Sisters of Mercy Health System launches a $60 million data center in Washington, Mo. The 42,500 square-foot center will host EHR and other applications for all of Mercy’s sites. The regional business journal also points out that the medical information is secure, as it relates to “HIPPA.”

Patient education material from Thomson Reuters and its Micromedex CareNotes system is available in 15 languages, including Arabic, Chinese, Russian, and Turkish.

On HIStalk Practice: an interview with 20-year-old Greg Waldstreicher, founder of DoseSpot. Everyone who was running a viable business at age 20 while going to school full time, please raise your hand. 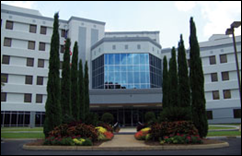 The average American hospital barely breaks even, but some have operating margins of 25% or more, according to a Forbes survey of the country’s most profitable hospitals. HCA owns 11 of the top 25 hospitals; two of Mayo’s main facilities make the list as well. Flowers Medical Center (AL) topped the list with its 53% operating margin. Fifteen of the 25 hospitals were for-profit.

Baptist Medical Center (MS) lays off 186 workers, including 14 in management. Laid off workers are being offered a chance to apply for the 136 current openings.

A baby in Italy suffers heart problems and possible brain damage after two doctors involved in his birth get into a fist fight in the operating room over the appropriateness of doing a C-section. The mother had to have her uterus removed. The region has a 60% C-section rate.