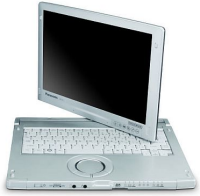 From The PACS Designer: “Re: Panasonic C1 Toughbook. At HIMSS 2010, Panasonic announced an exciting new Toughbook called the C1. It has many features that on-the-go healthcare professionals will see as being attractive.”

We have a lot of HIMSS-related observations on HIStalk Mobile. 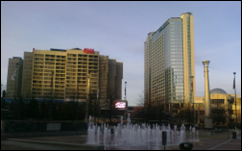 Here’s a Dr. Gregg Alexander shot of CNN, the Omni, and Centennial Park. Most of us saw it for the last time today.

A DrLyle shot, although one that would be more effective would say “Parking $35”.

I’m still tired, but here are my impressions of HIMSS10:

Provider or vendor organization you would most like to work for if salary, benefits, and job title were not factors.
Epic

HIS-related company in which you’d love to be given $100,000 in stock options that can’t be cashed in for 10 years.
Epic

Most overused buzzword
Meaningful use

HIStalk Healthcare IT Industry Figure of the Year
David Blumenthal

I am in the Atlanta airport, headed home, so this will be another quick post.

Overall impression of HIMSS10: fun, huge, and a lot of excitement in the industry. More on that in a second, but I will first throw out a few things that I found less than perfect:

Other than that…good stuff. I have to admit the educational sessions are tough for me to sit through (I failed to last the whole time for any session I attended).  Perhaps I picked the wrong sessions.

The last three days have flown by. I spent a good amount in the exhibit hall, but didn’t see all I wanted to see. I did check out a few software products and I will share more on that later. Thanks to all the kind invites to stop by booths — I didn’t get a chance to look deeply at every one, unfortunately.

And I popped in to a few parties, including Eclipsys, Allscripts, and HITmen awards. The HITmen awards had some great sushi and a lot of A-listers in the industry. I thought Mr. H was winning some award, but apparently not. Someone will have to explain to me why his name was on the promotional material but he didn’t win one of the cool plaques.

The MEDecision folks told me there were expecting 2,000 to their party, which they said was to be the largest HIMSS party. If you went, tell us about it.

Tuesday night I got back to my hotel after a VERY long day and popped up HIStalk to read the latest post. I literally fell asleep with iPhone in hand. Good thing HIMSS only comes once a year.