Submit your article of up to 500 words in length, subject to editing for clarity and brevity (please note: I run only original articles that have not appeared on any Web site or in any publication and I can’t use anything that looks like a commercial pitch). I’ll use a phony name for you unless you tell me otherwise. Thanks for sharing!

Five years ago, I was approached by a PACS vendor to put together a presentation for IT folks at HIMSS. We did the presentation titled Everything IT Needs to Know About PACS* (but is afraid to ask) off-site and had 75 people there.

Why off-site? The vendor tried to get HIMSS to sponsor the session, but was continuously rebuffed in their attempt. Exasperated yet needing to get their potential IT clients the information they wanted, this was the only way they knew how to get their information out.

Five years later, where is PACS at HIMSS? Still ostensibly a persona non grata. Of the 300+ presentations being given at HIMSS this year, only two deal with PACS. What is most fascinating is that in spite of this seemingly ongoing denial of PACS importance in the IT community, over 200 of the 900 vendors showing at HIMSS are directly involved in PACS and imaging .

An entry level PACS at a small community hospital can cost $250-300K, while a larger facility can easily spend several million dollars. IT needs have much more information than knowing just the hardware, O/S, and potential network impact, yet has few resources for these from its own society,

The dynamics of the PACS decision making has also significantly changed in the past few years. Where radiology once stood apart from other departments in the way decisions surrounding the vendor of choice were made, now nearly half (and in some cases more) of the final decision on the PACS vendor of choice falls to the IT department. And where does IT go to gets its information? Largely from HIMSS.

With so much geared towards meeting the EHR initiative by 2014 and with it the facilities share of the $20B in ARRA dollars set aside for healthcare IT, one has to question why PACS isn’t part of the HIMSS educational equation. This is especially important since radiology is second only to cardiology in overall revenue generation.

HIMSS should be commended for its role in ongoing education through virtual conferences and expos, but PACS needs to play a much larger role in this. Vendor Neutral Archives are a hot topic not just from a PACS perspective but enterprise wide as well. PACS also plays huge role in the delivery of images both to the desktop and via the web and will play a massive role in the rollout of an EHR.

Some might say that radiology has SIIM as its show, but SIIM doesn’t attract nearly the number of IT professionals or vendors that HIMSS does. Since these IT professionals are already at HIMSS wouldn’t it make sense if SIIM were a subset of HIMSS? Both entities already work together and this way everything radiology/imaging related could be seen at one trade show and not two providing IT with access to radiology-specific educational sessions as well. It’s worth a try…

Michael J. Cannavo is the president and founder of Image Management Consultants and is a 26-year veteran in the imaging community as a PACS consultant. He has authored over 350 papers on PACS and given over 125 presentations on the subject as well.

Something Wonderful
By Mark Moffitt

In this article I’ll discuss the potential future of smart phone operating systems and the impact these changes might have on clinical healthcare IT systems. 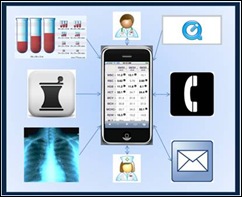 The underlying operating system of smart phones will become more robust with improved multitasking and inter app communication. This will allow developers to integrate native apps, built by others that interact with the underlying hardware of a smart phone, e.g. phone, microphone, speaker, etc., with web apps. Web apps seem best for getting and displaying data and consuming services that are unique to a healthcare system. The reason is changes to web apps can be made and pushed out to users much faster than a native app.

These enhancements will enable developers to build hybrid smart phone apps that use, for example, the device’s phone app, another vendor’s dictation app or voice to text app, and another vendor’s secure messaging app. Developers at health systems will spend most of their time writing web apps that get and display data and consume services unique to the system. Inter app communication will minimize data entry by users as they switch between native and web apps. The user experience will be similar to using a single app.

Android (Google phone OS) has these capabilities, but with limitations. The Apple iPhone/iPod Touch/iPad does not, but will, I predict, within a year. Microsoft Windows Phone 7 is similar to Apple. Make no mistake, these three vendors, Microsoft, Apple, and Google, are going to drive innovation that will benefit healthcare IT users.

Floyd: "What’s gonna happen?"
Bowman: “Something wonderful.”
Floyd: “What?”
Bowman:  "I understand how you feel. You see, it’s all very clear to me now.  The whole thing.  It’s wonderful.”

See: http://www.youtube.com/watch?v=OqSml40nwCE&feature=related – start at the 2:08 mark

“Something wonderful” is what physicians, nurses, and other care providers have to look forward to once the use case models of smart phone technology are fully realized.  “It’s all very clear to me now.” It will bring software with features that makes your work much easier and you more productive while automatically generating the data needed for reimbursement, decision support, and the legal record.

I predict physicians will use smart phones for 80-90% of their work with electronic medical records, versus using a computer and keyboard, to do work such as viewing clinical data, real-time waveforms, vitals, medication list, notes, and critical results notifications; dictation and order entry.

Disruptive technology (see: http://en.wikipedia.org/wiki/Disruptive_technology) is a term used in business and technology literature to describe innovations that improve a product or service in ways that the market does not expect.

Disruptive technologies are particularly threatening to the leaders of an existing market because they are competition coming from an unexpected direction. A disruptive technology can come to dominate an existing market in several ways including offering feature and price point improvements that incumbents do not match, either because they can’t or choose not to provide them. When incumbents choose not to compete it’s often because the incumbent’s business model blocks them from reacting, aka “feet in cement” syndrome.

Smart phone and web services technology will bring improvements of a near-magnitude order change in the price-to-feature relationship of clinical healthcare IT systems or, simply stated, much more features at a much lower cost.

Vendors that offer large integrated clinical systems such as Epic, Cerner, McKesson, etc. charge a large premium for an integrated system because the market will pay it. These vendors have built their business model to capture and defend that premium. That premium will shrink to zero over the next decade due to these disruptive technologies. I predict the premium won’t go down without a fight from these very same vendors.

By then the justification for large, monolithic, integrated, single-vendor systems will have vanished taking with them a number of vendors encased in obsolete business models. From the ashes of the fallen will rise a new pack of healthcare IT vendors leading the industry. 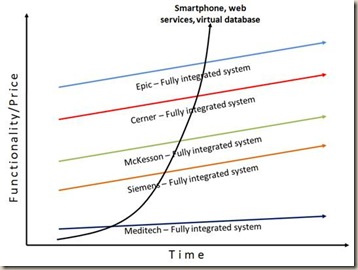 This process is called creative destruction (http://en.wikipedia.org/wiki/Creative_destruction) and is a by-product of radical innovation, something the USA does better than any other country. While painful for some caught up in the destructive wave that pain is more than offset by the gains realized by the whole of society during the creative wave of innovation.


Mark Moffitt is CIO at Good Shepherd Health System in Longview, TX where his team is developing innovative software using the iPhone, a web services infrastructure, and a virtual clinical data repository.


EHR Adoption and Meaningful Use
By Glenn Laffel, MD, PhD

No matter how you approach the issue, it is clear to see that a serious information technology gap has been created in healthcare. From restaurant reservations to banking records, American information resides electronically across nearly every sector … except healthcare.

Where do we stand? Are the adoption reports accurate? And how will these figures be impacted by the US Government’s economic stimulus investment in health IT? Let’s take a closer look at the numbers.

First, the challenge of tracking EHR use in the US. There are currently varied and discordant definitions of what constitutes an EHR. Let’s take a closer look at the reported EHR use from a few different sources

CDC reports: The Center for Disease Control released a study in 2009 reporting that 44% of office-based physicians are using any kind of EHR system and only 6% are using a fully-functional system.

Patients report: A Practice Fusion survey conducted by GfK Roper in January 2010 found that 48% of patients reported that their doctor used a computer in the exam room during their last visit.

So where do these numbers leave us? We know from these three studies that approximately half of US doctors have started to use some kind of computer system in their practice. An indication that healthcare has taken major step toward closing the digital divide? Yes. A flawed and limited statistic? Also, yes. We don’t know exactly how these physicians are using the reported EHRs and computers. Practices may just be scheduling or billing with their electronic systems — two features that don’t contribute significantly toward improving quality of care.

Meaningful Use will set the bar high. Starting in 2011, we should be able to have a much more detailed perspective on how doctors use EHR technology. The 25 Meaningful Use criteria (currently still in draft with HHS) require demonstrated use of e-prescribing, CPOE, charting, lab connectivity, and more. As the name states, with the new HHS guidelines will help us to “Meaningfully” understand “Meaningful” EHR use.

Improving these adoption rates. EHR adoption has been slow in the past due to several factors: high upfront costs for traditional health IT programs ($50,000 or more per user), high levels of IT infrastructure needed for installation and maintenance, and concerns over changing workflows. The $44,000 stimulus for EHR adoption under ARRA removes some of the cost barrier with legacy EHR systems. It also creates a dynamic market for doctors to price compare and find affordable solutions to fit their needs.

As the start of the incentive program approaches, it will be interesting for those of us in the sector to track changing EHR adoption rates and see if the government’s hope for exponential EHR adoption growth becomes a reality.