From Joe: “Re: NIST certification award. As I understand it, this is a contract extension of work that Booz is already delivering, modifying the simulation model for HIEs to test their connection to NHIN. That is the tenuous connection to certification since HIEs are expected to be an information source for CMS and a transfer point for regional hubs.”

From JJ: “Re: shortage of HIT workers. Do you have any information on the workforce situation?” Quite a few studies and SWAGs have been done, all claiming that the industry will grind to a halt due to a lack of experienced informatics people (especially the good ones). I hesitate to name any particular prediction since there are several and they vary widely. ONCHIT has even weighed in with similar conclusions. So while I think predictions on magnitude may differ, pretty much everybody says there will definitely be a shortage as lots of people try to implement systems simultaneously due the HITECH window.

From The PACS Designer: “Re: Boxee. Another cool application has appeared that may be of use to HIStalkers. It is called Boxee and makes linking applications simple. With Boxee and a cable that sells for under $20, you can link your PC to your TV. Even MR. H can link his music on Pandora to his TV!” The folks who designed the Xbox 360 are designing the Boxee Box, which will go on sale shortly at under $200 with support for media of most every kind and some Web pages (Facebook, Twitter, etc.) Until then or as a free alternative, you can hook up your laptop directly to the TV and run the free download (Windows, Mac, Linux).

I ran a anonymous reader’s rumor claiming that Yale New Haven is replacing Eclipsys with Epic (no details were provided). Eclipsys e-mailed to say that is not true. I was at work at the time, so I removed that item pending further research (hard to do since Epic doesn’t issue press releases when they win and Eclipsys doesn’t issue them when they lose, which is why I ran it in the first place because I thought maybe it was commonly known even though Google turned up nothing). I asked Eclipsys for a statement from the hospital and haven’t heard back, but another reader ( not anonymous) said YNH has three hospitals, multiple systems, and outpatient facilities, so Epic could be in play somewhere or maybe nowhere. Anyway, I originally said the rumor was unverified and it remains so, but further information is welcome.

A couple of readers have reported crashing IE8 when opening the HIStalk page. The culprit appears to be the poll to your right, hopefully something to do with JavaScript and not the fact that it is reporting that 2/3 of respondents take a dim view of Microsoft’s involvement in healthcare. Nothing has changed on my end. I only use Chrome and occasionally Firefox, so I had no idea. It’s actually a known issue with IE8 and possibly Win7.

McKesson reports Q3 numbers: revenue up 4%, EPS $1.19 vs. -$1.12 (although most of that prior year’s loss was because of their AWP settlement). That beats Wall Street estimates. Technology Solutions didn’t do so great, with profits down 11%, although some of that was due to amortization of its revenue management product that went GA during Q2.

I am happy to welcome Anson Group of Carmel, IN as a Platinum sponsor of HIStalk. Their Connected Health Practice has a multidisciplinary team of experts ready to help clients commercialize their healthcare products while meeting regulatory requirements. They work with device manufacturers that provide networked devices to hospitals, tech companies submitting FDA 510(k) forms, consumers, and traditional HIT vendors interested in connecting their EMR, PACS, and other clinical systems to drug and device products. The company covers the gamut from FDA, HIPAA, reimbursement, coding requirements, and post-market support for participants in Connected Health. I was interested in their case study describing their work with a university to commercialize internally developed CT imaging technology. Thanks to Anson Group for keeping the keyboards clicking here at HIStalk.

Wednesday is Apple Tablet day, supposedly. Is it an e-book reader? A supercharged netbook that runs iPhone apps? An overpriced version of a form factor that keeps failing? Yet another category killer that demonstrates how well Apple develops products, or perhaps how poorly their competitors do? We will know soon. Speculative rendering above by Wired/CNN.

Huffington Post has an interesting story reminding that when you open up electronic records to patients, somebody’s going to have to explain to them what the heck they are reading. Something as simple as displaying a routine lab result as “abnormal” will freak out some of them (generating anxious, no-reimbursement calls). Hopefully it will work as well as the system my doctor uses, where he adds a comment at the top of each results page to tell me what’s important. That probably takes us full circle back to paper charts, which providers were reluctant to let patients read not because they were secret, but because patients might do something irrational due to their lack of understanding. It’s not much different than trying to decipher that cryptic work order that your mechanic uses when aligning your car’s front end – invaluable to the mechanic, worthless to you.

It’s the end of HITSP, at least for now. The organization’s contract with ONCHIT has run out, although it or its participants will probably resurface in some form. I heard its final lunch this week was billed by ANSI as a celebration, but felt more like a wake because it was the end of the line.

Inga and I keep getting e-mails asking about the HIMSS reception, so here’s a minor change in plans: the RSVP Web page will be activated on Thursday. Don’t worry, sign-ups haven’t started. 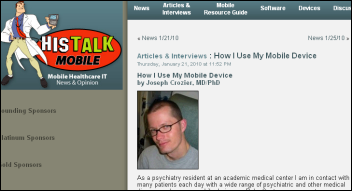 On the brand new HIStalk Mobile, we have an editorial on the impact of HIEs on mobility and a fun physician report on How I Use My Mobile Device. If you are a doctor or nurse, why not tell us how you use your mobile gadgets? And while you’re on the site, subscribe to the e-mail updates to stay in touch.

A couple of readers e-mailed that they liked my Marry in Haste, Repent at Leisure: Choose your EMR Soul Mate Carefully editorial, which I appreciate. Since they went and encouraged me, I wrote my next one for Inside Healthcare Computing about the most visible employee of any EMR vendor, called Notice of Proposed Rulemaking: Everybody Must Watch Jay Leno at 11:35 Eastern, a riff on Meaningful Use.

Weird News Andy digs up a French-language video showing an inflatable hospital like the ones Doctors Without Borders will set up in Haiti. “No wonder healthcare costs are inflated,” he shamelessly quips.

Hackers hijack the e-mail accounts of several high-profile doctors in India, sending out e-mails asking friends and patients to send money by Western Union. Several did. At least one of the doctors wasn’t so bright: he got an e-mail claiming to be from Gmail telling him to e-mail back his user name and password or his account would be terminated, so he did.

At a primary care summit in Canada, a Kaiser Permanente presenter says EMRs can improve quality and outcomes, but a Canadian researcher says there’s no evidence to prove it and that Canada’s EMR investments are being driven by vendor profit motives rather than evidence. Interestingly, the Kaiser presenter also said that “none of the things we’ve achieved can be achieved within a fee-for-service healthcare system,” meaning as I read it that even Kaiser questions their value for most providers.

Kudos to Inga, who was prowling around this weekend and found that the online comments about the proposed Meaningful Use rules were visible on HHS’s site. I ran that information with the link Saturday afternoon. At least one publication ran it as “breaking news” Monday, although it was not mentioned how they obtained that bit of intelligence.

Two former owners of City of Angels Medical Center (CA) will pay $10 million to settle a lawsuit for paying recruiters for bringing in homeless people for unnecessary medical treatment that was billed to Medicare and Medi-Cal.

BCBS Tennessee says it has spent over $7 million in response to the October theft of 57 old computer hard drives, including hiring more than 700 contractors to determine what data they contained. The drives, which were taken from an abandoned office and scheduled for permanent disposal, contained personal financial and clinical detail on as many as 500,000 individuals. I realize that identity theft is serious business, but am I the only who appreciates the “economic stimulus” that has resulted from this theft?

Day Kimball Healthcare (CT) selects athenaClinicals and athenaCollectorM for its network of 200 physicians.

Mountain States Health Alliance signs an agreement to implement Schedule Maximizer and Order Facilitator from SCI Solutions. Mountain States will use the SCI products to support centralized scheduling across nine of its Tennessee facilities.

Virtual Radiologic releases its 2009 financial results, highlighted by a 13% jump in revenue to $121 million. Adjusted EBITDA grew 34% to $27.6 million.

HealthGrades releases its annual Hospital Quality and Clinical Excellence study and concludes the top 5% of hospital have a 29% lower risk-adjusted mortality rate. The top hospitals also had a 9% lower risk-adjusted complication rate. HealthGrades claims that more than 150,000 Medicare patient deaths and 13,000 in-hospital complications could be avoided each year if all hospitals performed as well as the top 5%. The complete list is here.

Healthland appoints Julie Weber-Kramer to the role of VP of client experience, meaning she’s responsible from the Healthland client relationship from initial contact to ongoing support. Most recently she served as a professor of management at the G. R. Herberger College of Business at St. Cloud State University.

Emdeon acquires FutureVision Technologies, a provider of electronic data conversion and information management solutions. Using FutureVision’s document conversion technology, Emdeon will be able to electronically process all patient and third-party healthcare agreements regardless of the format. Emdeon paid $20 million in cash at closing and may pay as much as $40 million more, depending on FutureVision’s financial performance over the next three years. 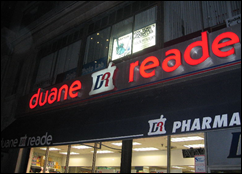 Continuum Health Partners (NY) plans to expand its partnership with Duane Reade drugstores. Over the last two years, Continuum has placed physicians in Manhattan walk-in medical clinics located within Duane Reade pharmacies. Both companies say the arrangement has gone better than hoped and another 20 clinics will be added over the next year. No money exchanges hands between the two companies. Instead, Duane Reade benefits from increased retail sales, and the hospital system offers follow-up appointments at its own facilities. The companies believe that having clinics staffed with physicians, rather than PAs or nurse practitioners, is one reason for the arrangement’s success.

SRS names David Thomas to its Board of Directors. Thomas is the former chairman and CEO of IMS Health and a 28-year IBM veteran.

As Mr. H mentioned, I touched base with a few sponsors last week. Here are a few more updates:

When an article has headline like this, how can one not be compelled to read the details? Seems as if the San Diego-based company Histogen has discovered “the cure” for baldness, but operations are a bit stalled due to a lawsuit. Apparently another company thinks Histogen and its execs stole proprietary hair growth secrets. Meanwhile, millions of men are left suffering. Personally, I hope the cure is never found. When it comes to sexiness, I think a shiny bald head may even beat out a pair of Christian Louboutin high-heeled pumps.