From: TV Critic “Re: ‘Biggest Loser’ Loses Paper with help of GE’s EMR. Did you see this – actually pretty good marketing! Reminds me of 30Rock and all their corporate synergies.  Hmmm… maybe they could do a Mercy showing the nurses getting mad at the docs for not using CPOE, or a Law and Order on people who violate HIPAA, or a new Hero who has the ‘ability’ to actually use an EMR efficiently :)” It’s a curious world we live in. Perhaps they could do an American Idol and the “winner” would be the provider that documents the most complete chart at the point of care. Also curious: the only link I could find to this article was in the Ethiopian Review. I would have never guessed that Ethiopians were fans of Biggest Loser.

From: Trouble Brewing “Re: Ambulatory physician eligibility for ARRA. Thanks for providing the additional explanation about how a  hospital-based EP is defined. Lots of physicians and hospital administrators are not happy with the likelihood that a big segment of the physician population will be left out in the cold.” I’ve heard similar feedback. The committee reasoned that if the physician was using hospital owned clinics or facilities, they would most likely be paying for their own EHR. Maybe true, maybe not. If the hospital is paying for the physicians’ EHR and no one is eligible for stimulus funds, wouldn’t a hospital be inclined to make ambulatory EHR a lower priority and instead follow the money? I suspect we’ll hear more on this topic.

I’m flying solo today while Mr. H is out and about. I’m actually not sure what he is doing but I hope it is something fun.

Siemens names Eric Spiegel CEO and president, taking over for the retiring George Nolen.The official press release hails Spiegel a top influential international management consultant and energy expert who previously served as SVP and senior partner at Booz & Co. I didn’t note anything in his background related to healthcare, by the way.

eClinicalWorks joins several competitors in offering a guarantee that its software will meet meaningful use criteria. The company is also offering free meaningful use webinars, and, onsite and online readiness assessments. eCW says that 2009 was a great year for them, with revenues exceeding $100 million for the first time.

Congrats to Bill Spooner of Sharp Healthcare (CA) who was named CIO of the year by CHIME and HIMSS. In addition to his lifetime achievements in HIT, Sooner was recognized for spearheading his organization’s EMR transition.

Hum ho. Yet another insurance company reports the loss of confidential patient information. BCBS TN announces 500,000 patients records may have been compromised after 57 computer hard drives were stolen from a closet. The company believes at least 220,000 records included social security numbers.

Apparently the state of Connecticut was not happy about Health Net’s privacy breach last year. The state attorney general is filing suit against the company, charging it with violations of HIPAA privacy and security rules, based on the disappearance of a hard drive. The company believes the missing drive contained PHI on 1.5 million members, including 446,000 from Connecticut. 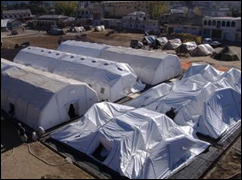 The news out of Haiti is mind-numbing. This article highlights the work of Doctors Without Borders, who have already set up four tented facilities to treat the injured. Some are working in undamaged hospitals in Port-au-Prince, while others try to identify medical structures that are still intact.The organization is also waiting on the arrival of an inflatable field hospital, which sounds like a incredible piece of technology that includes two operating theaters and 100 beds. Lots of worthy organizations like Doctors Without Borders and The Red Cross are, of course, accepting donations. If you’d like a quick option, you can text “HAITI” to 90999 on your cell phone to donate $10 to Red Cross.

I was recently asked how I got this great opportunity to work with Mr. H and HIStalk. Almost three years ago, Mr. H made this small comment about needing an extra hand: “I need some help doing HIStalk (writing, chasing down information, etc.) If you know someone who’s interested and who might work remotely for a less than extortionate pay rate, let me know. I was thinking about hiring a grad student who might work a few hours a week to handle routine stuff. I’m just completely tapped out on time.” Since I was a big fan and at a point in my career where I had a bit of extra time, I begged him to hire me. One phone call later I was on board. When I arrived in April 2007, HIStalk had about 42,000 views for the month; today, between HIStalk and HIStalkPractice, we average nearly 100,000 hits a month. Mr. H is still tapped out and HIStalk now takes me more than just the original “few hours a week.” And it’s probably the most fun job I have ever had.

Here’s something to contemplate: by 2020, the newest doctors will have been born after Amazon.com and will have never known a world without email or cell phones. MEDSEEK will discuss the impact of technology on patient care in its upcoming webinar “2020 Vision: The ePatient Evolution Over the Next Ten Years.” Register here for the January 27th event.

Ridgeview Medical Center (MN) expands its use of Wellsoft’s EDIS program, upgrading to v11 and adding electronic OE, charge capture and an HL7 interface to McKesson’s Paragon HIS.

Coming to HIStalkPractice tonight: ten execs answer the question, “What kinds of practices will be able to reach the 80% CPOE level?” I was personally a little shocked that a couple CEOs thought it was going to be so easy. Sign up for e-mail updates while you’re there.

Good news. Americans are not getting any fatter than we’ve been over the past 10 years. Of course a “hefty” number of adults (73 million or 34% of the adults) are still obese. A greater percentage of women are obese than men, but the guys are catching up pretty fast. Unfortunately, so are the kids. Perhaps too many folks are just sitting on their couches watching shows like the Biggest Loser.