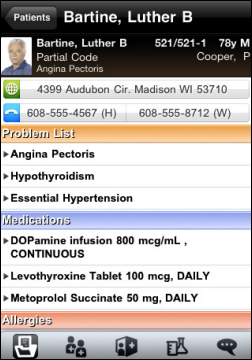 From Situation: “Re: little Epic app. Haiku available now. Get it from iTunes.” I like that it even has tallman lettering on the drug names. The one mention I found says users need a Haiku license and Epic Summer 2009. It works on the iPhone and iPod Touch.

From Colleen: “Re: Meaningful Use. Looks like the comment period has opened.” It sure does, even though ONCHIT just told be it would be Wednesday. You can submit comments electronically on the Meaningful Use criteria. The link to the larger reimbursement document isn’t working yet.

From SniffSniff: “Re: RHIOs. I’m working with RHIOs in various locations. A large vendor is not playing nice — won’t share data, won’t participate, and is pushing its hospitals to not be part of the health exchange. It’s apparently coming from the top. Yep, you guessed it — Epic. I’m going to the client in two weeks to explain this and advise them against the EHR, solely based on this reason.”

From Proust: “Re: HIMSS Analytics Stage 7. University of Wisconsin Hospital and Clinics got its designation on January 7, another Epic facility.” Do you suppose its outcomes and costs showed improvement and are superior to its lesser-staged competitors? My guess: no.

Ingenix will announce that it will offer interest-free loans to practices who buy its CareTracker PM/EMR. In addition to guaranteeing that CareTracker will meet meaningful use technical requirements, Ingenix says it will also help providers qualify for CMS incentive payments. Here’s their best pitch, though: the Web-based CareTracker EHR costs only $23,500 over five years, less than the ARRA reimbursement of $44,000 over five years.

US CTO Aneesh Chopra, speaking at the CES show in Las Vegas, emphasizes healthcare IT:

“We don’t have a lot of innovation yet about how consumers can communicate with our electronic health record systems and smart meters and frankly education technology. We need more innovation. If you ask how many people receive an electronic record of their health information after they visit a physician or a hospital… I would be shocked if it was more than five percent. It’s probably more like two percent. That’s one of the provisions we’re calling for — the ability of patients to get records within 48 hours of their request. We should have a fairly open standard that will allow entrepreneurs to make that a low-cost product that physicians and hospitals could acquire.”

I’m not sure anything about HITECH encourages innovation, low-cost products, or entrepreneurs, but that’s what he said.

Ninety-four of the 100 University of Missouri Health Center IT employees who were offered a chance to transition to the Tiger Institute the hospital created with Cerner take the offer, with six passing. Those 94 are now Cerner employees, bringing their seniority along and keeping their current salaries plus $1,000. Some of them think that’s unfair given that they are now Cerner employees working for state employee wages. “We have a ton of experience, so we don’t want young whippersnappers coming in making $10,000 or $15,000 more than we are.” Did he really say “whippersnappers?” I’d bet the number left in a year is a good deal less than 94.

An Arkansas county jail will make prisoners responsible for paying a co-pay for medical treatments and prescriptions. The ordinance was approved by justices of the peace, who also passed a “pay for stay” ordinance that bills convicted prisoners for their room, board, and transportation to and from jail.

Royal Victoria Hospital in Barrie, ON launches its TELUS Sourcing Solutions HR systems as it begins recruitment for over 1,000 new employees to staff its expansion.

SAIC gets up to $14 million over five years to support the VA’s blood bank software.

Odd lawsuit: a man trying to determine if his surgeon made mistakes sues University Community Hospital (FL) when the hospital tells him the search through decades of paper information will cost him more than $1 million. The hospital explained that its employees would have to manually search patient charts and redact privacy-related information. The lawsuit demands that the hospital prove its actual cost of producing the records.