From: Samuel C. “Re: Yesterday’s health care bill. After yesterday’s health care bill it is safe to say: ‘It could probably be shown by facts and figures that there is no distinctively native American criminal class except Congress.’ – Mark Twain.” The Senate health committee approves legislation that includes a plan to provide nearly every American with health insurance, regardless of income or medical condition. The program also calls for a government program to compete with the private insurance companies. Opponents include the private insurers, as well as small business owners who fear the financial burden of providing healthcare for all employees.

From: Little Birdy “Re: MED3000. I hear that in addition to Tom Skelton, another former Misys VP is coming out of retirement to join the company. Look for an announcement in the next couple of weeks.”

Yesterday we published an interview with Mr. H, which is a must-read for any HIStalk fan. I’m not sure he revealed too many secrets, but the piece does re-iterate how hard he works and how humble he is (am I gushing?)  I must admit I didn’t know the interview was coming and was a bit surprised by it. I’ve long asked Mr. H to do an interview, but he always turned me down. So, thank you Dr. Gregg Alexander for being a better arm-twister than me. Mr. H actually skipped town for a bit, leaving me at the helm. I am pondering if there is any correlation between the kind words he had for me and his delegation of all the HIStalk chores for a few days. 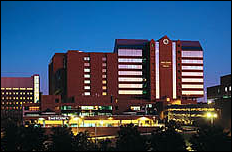 Meanwhile, GE wins a $12.5 million from LSU Health System (LA). GE will provide LSU the technology to digitize its central database and radiology image repository. The GE contract is just the first phase of LSU’s $116 million, five-year plan to add EHR throughout its 10 public hospitals and 500 clinics.

Boston Medical Center is back in the news, this time for filing a law suit against the state of Massachusetts. BMC accuses officials of illegally cutting payments made to the hospital for treating thousands of poor patients. The state says it has done nothing wrong, and officials are quick to point out that BMC has received $1.5 billion in state funding over the past year.

Sunquest Information Systems introduces a new release to its lab and POC solution suite. The updated version incorporates new modules for molecular testing, along with increased functionality and workflow enhancements for existing applications.

The University of Ottawa Heart Institute cuts its hospital readmission rates 54% for patients participating in a home telehealth monitoring program. The program is also attributed with saving $20,000 for each patient not re-admitted.

Henry Ford Health System extends its IT outsourcing agreement with CSC for another 63 months. The value of the new contract is estimated to be $115 million.

The American Medical Informatics Association (AMIA) submits comments to the ONC and HIT Policy committee, stressing that EHR certification does not necessarily equate with effectively using the system’s available functions, nor does it assure changes in clinical practice or patient outcomes. AMIA does not believe the current certification process is sufficient and stresses that certification should focus on process and care improvements over time.

Meanwhile, the ONC’s HIT Policy Committee approves the latest revised definition of EHR “meaningful use.” Since the initial definition last month, the committee made a few tweaks to its draft, including:

The information storage vendor Iron Mountain sponsors a white paper recommending the federal government maintain a 10-year retention policy for paper records. The 10-year retention window would give providers plenty of time to migrate to electronic records. And, perhaps give Iron Mountain plenty of time to fully migrate its business model from its original off-site document storage roots.

The Nashville Area Chamber of Commerce names ICA to its list of Future 50 Award winners, based on its projected growth in revenues and employees over the next three years.

iMedica changes its name to Aprima Medical  Software to avoid confusion with several other similarly-titled healthcare companies. The company also rolled out a new website, aprimaehr.com. 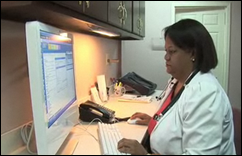 HIMSS gives Dr. Regina Benjamin a thumbs up following her nomination for Surgeon General. After Hurricane Katrina, the HIMSS Foundation actually provided Dr. Benjamin’s clinic a $5,000 grant to acquire EHR hardware and services. Dr. Benjamin and her staff are featured in this short video about EHR and the HIMSS Katrina Phoenix Project.

A Florida mans sues a physician at the Age Defying Surgical Center in Florida after he was denied a hair transplant. Apparently the 28-year-old hair-challenge patient is HIV positive and Florida law forbids denying medical treatment based on HIV status. The lawsuit is for at  least $15,000. I’ve said it before, but I don’t get why men get so hung up on hair loss. Bald is sexy.