From The PACS Designer: “Re: Ning. TPD was looking for a collaboration tool for a new project and came across Ning. While it is touted as a ‘New Social Network’, it still can be used as a collaboration network when participants are working from remote locations and need to remain part of a discussion process or work development activity that spans multiple locations. Even HIStalkers could form their own social networks based on HIStalk postings and topics!” I actually tried it awhile back and liked it.

From Custard’s Last Stand: “Re: ‘I hate my job’ blog. Perhaps this kind of info could be off to the side somewhere, like a sub-blog? I do think there is some value in learning about company cultures, trends, how they treat employees, etc. BEFORE you apply for a job.” I agree, although the happy employees aren’t usually as motivated to post as the unhappy ones, so every employer looks bad. You also can’t tell if anyone is who they say (management? competitor? psychopath?) JobVent is the big one, but I’m pretty sure I remember that companies have successfully threatened the site and forced them to remove negative postings, so it’s still caveat emptor. Just to give you an idea of the scores: Cerner (-1326), McKesson Provider Technologies (-24), Epic Systems (152), Meditech (-234), and Perot Systems (-545).

From Ralph Hinckley: “Re: Orion Health. I’m a former employee, laid off in January. They had another round this week, at least eight in the US and unknown in New Zealand.” Unverified.

Listening: Dengue Fever, an LA band whose music sounds like something out of Vietnam in 1969: Cambodian pop mixed with US psychedelia. I cheerfully acknowledge that maybe it’s not for everyone. Also: The Sword, Austin-based Sabbath soundalikes.

I was reading about medical fraud in which low-paid hospital clerks sell copies of the insurance or welfare cards of patients, which are then used to submit fraudulent bills (which, surprisingly, are usually paid). The article made an interesting point: welfare patients don’t get any kind of receipt that shows what has been paid on their behalf, so they couldn’t detect the fraudulent use of their credentials even if they wanted to. We’ve really made it too easy: someone else not only pays for the care, but the recipients never even see a bill.

Three Cleveland community health centers will get $2.7 million in stimulus money next month, with an EpicCare-compatible EMR on the list of projects to be funded.

Don’t forget the HIStalk Events Calendar, where you can post your HIT-related conference or Webinar for free. A couple of new conferences have been added.

Parkland goes live with its inpatient EMR (Epic, if I remember right and always a safe guess if the hospital is > 400 beds). 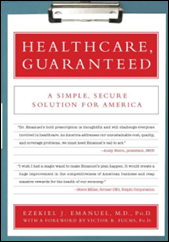 The New York Review of Books covers Healthcare, Guaranteed: A Simple, Secure Solution for America, by Ezekiel Emanuel. A good quote: “To remain competitive, many not-for-profit hospitals promote their bottom line just like their for-profit counterparts, vigorously advertising their facilities and services to the public. No other health care system is as focused on generating income as ours, and in no other country is medical care marketed and advertised so aggressively, as if it were just another commodity in trade. This increases health costs, while hospitals concentrate on the delivery of profitable, rather than effective, services. It also favors those who can pay over those who need medical care but can’t afford it … In 1980, after medical organizations lost some costly antitrust trials, in which they were accused of such offenses as limiting doctor fees or denying staff privileges, the AMA changed its ethical guidelines, declaring medicine to be both a business and a profession. This lowered the AMA’s barriers to the commercialization of medical practice, allowing physicians to participate in any legal profit-making business arrangement that did not harm patients.” The answer he’s proposing sounds like the Mayo (and Kaiser, Marshfield, Geisinger, etc.) model, with multispecialty group practices made up of salaried doctors.

Sentry Data Systems announces that it has added wireless scanning to its Sentinel RCM hospital pharmacy management system (procurement, operational visibility, financial management, and department management). They’ve also created a site that covers the Deficit Reduction Act that mandates true NDC number reporting on Medicaid drug claims (a good reminder that despite good intentions, the government is clueless about how healthcare is actually delivered). Sentry’s DRA white paper is a great intro, including why it’s hard to comply.

Good thing I got the Mac and iPod Touch when I did: the lines at the Apple store are back, this time for the new iPhone 3G S (or maybe the $99 basic iPhone). And speaking of Apple, The Wall Street Journal says CEO Steve Jobs received a liver transplant two months ago in Tennessee, where wait times are short. Only two hospitals there do adult liver transplants and Vanderbilt denies it was them, but I wouldn’t bet on that.

Louisiana passes a bill that will set aside $5 million to provide EMR loans to providers (or more accurately, to give the state access to stimulus money).

Dennis Quaid and his wife settle the lawsuit of their heparin-overdosed children against Cedars Sinai for $500K.

I admit I’m stupid: I don’t see how it’s possible for a company to buy its parent like WebMD did (and for stock instead of cash at that).

eClinicalWorks signs a partnership deal with Scantronix, which converts paper medical records into digital ones.

Texas billionaire Allan Stanford, whose Antigua bank is the primary shareholder of healthcare software vendor Health Systems Solutions, is in US custody and charged with a $7 billion Ponzi scheme that could put him away for 250 years. Antigua’s bank regulator has been charged with accepting bribes from the bank. His bigshot lawyer defended Enron bankers, cult leader David Koresh, and former House Majority Leader Tom DeLay.