From Nasty Parts: “Re: Allscripts. They will announce the acquisition of Medfusion and Medem shortly, bolstering their physician connectivity capabilities.” Consider it unverified and, until further notice, untrue. Hypothetically speaking, it seems to make good sense and there’s some history there — Allscripts and physician connectivity vendor Medem have worked together and Allscripts bought 3% of the company and $2 million of its debt in 2004, while the former Misys Healthcare Systems created its consumer portal with Medfusion, which is based in Cary, NC, next to Raleigh. 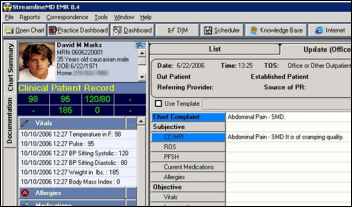 From Inside Ohio: “Re: Propractica (StreamlineMD CCHIT-certified EHR). Heard rumors that it has gone out of business.” Not so, according to Sean Mullen, president of the company (who, when I called him, started off by brusquely saying he’d never heard of HIStalk, which I tried to overlook). I got voice mail at the listed telephone numbers, but one of the support reps gave me Sean’s cell phone number, saying they have a new phone system. Sean says StreamlineMD was formed May 1 when EMR vendor Propractica merged with Professional Receivables Control, an Akron practice management systems company. Business is stronger than ever, he says (it might be even stronger if humans answered the telephone numbers listed on the Web site – that’s some pro bono advice).

Listening: Anvil, since I saw a VH1 commercial for what sounds like a great new underdog documentary (not “mockumentary” like Spinal Tap, even though the lead guitarist’s name is Robb Reiner) about this early 80s Canadian metal band that went nowhere, but influenced everyone from Metallica to Megadeth and still trudges on today. Ebert gives the movie three stars, calling out funny-sad scenes that led to their obscurity, like their bad, barely English-speaking management booking them in Japan for a 9:45 a.m. concert. I like to see old has-beens finally win, so I’m rooting for them to make a comeback, even though their music is kind of Whitesnake-y at best.

I always enjoy getting the latest Medicity newsletter, so it was even better to see HIStalk mentioned in it (for naming the company’s booth as the coolest one at HIMSS and also your voting its merger with Novo Innovations as the smartest vendor strategic move). It also included results from a survey of 24 Medicity Novo Grid customers, in which more than 60% of those who connected their EMRs said they saw improvements in patient care, staff efficiency, cost, and hospital relationships. Both of the company’s CHIME focus groups received 100% “top box” scores (excellent or very good). They’re also offering 25 customer video case studies on CD that are free for the asking.

McKesson takes it in the shorts for suing a former pharma sales employee who bolted for medical supply competitor Henry Schein in 2004 even though he hadn’t signed a non-compete agreement. The judge dismissed McKesson’s suit, he countersued, and a jury just awarded the former employee $5 million and his new employer $6 million. McKesson says it will appeal.

New poll to your right: is CCHIT free of influence from HIMSS?

In the least-shocking news I’ve heard lately, Grady Hospital (GA), like pretty much every large medical center buying clinical systems these days, picks Epic for its $40 million project. Losers: Cerner, McKesson, and Siemens (although I certainly would have put Eclipsys above at least one if not two of those). Oddly enough, Grady chose Epic on price, which must be an industry first since they are invariably more expensive than everyone else. Here’s my prediction: Epic’s honest, but I bet Grady made some estimating error that will cost them at least double that $40 million, probably involving labor, maybe their own since they are struggling and may optimistically think they can do a lot of the work without paying expensive outsiders.

NAHAM (National Association of Healthcare Access Management) is having its annual conference right now in Las Vegas. Our friends at SCI Solutions are there, no doubt, and QuadraMed is showing its new consumer portal for scheduling. Reports from the field are welcome.

New insurer payment rankings from athenahealth: Humana goes to #1 as the best payer. The industry as a whole improved over last year as well, with claims paid 5.3% faster and denial rates down 9%.| 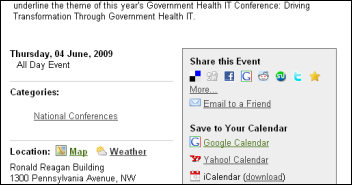 I took action on a suggestion readers have made a few times over the years: there is now an HIStalk Calendar to keep track of industry events (there’s also a link at the top of each HIStalk page and links to upcoming events in the right column). Some cool features: users can submit their own events, it accepts rich text and graphics, and each event has a link to see a map and current weather. You can even download an event to your calendar, e-mail it, or share it on Twitter and a bunch of other online services. Feel free to share your events, although you won’t see them until I approve them (to keep out the inevitable spammers).

Atul Gawande, maybe the best healthcare writer there is, covers McAllen, TX in his latest piece in The New Yorker. The issue: the town is poor and rural, but second only to Miami in healthcare costs per person. Local doctors blamed everything from obesity to lawsuits, but analysis revealed something none of them said: overuse of medicine, especially specialists and implantable devices, sometimes for the express purpose of enriching a hospital or a doctor. “Something even more worrisome is going on as well. In the war over the culture of medicine—the war over whether our country’s anchor model will be Mayo or McAllen—the Mayo model is losing. In the sharpest economic downturn that our health system has faced in half a century, many people in medicine don’t see why they should do the hard work of organizing themselves in ways that reduce waste and improve quality if it means sacrificing revenue.” I’ve been far less eloquent and entertaining than Atul, but my motto echoes his conclusion: people and companies are guided by economic principles that will lead them to the most profitable activities, so you can change their behavior only by intentionally or otherwise redirecting their profit motive to something more desirable. If you pay for procedures, you will get lots of procedures. If you pay for quality (assuming you can define it), you will get quality.

Health officials in a Chinese province are forced to make a public denial after a widespread Internet rumor suggested that many of its doctors got AIDS after having sex with a female drug rep in return for prescribing her company’s products. The press-unfriendly police “briefly detained” a former patient who was believed to have started the rumor, after which he apologized, even though other doctors said it wouldn’t surprise them since medical bribery is standard procedure. A Chinese economics researcher stated the obvious about medicine in both China and the US: drug companies have access to information to tell them who’s prescribing, so it’s not surprising they try to influence the holdouts.

Accenture, always geographically creative in avoiding paying US taxes, moves its “headquarters” from Bermuda to Ireland. If you want to buy American, it ain’t them (which you already knew since many of its employees work in cheap labor countries like India and the Philippines). It’s not just them, of course — I’ve been to the Caymans and all those corporations headquartered there must have short executives since their entire corporate office fits neatly in a standard post office box. Not their fault – Uncle Sam should just close the loophole by saying if you do more than $1 million in business here, you’re taxed the same as a domestic corporation.

A CBC article criticizes eHealth Ontario’s contracting practices, claiming that nearly $5 million in deals were signed with Courtyard Group and Accenture (begorrah!) without seeking other bidders. It also criticizes the organization’s salaries, noting that 164 employees make over $100K and hiring consultants keeps other names off that list (the CEO is paid $380K plus she got a $114K bonus five months after she started). Two consultants listed as SVPs on its site cost $1.5 million a year, including flights from their homes, per diem, and hotels. Most personally, it notes that one consultant listed as SVP was charging $3,000 a day as a consultant, while the company his wife owns got $300K in contracts, billing $300 an hour read newspaper articles and check holiday voicemail greetings. The CEO’s rebuttal: we chose single-source vendors because of urgency and we had to pay market rates to get the best people available. You will want to read at least some of the 200+ comments left, one of which notes, “This is one of the many reasons why we have a 50 billion deficit. We are no better than the US….ridiculously high salaries for top level management, high bonuses, over-priced contracts, unnecessary projects, no accountability and worst of all a government that no one has any respect for.”

New York City agrees to pay $2 million to the family of a woman who collapsed and died on the floor of the psychiatric ward at Kings County Hospital Center last year. The patient had waited more than 24 hours to be treated and lay on the floor for more than an hour while workers did nothing to help her.

Mayo Clinic finds that when surgical teams participate in preoperative briefings prior to cardiac surgery, communication is improved, errors are reduced, and costs are lowered. Teams participating in the pre-op briefings reduced miscommunication problems during surgery by 53% and decreased their medical supply waste. I’m now analyzing the amazing parallels between surgery and marriage.

McKesson declares a regular dividend of $.12/share of common stock, payable July 1st to all stockholders of record on June 10th.

Elsevier Health Sciences appoints Chris Dillon managing director for its Clinical Decision Support group. Dillon is a former VP of marketing for both Misys and McKesson.

DeKalb Medical (GA) selects MRO Corp. to provide its ROI Online software and services. In case you are slow like me, “ROI” stands for release of information, as in managing the release of medical record information.

Misys reaches a new three-year financing agreement to help repay the debt created from the Allscripts merger. The $335 million deal involves five different banks and includes a term loan and a revolving credit facility. Funds will be used to repay $150 million in bank debt plus $190 million to ValueAct Capital.

A West Virginia woman sues a hospital after a parking gate arm comes down on her head, knocking her unconscious. The woman, who was on oxygen and used a walker, claims the hospital was negligent because traffic cones had directed pedestrians to walk near the parking gate arm.

Here’s a curious quiz. The results suggest I am a liberal (since I like the idea of slapping authority figures and don’t have a problem drinking out of anyone’s wine glass).