From RSNA Body: "Re: RSNA. Don’t believe this RSNA whitewash about attendance. These were pre-attendance numbers — wait for the audited RFID traffic numbers. I was there and, for the first time, there were hardly any lines for anything. I spoke to cabbies, bus drivers, restaurateurs, vendors, etc. who all reported thin crowds. One cabbie asked me on Wednesday if the radiology show was over because he said the traffic was so light. Several vendors told me that a number of hospital customer contingents had cancelled their RSNA trip or only sent a few rather than the scheduled dozen or so staff. With IT vendor layoffs since November and a worsening economy, I predict a huge decrease in HIMSS attendance." You’re probably right. Conferences, like sports venues, have been known to report big attendance despite obviously empty seats.

From Eclipsys on the Ropes?: "Re: Eclipsys. I understand that McKesson just took another revenue cycle customer away from Eclipsys: ‘Baptist Healthcare System Selects McKesson to Optimize Physician Revenue.’ Can you verify this for your readers?  If so, it seems like Eclipsys is in a certain death spiral. Also, the client that represents 10% of the ECLP revenue is probably North Shore Long Island Jewish since they have both outsourcing and software." I’ll have to call in a lifeline on that because I have no idea. It’s the Baptist group in Kentucky that contracted with McKesson for physician revenue cycle management. I don’t recall hearing anything about Eclipsys there, but it may well be. Update: the group is not an Eclipsys customer, so the reader’s understanding is incorrect (to the other reader who said my facts are incorrect, they aren’t my facts: the blue text is a reader’s question; my answer in black text was "don’t know, never heard of ECLP being there.")

From I’m Just Saying: "Re: Eclipsys. The 10% of revenues client may be Baylor. Also, expect more layoffs this week in Services. One VP resigned in December (J. Bell) and two others were termed last week (B. Pille & D. Tom). J&J could be a good answer." 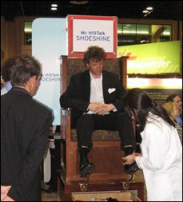 HIMSS is not too many weeks away. I haven’t come up with any HIStalk-related activities yet since I’ve been swamped, but we’ll have some HIStech Report interviews coming very soon. The conference was awash last year in Fake Ingas, HIStalk shoeshines, badge ribbons, the big bash, and probably stuff I’ve forgotten (like that $1,000 worth of tote bags I bought – is anyone still using theirs or did I waste my money?) I’m open to ideas from vendors on anything that would be cool for readers.

A Georgia family puts everything they own except their house up for auction on eBay to pay the medical bills of their children, a 7-year-old with an autoimmune disease and another with autism.

Speaking of jobs, several folks at Eclipsys lost theirs this week, which I reported as a rumor on Wednesday. At least 100 have been shown the door, a couple of folks say, and the purge may not be over yet.

And speaking of layoffs, Children’s Hospital of the King’s Daughters (VA) laid off 28 employees on Friday and also cut 90 unfilled positions. It’s also shutting down its child care center. Mike e-mailed about Alegent Health (NE – Immanuel Medical Center pictured above), which laid off seven VPs this week and will eliminate 285 more positions by March. It also forced 20 senior managers to take a 10% pay cut.

And more layoffs: GE Healthcare dumps an unnamed number of employees in Burlington, somewhere between 8 and 39 given their sketchy announced percentage range. The staggering giant has never been forthright about its cutbacks in the old IDX office, probably due more to smothering bureaucracy rather than intentional obfuscation. Kind of like when Jeff Immelt put on his happy face about GE Capital while the rest of the world (me, anyway) proclaimed loudly that the company could not possibly avoid fallout from the financial sector meltdown. Let the record show that Jeff was way wrong: GE’s Q4 numbers announced Friday after the market close showed revenue down 5%, EPS $0.35 vs. $0.66. GE Healthcare’s profits were down 9%. The stock dropped nearly 11% during Friday trading and is down another 11% after hours.

Intel’s chairman Craig Barrett will retire in May. He’s been loud about healthcare and technology (I quoted him in July 2007), so maybe we’ve not seen the last of him.

Two PricewaterhouseCoopers executives in India are arrested and charged with conspiracy for the company’s role in signing off as auditor on the books of Satyam Computer Services, whose chairman admitted that $1 billion of claimed cash didn’t exist. I mostly associate PWC with dumb names: its own and the one it announced for its consulting organization in 2002, "Monday," which thankfully never happened because the company sold the whole organization to IBM just five months later.

The State of Massachusetts signed a big mandatory EMR law in August with $25 million a year in funding to get doctors online by 2015. The state cut the budget to $15 million two months later, which everybody agrees is far short of what’s needed to get the job done. Also agreed, judging from the comments, is that not much benefit has been derived so far.

McKesson CEO John Hammergren gets his name and picture in The Wall Street Journal, although it’s hardly a flattering mention. The article addresses the methods companies use to calculate executive pension value into a single lump sum payment, with some using an obsolete federal formula that boosts the number as "a sneaky way to give executives larger pay." McKesson tweaked the formula for Hammergren last March, jumping his parting gift’s value to $85 million (everybody’s outraged about healthcare costs, so you might think that would raise an eyebrow or two).

Former QuadraMed CEO Larry English gets a new job as CEO of CIFG Holding, Ltd., a Bermuda-based holding company running a French bond insurer recently bailed out after getting burned on derivatives. 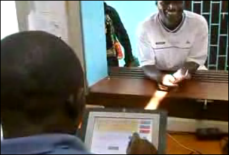 Think we’ve got healthcare challenges? Malawi has 14 million people, of which 1 million are HIV positive, and only 280 doctors. Their answer: treatment protocols managed by non-physicians using touch screen clinical workstations (developed in Ruby on Rails) at the point of care. Scroll down for several YouTube demos. It would never work here, of course, because vendors couldn’t load it down with proprietary bells and whistles to boost the price. Still, you have to like this quote extolling the virtues of designing systems to take the use through a consistent, guided function (which I always argue in saying that charting a med should be as easy as the import wizard in Excel): "If the system is useful, then other people want to use the system. This is a nice problem that gets solved with…training! But soon, the developer notices that users keep using the system in a way that was totally unexpected. Time for another training session… But there is another approach that doesn’t rely on training. They are called constraints … The amount of training required is usually inversely proportional to the number of constraints in the system.."

Two sides of a Connecticut hospital’s proposed health information exchange. Pro: the hospital is raising money for the $8 million project and hopes the federal government will pay for it while it’s slinging money around. Con: the president of the state medical society says the government shouldn’t pay because mandated physician usage would just make the state’s doctor shortage worse because they’d steer clear of Connecticut.

Odd lawsuit: a mentally disturbed female prisoner is taken by corrections officers to a hospital for psychiatric treatment, where she "went berserk" and bit the nurse’s hand. The officers watched and did nothing, later saying they believed it was outside their jurisdiction. The nurse is suing the city.