From Carmine DePasto: “Re: EMR. The picture with the Cerner rollout in Abu Dhabi looks like NextGen’s EMR. Did you have an oops?” No, that was a sinister subliminal message to buy stuff from HIStalk sponsor NextGen. That’s my story and I’m sticking to it. Actually, I snipped the picture from the article I linked to, a testament to both that site’s inaccuracy and my inattentiveness.

From Charm Leachman: “Re: struggling vendor you mentioned. I believe one of our competitors took that post, attached our name to it, and forwarded it to a hospital in an effort to win back the business that they lost.” Yessir, that’s a real scumbag competitor there. It wasn’t Charm’s company. It wasn’t even a well known company, in fact. It must be getting mighty ugly out there in the sales trenches.

From The PACS Designer: "Re: thick client vs. PDA. The Personal Digital Assistant is starting to resemble a thick client workstation. A company TPD is all too familiar with from past work relationships has ported their image viewing expertise to the PDA, specifically the iPhone, using software called Osirix. The YouTube video will give you a view of a workstation-like session." Link. 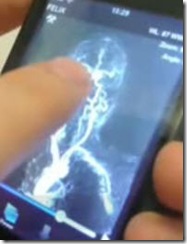 From Marketing Girl: "Re: bad press release. This was a horrible press release which shouldn’t have seen the light of day. I’m holding out hope that maybe, just maybe, the writer is brilliantly trying to use this press release to feed the search engine spiders. Press releases are a great (free) way to use oft-searched content to increase your site’s search engine ranking. I say this as I note the liberal use of competitor names, healthcare trends, and general hooey. This site http://linuxmednews.com/ already has a link to this PR, proving someone actually read it. But, as I still can’t find their website in the first two pages of Google using their own keywords (to see for yourself, go to IE and View/Source), I assume the spiders are still hungry. Or at least they aren’t feasting on this press release." I’m thinking about grading press releases. Someone should call out the duds.

From augurPharmacist: "Re: barcoding. Actually, as much as I agree wholeheartedly with Mort R. Pescle regarding intra-pharmacy bar code validation steps, it is not accurate to write ‘No technology can detect having the wrong dose drawn up of the right drug.’ In fact, chromatography, spectroscopy, and other technologies CAN be used to confirm the concentrations of particular drug solutes in solution. Take a look at what Valimed provides to the market, for instance. Remember also that the determination of concentrations of drugs is solution is very familiar in the hospital environment in another area, the clinical lab. Pharmacy could be doing many more solution concentration assays in our hospital pharmacies to provide QA for IV products, especially for IVs that are made in batches." I found Valimed and it was interesting, although not too practical if you have to pull a sample from every bag to check it. Maybe IV bag manufacturers should provide a standard "read port" that the assay machines could read from without needing a sample. While they’re at it, it would be nice to provide a penetrated port indicator since I bet many incidents either involve no drug added at all or the same drug added twice.

From Johnny Journalist: "Re: Siemens layoffs. The company won’t divulge specifics, but it sounds like a bloodbath." Think Virginia Hospital Center is happy about that news since they just announced a $14 million Soarian purchase? I hope they locked in resources. The Siemens spokesperson never bothered to reply to my inquiry, so if you were affected or have details, let me know so I’ll have at least one viewpoint to present. I did find a tiny mention in local paper – 350 Malvern heads rolled as part of the overall 16,000 company jobs the company eliminated, so that’s close to what the rumor reporters told me (not including the offshore resources). Too bad employees had to suffer for all those bribes the company admitted its execs were slipping under the table worldwide.

From King Buzzo: "Re: MD to CIO. CHOP just promoted Bryan Wolf, MD, PhD, to SVP/ CIO from pathologist-in-chief. Has this been successful in other healthcare organizations?" Physicians, yes (Halamka and Nigrin come to mind from a short list) but I wouldn’t expect pathologists, who in my experience rarely have the skills or patience for the glad-handing and tolerance of the glacial progress that’s involved. Lab people are, of all healthcare professions, the most collectively comfortable with technology, but CIO isn’t a technology job. In fact, if you love technology and care deeply for patients, it will probably drive you nuts to see how hard it is to make serious improvements through technology with all the politics that are put in the way. Wide-eyed newbs with big ideas usually end up in a fetal position or consulting. 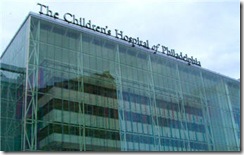 Listening: The Melvins, anti-establishment but massively influential proto-grunge. And HIStalk radio, of course.

Inga noticed that HIStalk just had its 1.5 millionth visitor. It doesn’t seem very long ago that we hit the magic million mark.

The St. Louis paper says healthcare IT jobs are hot, at least if you don’t work for one of the many vendors that are eliminating them (from the survey to your right, 1/3 of HIStalk readers work for a company that’s laid people off in the last two months.)

New text ad to your right, which will be of interest if you’re involved with outpatient rehab in any capacity (except as a patient, anyway).

TV business reporter Alexis Glick does some fawning over Jonathan Bush. I don’t watch much TV, but I caught Morning Joe the other day while getting my oil changed and not only liked it, found co-host Mika Brzezinski sassy and cute, which is pretty shocking if you remember her dad Zbigniew from the Carter years. I also have no interest in the Olympics (synchronized diving is sport??) , although in celebrating human accomplishment and worldwide good will, I carefully watched the women’s beach volleyball matches last night (and made jockular comments to Mrs. HIStalk so my interest wouldn’t seem prurient).

Someone tells me that Misys isn’t supposed to sell any MyWay deals until their spat with its own iMedica is involved, so that had to make a tough sales job even less fun.

No snide comments: patients in England are being dumped by dentists. Privatization is the problem (or solution, depending on which side of the table you’re on).

McKesson is named in a wrongful death lawsuit against Avandia for some reason (because its trucks dropped it off at the hospital’s loading dock?)

FiatLux, the medical imaging company founded by some Microserfs a year ago, has its first product hit the market this week. They worked in video games, so images are sent to remote devices that display them with DirectX at $2,800 per license (but I found a $1,000 discount here).

The CEO of imaging vendor Merge Healthcare, part of new management team mostly placed there from its new investor, says the company’s bad days (over $450 million in losses in two years) are behind it. The stock price is up (although still 66% off the 52-week high) and market cap is up to a modest $54 million. Q2 results: revenue down a little, EPS -$0.45 vs. -$0.32, with high-fives premature.

InterSystems wants to block Microsoft from building a research center in its building in Cambridge, MA. They’re suing MSFT and the building’s owner, complaining that the landlord took Microsoft’s offer of nearly double what InterSystems pays per square foot (shocker). That argument doesn’t make much sense and neither does the second one: that InterSystems doesn’t want its employees fraternizing with the competition and they don’t want to work under a Microsoft sign on the roof.

From Dr. Otto Octavius: “Re: device connectivity. A big push over the past few years has been to capture the information to populate flow sheets in the EMR, with most vendors using Capsule. The limitation is that. once in the EMR, the information is dated. Telemedicine, JCAHO, and IHI want systems that immediately respond to changes in a patient’s condition, with central surveillance of devices as a front-end technology. However, many hospitals have, through the IT department, committed their only device output the EMR, leaving to competition for data access. Real-time is critical for monitoring adverse outcomes, so it will be interesting to see how device manufacturers respond. I agree that the agnostic middleware vendors will have significant market opportunities.”

From Paul Brient: “Re: PatientKeeper funding. Thanks for the mention! This is a very exciting time for PatientKeeper. In the past year we have signed a record number of new customers, including HCA and Catholic Health Initiatives – two of the largest health systems in the country. This funding will help us continue to innovate as we expand our operations and infrastructure to accommodate new customers, build additional new products, and support continued growth moving forward.” Paul is PatientKeeper’s CEO and is referring to the recent announcement that his company secured $7.5 million in VC funding to accommodate additional product development and company growth.

Michael Leavitt’s solution for fixing the health care sector is to create a new acronym (since we don’t have enough). Leavitt proposes the formation of Chartered Value Exchanges (CVEs), which are community-based collaborations among providers, employers, health plans, and consumers. The CVEs will provide local control for health IT standards and quality controls. Leavitt discussed the topic at a recent Town Hall meeting in NC. Leaders of the NC Healthcare Information and Communications Alliance liked the idea so much they passed a resolution to create their own version. No word yet on the correct pronunciation for CVE.

Sentillion issues 152,400 new user licenses for its identity and access management in Q2.

Second Life founder Philip Rosedale admits that majority of people who try out the product don’t stay. Instead, they are like Mr. H, who try it for a short time, are unable to get it started or work in a useful way, and don’t come back. Rosedale doesn’t sound too worried and indicates the market and product are still evolving.

Tammi DeVore, senior healthcare marketing manager for (HIStalk sponsor) AT&T, tells me that (not surprisingly) iPhones have been “crazy popular” with docs, who are downloading ePocrates in huge numbers.

Ten physician groups share $16.7 million in incentive payments for providing improved quality of care during the second year of CMS’s Physician Group Practice Demonstration. The program rewards providers for improved outcomes delivered to Medicare patients with congestive heart failure, coronary artery disease, and diabetes. The CMS press release does not indicate the number of physicians involved or an average payment per doctor, which I think would be an interesting statistic.

Tennessee RHIO CareSpark announces it is now online and operational. The infrastructure is now in place to permit secure medical record sharing among physicians, hospitals, and other healthcare facilities. A patient portal will follow. Will anyone use it?

I’m thinking this is pretty cheesy, but what do I know? CollaborateMD issues a press release announcing a discounted upgrade program for existing Medisoft, Lytec, Altapoint, Medical Manager, and Misys users. My favorite part is the clause stating the program is valid only through “4pm EST August 29, 2008.” Kind of reminds me of those TV commercials where you get an extra liter of cleaning supplies if you call in the next two hours (!)